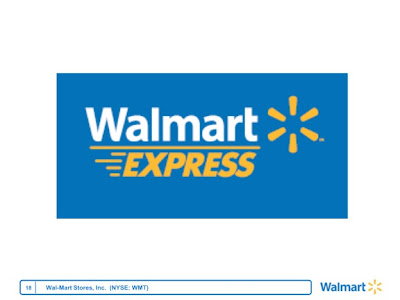 Walmart Stores, Inc. today unveiled the new logo (above) for its new "Walmart Express" convenience-oriented, food and grocery-focused smaller-format stores. Express is one of three new smaller-format store banners that Walmart has either launched ("Walmart on Campus") or is preparing to launch. The third format and banner is "Walmart Market."

The logo unveiling was part of a presentation made today by Walmart U.S. president and CEO Bill Simon, at the Bank of America Merrill Lynch Consumer Conference.

At the conference Simon also said Walmart will rebrand its "Walmart Neighborhood Market" to "Walmart Market." You can view the "Walmart Market" logo here. You can also view a slideshow of Simon's presentation at today's conference here. 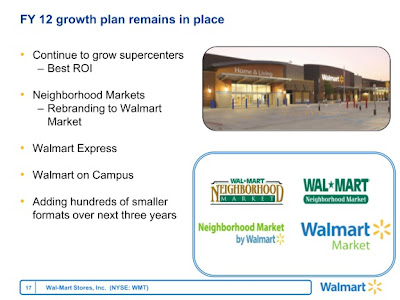 The head of Walmart's U.S. division said today the retailer plans to open hundreds of smaller-format stores over the next three years under the "Walmart Market," "Walmart Express," "Walmart on Campus," and perhaps other formats and names.

Walmart Stores opened its first "Walmart on Campus" store early this year on the University of Arkansas, Fayetteville campus. The store is about 3,500 square-feet. It offers a selection of convenience-oriented food, grocery and general merchandise items and has a pharmacy.

Simon said today Walmart's smaller-format push also includes possible acquisitions, which is something we've previously reported the mega-retailer from Bentonville has been considering doing. Among the potential acquisitions we've suggested readers look for is, on a national scale, the Rite-Aid drug chain. As we've said, Rite-Aid is ripe for an acquisition, as it's value has been in penny stock territory for far to long.

Also look for Walmart to make various regional acquisitions as part of its smaller store strategy, particular if it can find suitable deals in places where it plans to significantly focus the smaller stores, such as California, the Pacific Northwest, metro Chicago, New York and other east coast and New England regions.

Look particularly for Walmart to focus any such acquisitions in urban regions, again in U.S. regions where it has little current retailing presence. For example, sources recently told us Walmart has looked at some of the smaller stores A&P supermarkets is selling, and might sell if the offer is decent, in New York City and other metropolitan region on the east coast.

Approval of any acquisitions won't be a piece-of-pie for Walmart however, particularly any bog ones. Walmart's Simon said today, confirming what we reported in our piece yesterday, that the "Walmart Express" stores will be 15,000 square-feet. He said Walmart Stores plans to test different mixes of products in the first batch of "Walmart Express" stores as it fine tunes the new convenience-oriented format. "We are going to be adding hundreds of these in the coming years, and maybe more, depending on how these work out," he said.

The Walmart USA chief wouldn't say where the first "Walmart Express" stores will open, instead saying "secret handshake" is required to learn that information. But secret handshakes aside, we reported on where, and when, the first three units will be in our story yesterday here: Going Rural: First Three Smaller-Format 'Walmart Express' Stores Will Be in Small Town Arkansas.

Here's some more of what Simon said about the retailer's smaller-format store plans, and how it fits in with Walmart USA's multi-channel strategy:

"We have been hard at work on this roughly 15,000 square-foot format ['Walmart Express.'] We're in the process of developing and we will open in the second quarter in both urban and rural pilots with pharmacy and without pharmacy, varying levels of fresh and other products, product assortment. The aim here, folks, is to get the right model so that we can rapidly roll these things out. At our peak we built about 350 supercenters in a year, so when we get this thing right, these are going to come real fast and we're real excited about this format.

We've been working kind of -- trying to work beneath the radar on this thing, although some of it has been a little bit above the radar I guess as you would say, and in the papers recently.

And there are also a couple of prototypes that have been built in super secret locations that I can't tell anybody about and there's a secret handshake to get in. But they're really, really nice and I think what you will see is a real effective implementation of a strategy that takes a continuum of retail from the -- as close as you can get to -- the small formats as close to the customer as you can get has the high velocity items that the customer wants as you move through the size from Express to market supercenter, you can flex inventory and assortment based on what the customer wants.

And if you overlay all of that with walmart.com and the multichannel experience, you can have whatever you want, whenever you want in a seamless supply chain. That is incredibly powerful and that's what we will be working on when these things open in the second quarter.

We also opened our first Walmart on Campus as a really, really cool format that the first on is on the campus of the University of Arkansas. We like to try things close to home so we can see it and play with it and tweak it a little bit. Frankly it's doing way better than anybody anticipated. It has a pharmacy in it and it serves the college students on campus with the pharmacy. A great, great price, as you know, from our pharmacy offering as well as pretty well everything that a college student needs with an almost endless supply of macaroni and cheese and Ramen noodles along with everything else that they go with.

There's been a lot of interest from a lot of other college campuses, the universities on this project, and it's something that we think is going to play out pretty well for us.

Small formats: I want to take just a minute to talk to you about it. It's something that is not new to Walmart, not new at all. We have -- in fact, most of our markets around the world operate small formats from Todo Dia in Brazil to Bodegas in Mexico, ChangoMas is in Argentina, PALi is in Central America, this one is from Costa Rica.

We run small formats all over the world and these small boxes are among the most profitable businesses that these countries run. So as we borrow and learn from them to build the US small format portfolio, we think we can deliver that end-to-end continuum that will give access to customers wherever they might be with the products that are most relevant to them in the markets that they are in.

And that's the last bullet point here and that's the multichannel element of this thing. The whole thing becomes kind of turbocharged or supercharged or multiplier with multichannel. We believe we are in a unique position in that we operate in more than one channel. There are lots of great brick-and-mortar retailers. There is coming on to be many, many great e-commerce players. But nobody who has the e-commerce business that we have at Wal-Mart.com where the business is just terrific and the brick-and-mortar business that we have, if we can enable all of these formats digitally to provide this experience to the customer."

Simon also said at today's investor conference that Walmart is expanding expanding its "Pick Up Today," program, which allows customers to order and purchase items online at Walmart.com and pick them up in stores. The program is currently available in 750 stores but will be expanded to nearly 3,600 locations by June, Simon said. Walmart issued a press release on the expansion of its "click and pick up" program today. you can read it here.

We discussed how the "Pick Up Today" program, which Simon says he want to change to "Pick Up Now," and expansion might fit in with Walmart's new smaller-store strategy in our piece yesterday, which is linked above.

In summing up Walmart's current smaller-store strategy, at present the retailer is focusing on three formats and three banners:

>"Walmart Express," which are food and grocery-focused but not exclusively, convenience-oriented stores designed to be located in urban and rural areas primarily. The stores can be as small as 5,000 square-feet but likely will average about 15,000 square-feet in size. (See our piece from yesterday for additional details.)

>"Walmart Market," which will include all of the existing "Walmart Neighborhood Market" stores (the rebranding) as well as new units. The stores will vary in size from 25,000 to 30,000 square feet to as high as 60,000 to 70,000 square feet. The geographic focus of the format is suburban, urban and rural.

>"Walmart on Campus," which is similar to the "Walmart Express" format but focused on college and university campus locations. Sizes will range from about 3,000 square-feet to about 5,000 square-feet. Some units could be slightly smaller, others slightly larger. It all depends on the locations and some additinal variables.

It's important to note that Simon made zero mention of Walmart's "marketside by Walmart" format and existing four stores in suburban Arizona today. That's because, as we've been reporting for some time, the format is going away.

Walmart U.S. president and CEO Bill Simon talked about numerous other aspects of the retailer's U.S. business, including plans and strategies, at the Bank of America conference today. You can view a full-transcript of his presentation here. There's also a webcast you can view here.

Fresh & Easy Buzz will be offering additional analysis on Walmart's smaller-store plans and strategies, in the coming days, as we've been doing extensively for over three years. Stay tuned.