A 'Sign of the Times': New Form of Customization and Localization Spotted at Fresno Fresh & Easy Store 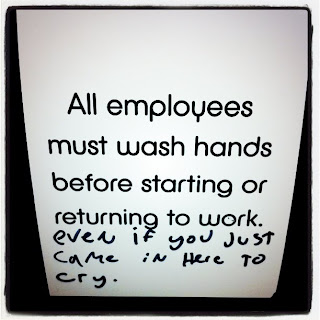 The "Sign of the Times" pictured above was spotted and photographed today by @thehieb (on Twitter) at the Fresh & Easy Neighborhood Market store at Cedar and Nees (3040 North Cedar Avenue) in Fresno, California. Tesco has seven Fresh & Easy markets in the Fresno metro region.
As you can see in the photo at top, the store manager, most likely, or a store employee, decided to customize and localize the Fresh & Easy Neighborhood Market standard issue corporate sign, which the grocer installs in all the stores, by adding: "Even if you just came in here to cry" at the bottom, using what looks to be a Magic Marker.
Here at Fresh & Easy Buzz we've said since 2008 that one of Tesco's week points with its 169 Fresh & Easy stores in California, Nevada and Arizona is senior management's failure to customize and localize its stores based on the demographics and lifestyle criteria in the neighborhoods where the stores are located. But we frankly haven't thought about doing the same with the hand wash signs. But then we can't think of everything.
One example of our lack of custom and local-focused product mix critique of Fresh & Easy is this: The Fresh & Easy stores in Riverside and San Bernardino counties in Southern California, which just-released U.S. Census Bureau figures show both have a population that's nearly 50% Latino, as is the case in many other parts of Southern California, the Central Valley and metro Phoenix, Arizona, is identical to the product mix in the stores where the Latino population is less than 10%, such as in parts of Southern California's Orange County.
The store-level Fresh & Easy managers can't doing anything about the product merchandise mix situation however: It's controlled and dictated by Fresh & Easy Neighborhood Market's corporate buying and merchandising department in El Segundo, California.
But in the case of the standard issue hand washing sign, one of which goes up inside every Fresh & Easy store when it's built, it does appear that some customization and localization is going on at store-level, at least at the Fresno store at Cedar and Nees.
And in terms of the 'crying in the bathroom' customization aspect and the local angle explanation, Fresno currently suffering from a variety of economic ills, including having an unemployment rate of about 15%, along with having one of the highest housing foreclosure rates in the U.S. So perhaps that's it? At least we hope its that or something similar in the macro sense that might elicit the potential crying in the bathroom rather than the crying being a reflection on how the store employees feel on a regular basis because of store management.
Either way, it's a creative form of store-level customization and localization. And it's ... a "Sign of the Times."
[Readers: If you spot something you think is unique at a Fresh & Easy store, or in any grocery store or supermarket, shoot a photograph of it and send it to us at freshneasybuzz@yahoo.com. Or if you use Twitter, tweet it to us @FreshNEasyBuzz. If we think it's a suitable "Sign of the Times" we'll use it in Fresh & Easy Buzz.]
Posted by Fresh & Easy Buzz at 10:47 PM