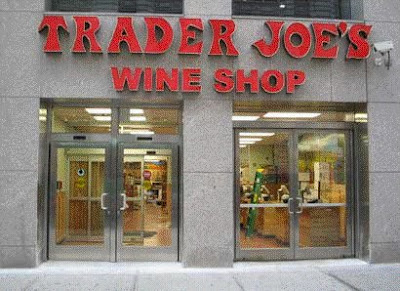 From the Fresh & Easy Buzz Editor's Desk: Specialty grocer Trader Joe's, which currently operates about 312 stores located throughout the United States, has become one of the premier wine retailers of any format in the country.

The grocer's $1.99 a bottle ($2.99 in some states) Charles Shaw proprietary-blend California wines, called "Two Buck Chuck" for short, took the U.S. wine consuming public and the wine industry by storm when they were introduced in the stores over a decade ago.

The wines took the wine industry by storm again in 2007 when Trader Joe's Charles Shaw Chardonnay, which sells for $1.99 a bottle in California where the grocery chain is headquartered, won the grand prize medal in the prestigious California State Fair Wine Competition, beating out wines that retail for ten times the price for the Double- Gold Medal.

Trader Joe's sells this high volume of wine in its stores by merely putting it on the shelf (self service), pricing it right and regularly featuring various varieties in off-shelf displays with colorful signage.

Of course, the grocer is able to do this because it has built a strong brand as a retailer that offers quality wines at discount prices over a multi-year period of time. The retailer also puts lots of effort into the wine category.

But it appears with the help of a wine and food specialist, Mike Samii, conducting a professional experiment, a Trader Joe's grocery market in San Diego, California sold even more wine, in a very short period of time, than the chain's already strong reputation for wine sales would otherwise even permit. In fact, we think it might be a world record of bottles of wine sold in a single store in a 45 minute period of time.

You can read the first-person account by chef and wine specialist Mike Samii about how he sold 37 bottles of wine in 45 minutes at a San Diego Trader Joe's store by just walking and talking to shoppers in the store. It's published below.

We think Mike Samii's experiment suggests having store employees who have wine knowledge helps increase wine sales. It's also a strong argument for those supermarkets that employee wine experts or wine stewards in-store. And in Mike Samii's case, he might want to hire himself out to wine retailers at a day rate.

My name is Mike Samii, and I am a Cordon Blue Chef. I have an extensive background in gastronomy and wine.

I shop at Trader Joe's regularly, and I always see people going up and down the aisles looking for a bottle of wine and not knowing what wine to take home. Frankly with the many choices, available, and not knowing what’s what, it is not always easy to choose the right wine.

So I decided to do an experiment one day. One Saturday this last summer, I walked in to one of the Trader Joe's stores in San Diego, California with a clipboard in my hand, pretending that I am writing down a list of wines I like to get for an event. I walked up to every customer that came to the wine section and started looking at the wines for a minute or two, and told them, without introduction, about how good certain wines were in the section and how they tasted.

And, except for a few of the customers, most of them looked at me like I was a god sent. Almost, everyone of them grabbed a bottle or two of the wines I suggested, and thanked me for it. One guy even took 9 bottles of wine and filled up his hand basket. Keeping track of how many bottles people took, my tally read 37 after 45 minutes. I was so gratified to be able to make a difference in some people’s lives by making them a little easier

[Fresh & Easy Buzz Editor's Note: Mike Samii is a Washington state-based chef, wine expert and consultant. For more information about Mike Samii you can go to: www.tastefullyamerican.com , or call him at 425-299-5819.]

>March 22, 2008: In Vino Veritas: No Whining About This 'Parker-Point' Rating for a Fresh & Easy Proprietary Spanish Wine

I can relate to Mike's experience as I have done the same. In fact that is why I started blogging. To create a place for conversation around Trader Joe's Wines. The good, the bad and the ugly!