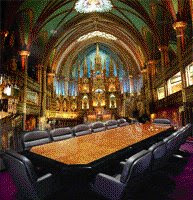 Is the importance of spirituality in society withering away? Earlier this year, the Vatican reported that the number of men and women in religious orders fell 10 percent between 2005 and 2006 alone -- a massive decline that mirrors the church's sagging membership across the Western world. Catholic schools are closing, parishes consolidating and Sunday attendance slipping.

But the Vatican is hardly alone.

The American Episcopal Church this year saw membership drop by 4 percent and growth among most Christian churches has not kept pace with overall U.S. population growth, according to several reports.

This is not to say that Americans aren't still seeking spirituality and meaning in their lives.

They're just finding it in new places -- like work.

From Google to Jet Blue and Patagonia to Trader Joe's, companies of all kinds are attempting to craft cultures and identities so idealistic that they could rightly be called "sacred." These companies are espousing these sacred ideals, values, beliefs, goals, behaviors and processes not only to attract and motivate employees and stakeholders but also as means to distinguish themselves from their competition. In fact, some say companies that take the sacred route may be able to offer something nearing spiritual fulfillment to customers and employees.

Recently, three W.P. Carey management researchers -- Professors Blake Ashforth and Kevin Corley and doctoral candidate Spencer Harrison -- set out to investigate what might be behind this trend.

The result of their research is a new paper, Organizational Sacralization and Sacrilege, that helps explain why companies are going sacred, why people seem to be embracing the idea and, maybe most interestingly, what happens when a company that has positioned itself as "sacred" violates the very principles it espouses.

"Organizations are increasingly adopting ideological stances -- mission statements, statements of purpose, credos -- that mimic values that are often considered transcendent, virtuous, even sacred," Harrison says. The result "is a 'graying' of the boundaries between the sacred and the secular, allowing organizations to behave in ways once attributed only to churches and religious orders."

It may seem somewhat of a leap that employees would find such deep meaning in their office cubicles. But the researchers insist the trend is a real one. Companies are doing this, they say. And they're doing it because it works.

"Companies are going to sacralize," Harrison says. "It's just a response to competitive dynamics and the need to stay structurally flat and increase nimbleness and innovation. So organizations replace bureaucracy with philosophy, levels of leadership with missions and meaning."

There may be no better example of the corporation as religion than Google -- the company that has famously proclaimed it will "do no evil."

Google's founders always "thought of themselves and Google as unique," the researchers write, and that became all the more clear as the company became widely known in the 1990s. As the
Google empire grew, the company's core beliefs became public, and began turning heads.

Among the company's espoused principles: "Life is beautiful; You can make money without doing evil; Uniting the world one user at a time."

Some might find this corny, but at Google headquarters, these aren't mere slogans. They are belief systems -- credos that helped create the sacred framework on which Google became one of the most respected, admired and even beloved corporations in the world.

Customers love Google -- and according to the W. P. Carey team, employees especially love Google. In the company's mission statement, these people have found purpose.

As they write: "Such proclamations, whether intentionally transcendental or not, began to provide the ideological raw material for individuals to seek transcendent experiences at work -
- to see work as sacred. As more individuals flocked to the company, these raw materials became more central to individuals' expressions of identification with Google and ultimately become institutionalized in religious rhetoric that characterizes the zeal with which people see the company."

Google isn't shy about its sacred ways. The company has hired a "chief Internet evangelist." Staffers only half-jokingly describe their company and its work as a "faith-based initiative."

Unconventional, yes, but all of the evangelizing certainly couldn't be said to be hurting the company's bottom line. Its stock is hovering around $445 and it remains the most dominant name in online search.

Of course, there is a risk to all of this.

As Google learned when it willingly submitted to the demands of Chinese government censors -- apparently giving in to the wishes of an oppressive regime simply for financial reward -- the backlash against companies which espouse sacred beliefs but then act in a way counter to those beliefs can be enormous.

In some ways, "sacred" firms face a greater risk of losing customers, simply because of the higher standards they've set for themselves. Even if these companies' projects and services are the best around, alienating customers through "evil" action is a real threat.

At least one company learned this the hard way.

The New York-based airline JetBlue has positioned itself from the start as the airline that actually cares about people. The company espouses a mission of bringing "humanity back to air travel." But to hear passengers tell it, the company did not act very humanely on Feb. 17, 2007. It was a day the company may not live down for years.

On that snowy, icy day, a JetBlue flight headed to Cancun from New York ended up being stranded on the runway for nearly nine hours. Repeated icing kept the plane grounded. At no point were passengers allowed to disembark. Horror stories emerged about the company's treatment of passengers, and the press pounced.

Making matters worse was the fact that several other JetBlue flights had the same problem on the same day. In the firestorm that followed, JetBlue was pilloried. Its stock tumbled. Analysts predicted the controversy would cost the company $30 million. The criticism grew so harsh that CEO David Neeleman eventually took the drastic public relations step of issuing an online apology to his customers and even ran full-page apology ads in several major newspapers.

In them, he begged for forgiveness: "Words cannot express how truly sorry we are for the anxiety, frustration and inconvenience that we caused. This is especially saddening because JetBlue was founded on the promise of bringing humanity back to air travel. We know we failed to deliver on this promise last week."

The company later created its own Passenger Bill of Rights and recommitted itself, internally, to its original "sacred" purpose.

But the PR damage was done -- and it was especially harmful, according to the researchers, because of the fact that JetBlue had so boldly positioned "above" other airlines in the first place.
As they write: "[Scandals such as the Jet Blue case] appear to incite a higher level of shock and moral outrage because … they contravene core ideals that have been rendered sacred by the organization. In rendering certain ideals sacred, the organization attracts strong supporters; supporters, however, that can turn on the organization with equal vehemence if those ideals are seen to have been violated."

JetBlue certainly suffered for violating its ideals, but at least it survived. The same could not be said for the late accounting firm Andersen. Once one of the pillars of the American accounting industry, Andersen had the misfortune of having among its clients probably the famously crooked company in American history: Enron.

And though it has since been revealed that much of the fraudulent financial maneuvering in that scandal was attributable to Enron executives, Andersen was not blameless. The company aided and abetted Enron's scam and was found guilty of obstruction of justice. Shortly thereafter, it ceased to exist.

The reason, Harrison says, is simple: The company acted in a way completely antithetical to what it claimed to be.

"One of the examples that was really striking for us was what happened to Arthur Andersen following the Enron scandal," Harrison says. "You can see how Andersen, by shredding documents, violated an inviolate principle. … Looking through the lens of "sacrilege," it becomes a case of ruining the fundamental purpose for existence. If accountants can't be trusted then why use them? It's equivalent to a hospital systematically breaking the Hippocratic Oath."

So yes, the researchers say, the danger is real. Sacralization brings inherent risk. It invites public relations nightmares when those sacred ideals are violated.

But that doesn't mean companies should avoid sacralization, Harrison says. Rather, it means simply that those who choose to pursue the righteous path must do so with great caution. They must, he says, practice what they preach.

"The difficulty for managers (and for anyone in a sacralized environment) is to realize the potential fragility of what pulls people together," Harrison says. "An ideal like Google's 'do no evil' provides a powerful rallying cry, until it is broken."

Companies of all kinds are increasingly adopting mission statements, statements of purpose, credos and belief systems that mimic, in some ways, organized religion.

This "sacralization" can provide a competitive edge for companies that employ it correctly, galvanizing staffers around the idea that their work is for a greater good. Google, especially, has successfully built a "sacred" culture -- and employees have bought into it.

With sacralization, however, comes risk. Companies that espouse sacred ideals and then violate them face harsher criticism than other companies.

For instance, JetBlue, which has long positioned itself as the airline that cares for its passengers, was pilloried for stranding some of its customers on a New York runway for nine hours.

[Copyright the Arizona Board of Regents at the W. P. Carey School, Arizona State University and the Wharton School of the University of Pennsylvania, Privacy Policy. Knowledge@W.P. Carey.]
Posted by Fresh & Easy Buzz at 7:37 PM