Video Blogger and YouTube creative force Chris, who also posts video spoofs at carlsfinefilms.com, isn't a member of the cult of Trader Joe's (TJ's), those millions of consumers who love the specialty grocer's stores and spend lots of money shopping at them. In fact, you could probably say Chris prefers pretty much all other grocers and grocery stores to TJ's -- perhaps because the iconic grocer has such a cult following. Such phenomenon are the seeds of video spoofs, after all.

Chris decided to express his opinion of Trader Joe's by making a TJ's commercial he would like to see, and posting it on YouTube, for all to see. He calls it: His "Unauthorized commercial for Trader Joe’s shot on my Palm Treo before I accidentally ran over it with my car." 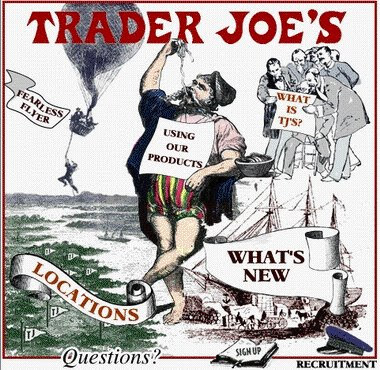 You can join the 171, 597 (and counting) viewers who've watched the "unauthorized" Trader Joe's spoof commercial spot, simply titled, "If I Made a Commercial for Trader Joe's," on YouTube by clicking here.

Note to Chris: Might an unauthorized commercial of Tesco's Fresh & Easy be in your future creative portfolio? Or Whole Foods Market... Wal-Mart?

Note to Readers: You can view additional, similar spots at: http://www.carlsfinefilms.com/.

[You can follow Fresh & Easy Buzz on Twitter.com at: www.twitter.com/freshneasybuzz]

That's actually a creative spot. Maybe Trader Joe's should buy it, edit out the negative stuff and run it as a commercial.