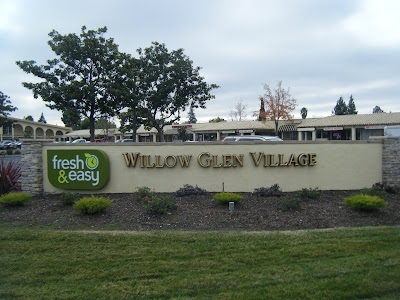 [Editor's Note: One December 27, 2010, we took a "first look" (which includes photographs) at one of the 11 Fresh & Easy food and grocery markets set to open in Northern California early this year. That store, in Pacifica, California near San Francisco, is scheduled to open March 9, 2011. [Read the story: December 27, 2010 - First Look at the Pacifica, California Fresh & Easy Neighborhood Market Store, One of the First Opening in Northern California in Early 2011.]

Today we take a "first look" at one of the two Fresh & Easy markets scheduled to open on March 2, 2011 - the store in the Willow Glen Village shopping center in San Jose, California. The store, along with one in Danville, are the forst two of the 11 Fresh & Easy stores opening in Northern California. Here's the opening schedule for the first 11 stores, along with the locations: January 12, 2011 - First Northern California Fresh & Easy Neighborhood Market Stores Opening March 2; Nine More to Follow March-April ]

Along with a store in Danville, which is in the East Bay Area, Tesco plans to open its long awaited (by residents of the neighborhood) Fresh & Easy fresh food and grocery market at Bird Avenue and Minnesota Avenue in San Jose's Willow Glen neighborhood, on March 2, 2010.

The store will be the retail grocery anchor in the Willow Glen Village shopping center. As you can see in the photograph at the top, which was taken on Friday, January 14, workers have installed a Fresh & Easy logo sign on the entrance to the shopping center, indicating the store's anchor status.

Tesco's Fresh & Easy Neighborhood Market announced the Willow Glen store location, which is going into a building the formerly housed an Albertsons supermarket, along with 17 other planned stores, in January 2008, when it took out a lease on the building. The retailer has been paying the monthly rent on the vacant building for three years.

Tesco stockholders can perhaps soon breath a little bit easier however. Construction workers are busy getting the store in the Willow Glen Village shopping center ready for its March 2 opening, which is fast approaching. If all goes according to its plans, less than two months from now Tesco will still have to pay the monthly rent on the building, but will have the added bonus of doing so for a store that's open for business. 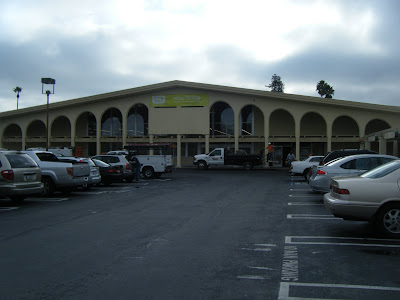 Pictured above: Work is in progress on the exterior of the Fresh & Easy market in the Willow Glen Village shopping center in San Jose, California's Willow Glen neighborhood.

The front of the store, above, faces about 90% of the parking lot in the shopping center. The cream-colored blank space, under the green "now hiring" banner on the store's facade, is where the "Fresh & Easy" logo sign will soon be mounted. As of Friday, when all of the photographs in this piece were taken by a Fresh & Easy Buzz correspondent, workers had yet to install the sign. But they say it's coming soon.

Pictured Below is a close-up of the front of the store and its facade. You can view the store's facade and the "now hiring" banner "up-close" in the picture below. 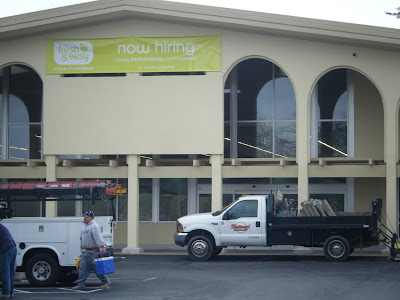 Interestingly, the closest grocery store to the small-format (about 12,000 square-foot) Fresh & Easy market opening on March 2 in the Willow Glen Village shopping center happens to be another small-format, neighborhood-oriented grocery store, Zanotto's Willow Glen Market, which is about the same size (10,000-12,000 square-feet) as the soon to be nearby Fresh & Easy market.

The Zanotto's market, at 1421 Foxworthy, is a five to- 10 minute drive from the Fresh & Easy store in the Willow Glen Village shopping center. The store opened in 2009.

The independently-owned grocery store, which you can view here, has an in-store service deli where clerks prepare sandwiches to order; a sushi and salad bar; offers grab-and-go-meals and what it calls meals in minutes; and also does catering.

In addition to the small-format Zanotto's market, there's a Safeway supermarket about five -to 10 minutes away from the Fresh & Easy store in the Willow Glen Village shopping center. The store, at, Hamilton and Meridian, is about 45,000 square-feet.

There's also a Lunardi's supermarket, at 4650 Meridiam, that's about 10 -to- 15 minutes away from the soon to open Fresh & Easy store. The medium-sized supermarket offers a complete selection of fresh food and grocery items, along with a healthy assortment of fresh-prepared foods and specialty, natural and organic products. Lunardi's Markets is a locally-based, family-owned chain of seven stores. It's been in business in the San Francisco Bay Area for 57 years.

For 40 years there's been another popular family-owned supermarket, Cosentino's, where many residents of the Willow Glen neighborhood have shopped for fresh food and grocers, and particularly produce, located about 10 -to- 15 minutes away from the Willow Glen Village shopping center, at 2666 South Bascom Avenue.

But last week the Cosentino brothers, who own the store and are all over age 70, announced they're closing the iconic local supermarket soon, saying none of the younger members of the family want to take it over. They've sold the store and the land they own around it for $10 million, and plan to retire. The Cosentino family has been in the food and grocery retailing business in the Bay Area for 63 years.

The store and surrounding land was purchased by a development company. It plans to put a shopping center on the land and is courting grocers to go into the Cosentino's store space. Among the grocer's interested include: Sprout's Farmers Market, Henry's Farmers Market and Whole Foods Market, according to our sources. As we've been reporting, in the case of Sprouts and Henry's, they could soon become one? [See - January 8, 2011: Smart & Final-Henry's Tell Employees About Deal Discussions With Sprouts Farmers Market; Confirming 'The Insider's' Reports.]

The Cosentino family, pioneers in San Francisco Bay Area food and grocery retailing, operated three supermarkets in the South Bay Area for many decades. They closed the other two over the last few years, keeping the flagship market on South Bascom in San Jose until now.

By the time Tesco opens its Fresh & Easy store at Bird and Minnesota on March 2, the iconic Cosentino's Market, famous for its fresh produce and meats, and it's focus on specialty foods, will be closed

[It wouldn't be a bad idea for Tesco's Fresh & Easy to reach out to the Cosentino's and offer one or more of the brothers a consulting contract. Not only could they give Tesco corporate director and Fresh & Easy Neighborhood Market CEO Tim Mason and his team a valuable history lesson on food and grocery retailing in the San Francisco Bay Area, they would, if listened to, likely save Tesco at least ten times whatever consulting fee they got paid.]

First, the immediate neighborhood is under-stored, based on the number of residents that live in it.

Additionally, the Zannotto's market has fairly high price points on basic food and grocery items. The Willow Glen Fresh & Easy store should be able to draw a customer base that needs or wants to spend less at the grocery store, without having to drive to Safeway, for example, because Fresh & Easy's overall price points come in lower than Zanotto's.

Lastly is convenience. There's a large population base right around the Willow Glen Village center. These customers should logically shop at Fresh & Easy, at least based on proximity, rather than travel over to Zanotto's or a bit further to Safeway or Lunardi's.

Of course, most consumers shop at multiple grocery stores today. For example, many residents of the Willow Glen neighborhood who shop at Safeway, for example, also go to Cosentino's for certain things (produce, meats, gourmet foods, its famous fried chicken), Lunardi's for other specialties, and Zanotto's for its sandwiches and fresh-prepared food offerings. The Fresh & Easy store will add another venue for multi-store shoppers in the area.

The Willow Glen neighborhood location will actually be a good test for the Fresh & Easy format because it has all of the elements of being a potentially good spot for a grocery store, particularly a small-format market. Therefore, if the store doesn't do well, it will be due as much or more to the Fresh & Easy format than anything else, which is why the location is a good test for the format. 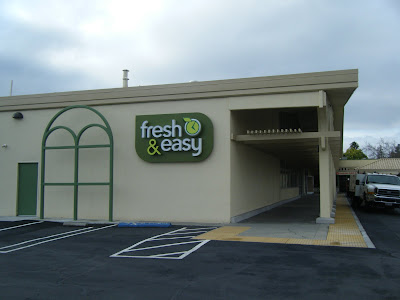 [Note to publications: You may use the photographs in the piece, as long as you include a photo credit to Fresh & Easy Buzz and a link to the blog under the photo.]

"Under stored" is right. We want this place to open like yesterday. This is prime position in Willow Glen (The closest grocery store off of the Alma ("willow glen") exit of the 87. Stone's throw from Downtown Willow Glen, and generally the logical choice for most in this neighborhood.

Just don't shoot yourselves in the foot with poor parking or slow checkout line throughput. It's a shoe in!!!

Oh man, you have no idea. Zanotto's is ok but as you mentioned in your article, the price point for non-specialty items in painful. What's more, just as Anonymous before me said, having to go all the way to safeway (which is bad, especially in traffic), this is a place that is easy to get to, and is in walking distance for a lot of people - people in this area very much like to get around on foot if they can, especially on weekends!