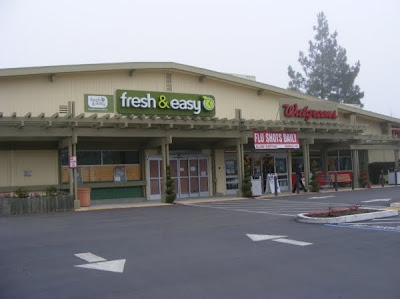 The Fresh & Easy store (pictured above), in the Green Valley Center in Danville, California is set to open March 2, 2011. [Photo credit: Doloros Fox-Ciardelli.]

On January 17, 2011, we offered a preview (including photographs) of the soon-to-be-opened Fresh & Easy market in the Willow Glen Village shopping center, in San Jose, California. [Read the story at: First Look at the Willow Glen-San Jose Fresh & Easy Neighborhood Market Store Set to Open March 2, 2011.]

The second Fresh & Easy store opening on March 2, is in the Green Valley Center, which is at Diablo Road and Interstate 680, in the East Bay Area city of Danville. 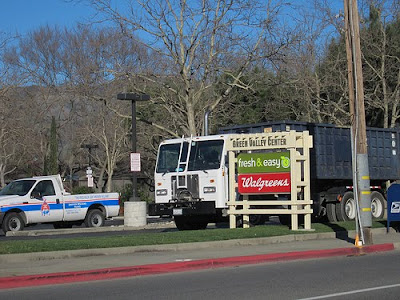 The Fresh & Easy sign pictured above recently went up next to the Walgreens sign at the entrance to the Green Valley Center in Danville, California. [Photo credit: Fresh & Easy Review/for Fresh & Easy Buzz.]

Danville is an affluent town. It has one of the highest average incomes in the nine-county San Francisco Bay Area, which is home to about seven million people. 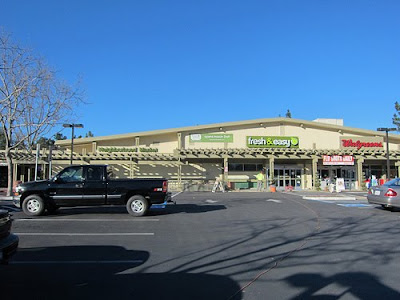 Side-by-side. The Fresh & Easy store in the Green Valley Center is next to a Walgreens drug store, as you can see in the photograph above. Locating the small-format (10,000-12,000 square-feet) fresh food and grocery markets close to (although seldom so close) Walgreens and CVS Pharmacy stores has been a strategy of Tesco's since it began opening the Fresh & Easy markets in November 2007. [Photo credit: Fresh & Easy Review/for Fresh & Easy Buzz.]

The Danville Fresh & Easy location is interesting for another reason, however, besides the city's high-income status. That reason: The store is located right next door to an existing Walgreens drug store. In fact, the Walgreens' store and the Fresh & Easy market in the Green Valley Center share the same building. The Walgreens, which opened in October 2009, took about half of the former Albertsons. the Fresh & Easy is in the other half.

What will soon be the Fresh & Easy store in the Danville shopping center was once an Albertsons supermarket, which was closed a numer of years ago because of its small size and its relative under-performance.

Tesco's Fresh & Easy acquired the then-vacant building in the Green Valley Center in January 2008, and has been paying the monthly lease on it since then.

The location could prove to be a good one for Tesco's Fresh & Easy for a few reasons.

First, its the only grocery store in the shopping center, although the Walgreens' does sell a limited assortment of grocery items, including some perishables, but not fresh meats or produce.

Additionally, the store isn't currently one of the Walgreens' units the retailer plans to add fresh foods to as part of its program announced in January of this year, in which it's expanding its 2010 test of offering an assortment of fresh-prepared foods, along with some fresh meats and produce, in a handful of stores in the Chicago metro region and New York City.

Lastly, the population demographics (high-income, high-percentage of college educated residents) and lifestyle (smaller families, busy professionals) indicators of Danville and the neighborhood surrounding the Green Valley Center index fairly high in terms of fresh-prepared foods' consumers. Since fresh-prepared foods are a major aspect of Fresh & Easy's offering, the location will prove to be a good test of the format, in an area where indications are it should do well. The shopping center is not far from the Blackhawk community, where the entry-level price for a home is about $1 million.

As you can see in the photographs, the exterior of the Fresh & Easy market in the shopping center is completed. Additionally, as the photograph below shows, most of the work on the store's interior has been completed. 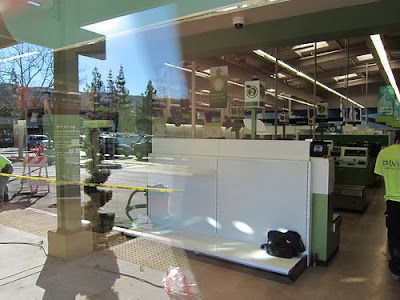 We will have more on the Green Valley Center-Danville Fresh & Easy store, along with all of the Northern California stores opening in March-April 2011, when it opens. But, like the title says - this is a first look.