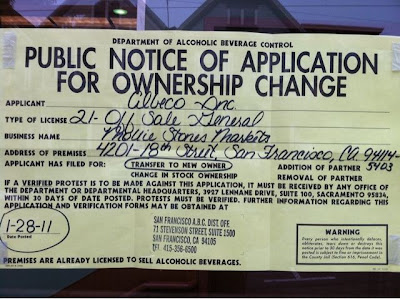 The change of ownership sign above was posted on the shuttered DeLano's IGA store at 4201 18th Street today.

In the late-1940's Caen, who also coined the term "Beatnik" in an April 1958 column and detested it whenever anyone called San Francisco "Frisco," gave "The City" another nickname, "Baghdad-by-the-Bay," which he coined to describe its exotic multiculturalism. The nickname caught on and continued to be used regularly by many San Franciscans half a century later, until President George W. Bush's invasion of Iraq in 2002, which cast Caen's definition in a completely different light, particularly in politically liberal San Francisco. 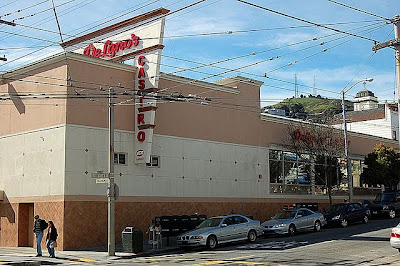 The now vacant (as of December 2010) 1960's-style DeLano's IGA Market store (pictured above) at 4201 18th Street in San Francisco's Castro District will be transformed into a Mollie Stone's Market by March 2011.

Yesterday Marin County-based privately-held Mollie Stone's Markets publicly announced its plans to open its ninth store at the Castro District location on 18th Street in March 2011 - and it did so using its Facebook and Twitter social media sites, along with its website, generating a considerable amount of buzz in the process, particularly on its Twitter.com feed.

The grocer set the stage for its new store announcement on its @mollie_stones Twitter feed yesterday, with the initial tweet below, at just before 2:10 pm:

Shortly after, the grocer made the new store announcement in the tweet below:

The bit.ly link in the tweet above is to a social media-based press release Mollie Stone's used to make the new store announcement, a good move since the use of the various social media sites is designed to create as much buzz as possible around the new store between now and March, when it opens.

In the press release, Mollie Stone's co-owner David Bennett says about the new store in San Francisco's Castro District: "Our Castro market will be our third store in San Francisco, and we are positively delighted to expand in our 'City by the Bay.' The Castro Market is in one of the finest and most vibrant neighborhoods in California; we believe it will beautifully blend with our Mollie Stone’s culture. We understand the passion and expectations in the neighborhood, and we will stop at nothing to provide an outstanding shopping experience. We look forward to developing strong, rewarding relationships with each and every customer."

Bennett, who along with partner Mike Stone are the majority-owners of Mollie Stone's Markets, goes on in the announcement release to describe the philosophy behind the grocer's locally-focused operations, customer service and merchandising approach, along with offering a shout out to a couple foreign-owned specialty grocery chains readers might be familiar with: "We don't believe bigger is better. We believe better is better. In this day and age when large national chains and foreign-owned specialty chains are vying for our local dollars and sales, Mollie Stone's offers locals the ability to keep all the revenues and spending here in the Bay Area. Mollie Stone’s is filling the void for old style hometown quality, selection, and service," Bennett says. "We specialize in catering to customers who need (and deserve) extra attention and hard to find products, or those who simply need help or assistance. Call us old fashioned, but Mollie Stone’s still treats customers one at a time. Always have. Always will." 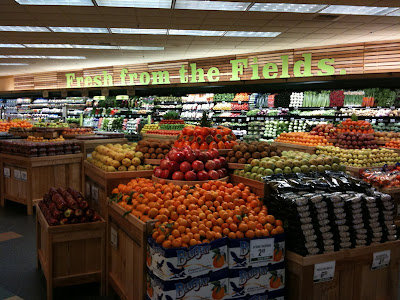 Fresh foods like produce are a key merchandising focus at Mollie Stone's Markets. Pictured above is the produce department at the grocer's store in the Bon Air Shopping Center, in the Marin County city of Greenbrae.

Following the Tweet announcing the new store, in which it encouraged followers to "retweet" (RT) it, Mollie Stone's offered additional tweets about the new store and its March 2011 opening throughout the day yesterday, along with "retweeting" tweets from many of its followers on Twitter, continuing to do so selectively through today. You can view the "Tweet" activity at the grocer's Twitter Feed: [www.twitter.com/mollie_stones]

Mollie Stone's "Tweeter-in-Chief" is also using the "TweetReach" analytical tool to track the new store buzz its creating, as well as to help in additional buzz creation. People on Twitter tend to like such quantification and analysis. Therefore, such tools not only serve their primary focus - to quantify - but can serve the secondary purpose of creating excitement around an announcement, topic or campaign because they also create an additive effect.

[Our Tweet: January 27, 2011: #Grocer @mollie_stones Confirms http://bit.ly/hRTtJC Our Report On New #SanFrancisco Store http://bit.ly/f43yQV #retail about 22 hours ago via web.

Interestingly, when we checked Mollie Stone's "TweetReach" Report for this story a few minutes ago, we noticed @freshneasybuzz is second, just below the grocer's own Twitter feed, in terms of the number of impressions generated by "13 Twitterers" regarding the new store announcement. Frankly, we're not sure how significant that ranking is - although it suggests our Tweets are being read - and had no master plan to achieve that lofty status when we posted our Tweet yesterday. But we must say - it does look rather impressive.

Beyond the buzz: Food retailing

But Friday frolicking aside regarding our being caught in the "Tweet-Stream," Mollie Stone's has so far created considerable social media buzz in the just 24-hours since it made the announcement about its plans to open its ninth store and third unit in San Francisco, at 4201 18th Street in San Francisco's Castro District, a neighborhood known throughout most of the world because of its famous history of successful gay activism.

But beyond the buzz, which despite the name of our blog is where we always like to go, the Castro District location at 4201 18th Street in San Francisco is a good one for Mollie Stone's (it also would have been good for Tesco's Fresh & Easy), as we explained in our January 13 story.

In fact, Mollie Stone's has a solid history of grabbing good locations in the City by the Bay. Such was the case when it took over the former Grand Central Market (2435 California Street) in Pacific Heights and Tower Market (635 Portola Drive) in Twin Peaks a number of years ago. Both locations are "money" sites for a grocer that knows how to merchandise basic groceries side-by-side with quality fresh foods and specialty, organic and gourmet products, which just happens to be the essence of Mollie Stone's mission statement and positioning as a food retailer. 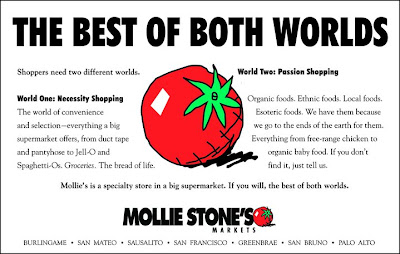 The buzz, after all, can drive shoppers to a new store - and that's very important. But once they get there, it's up to that fascinating recipe that makes food retailing so interesting, which consists of just the right combination of merchandising, pricing, location, store design and customer service, to get customers to return - and keep coming back.