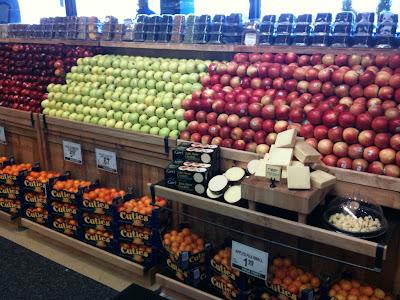 Above: A display in the produce department at the Mollie Stone's store in Greenbrae, California. The photograph was taken in December 2010, shortly after the store's produce department was remodeled. Notice the cross-merchandising of the gourmet cheeses and Carr's Table Water Crackers, plus the free cheese samples, in front of the apple display. Such suggestive selling-oriented cross merchandising is both creative, visually pleasing and smart. For example, it ups the odds an apple-buying customer will buy cheese and crackers, along with whatever else she buys during her shopping trip, astronomically. In addition, If she buys just one of the packages of the random weight gourmet cheese and a box of the crackers in the display, it could add anywhere from a minimum of about $5 -to- as much as $10 to her total market basket purchase at the store. And when it comes to average market basket, the more dollars the better for grocers. [Photo courtesy of: David Bennett/Mollie Stone's Markets.]

We can now report that Mill Valley-based (Marin County) Mollie Stone's Markets will be taking over the former Delano's IGA Market store, which is about 9,000 square-feet, on 18th Street, in San Francisco's Castro District.

Mollie Stone's plans to do some remodeling inside the Castro District store and have it open by March or April of this year, a senior employee at the eight-store privately-held chain told Fresh & Easy Buzz.

But the grocer also merchandises a full selection of everyday food and grocery items in its stores, including a selection of its own "Mollie Stone's" private brand, along with the Western Family brand, which is distributed by its wholesaler, Unified Grocers.

In fact, Mollie Stone's, which was founded by Mike Stone and David Bennett in 1985, plays up this dual specialty-mainstream merchandising philosophy by calling its stores, "The Best of Both Worlds," which is also Mollie Stone's marketing positioning and advertising tag line. Partners and majority-owners Stone and Bennett, who celebrated Mollie Stone's Markets' 25th birthday last year, still head-up the chain.

Mollie Stone's Markets' also puts an emphasis on customer service. For example, most of the grocer's stores have full-service, butcher shop-style meat and seafood counters, as well as self-service counters.

Additionally, the stores have service-delis, which feature an extensive offering of ready-to-eat and ready-to-heat fresh-prepared foods, plus lunch meats, cheeses and other deli items.

Most of the eight Mollie stone's stores also have in-store bakeries.

One unique feature the grocer has in two of its stores - the San Bruno and San Mateo markets - is "Mollieland," a professionally-supervised in-store child care and play area, where mom can leave the kids while she does her grocery shopping.

The Castro District location should a prime one for Mollie Stone's, as the neighborhood's demographics score very high for specialty/natural/organic, along with gourmet and prepared foods.

As we suggested in our November 30, 2010 piece linked at the top, the Castro District location would have been a good one for Tesco's Fresh & Easy (it's even better for Mollie Stone's though because it knows how to neighborhood merchandise in San Francisco), especially if it merchandised the store in a non-cookie cutter fashion, and while offering its basic selection of products, skewed the product mix high in the specialty, gourmet, natural-organic and fresh-prepared foods categories.

But the store in the prime Castro District location on 18th Street isn't in the cards for Fresh & Easy Neighborhood Market - or any other grocer. Instead, as we said in our November stories would likely be the case, it will soon be a Mollie Stone's Markets food and grocery store.

Mollie Stone's knows of what Fresh & Easy Buzz writes when we say the 18th Street location in the Castro District has huge potential, despite its mere 9,000 square-feet.

Mollie Stone's has a store of about the same size or even smaller, at 2435 California Street at Fillmore, in San Francisco's Pacific Heights neighborhood. The store, which for decades prior to becoming a Mollie Stone's a number of years ago, was the locally-famed Grand Central Market, owned and operated by Mike Stone's father-in-law.

The small-box store, then and now, has among the highest sales per-square-foot of any supermarket in the Bay Area. As Grand Central Market in the mid-1990's, for example, it was doing over $300,000 in weekly sales, according to a former major vendor who serves as a correspondent for Fresh & Easy Buzz in the Bay Area. We're told the now Mollie Stone's Grand Central Market does more than that amount weekly. The store's small parking lot is so busy during prime shopping hours, Mollie Stone's has one or two people directing in-and-out auto traffic in the lot for much of the day.

Mike Stone and David Bennett kept the Pacific Heights store's history alive when they took it over by naming it "Mollie Stone's Grand Central Market," rather than changing the name to "Mollie Stone's Markets," which all of their other stores are called.

Delano's IGA Markets closed and vacated the Castro District store on 18th Street in December 2010. The building's landlord is Kroger Co.'s Ralphs Supermarkets division, which for many years operated a Cala/Bell Market grocery store in the building.

In 2006, Kroger's Ralphs' division, which is based in Southern California, sold eight of its Cala Foods and Bell Market banner small supermarkets in San Francisco and Marin County to Harley Delano and his son Dennis. The eight stores formed the basis of the DeLano's IGA Markets' chain. Harley Delano was the president of Ralphs' Cala Foods/Bell Market division from 1990-1999.

The Delano's later closed two of the eight stores, bringing the total store count down to six.

In 2010 they opened up a store in Davis, California, Westlake IGA Market, which brought the total number of stores they owned and operated back up to seven. Davis is near Sacramento. Now there are just two markets owned by the Delano's.

The Davis store and a store in the Marin County city of Fairfax, Fairfax IGA Market, remain open because unlike the six that were closed late last year because of financial problems, the two stores are owned by the father and son team under a separate ownership structure. Also, unlike the six closed stores the Delano name isn't used on the Davis and Fairfax stores.

Don't be surprised if Mollie Stone's Markets grabs at least one of the remaining four former Delano IGA Markets stores, all of which have now been closed.