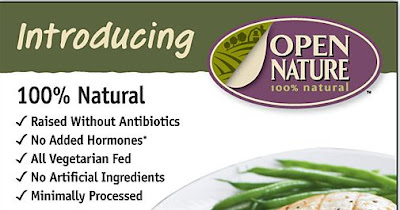 Safeway Stores, Inc. is rolling out a new natural foods private brand, 'Open Nature,' this week, starting with a variety of packaged products in the fresh poultry and meat categories.

The first 'Open Nature' brand items, which the grocer bills as "100% natural," are in the fresh poultry category, and include fresh boneless/skinless chicken breasts and a line of 12 ounce packages of chicken sausage, in a variety of flavor combinations.

Safeway Stores, Inc. was issued a U.S. trademark for 'Open Nature' - which as a non-organic natural foods brand fits in-between its popular 'O Organics' brand and its 'Eating Right' healthy foods' brand from a positioning standpoint - in June 2010, for use on products in the meats and processed food products; staple food products; and light beverage products segments, according to the filing with the federal trademark office.

Among the product categories included under the brand trademark include: soups; jams; jellies; potato-based and vegetable-based snack foods; and frozen entrees consisting primarily of meat, fish, poultry or vegetables, which means Safeway likely plans to extend the brand into categories beyond fresh meat and poultry.

The "100% natural" designation Safeway is using for 'Open Nature,' which is a brand claim used by numerous brand marketers and retailers, unlike the term "organic," which is regulated by the federal government, has no official or 100% agreed upon definition, although there's a consensus of sorts in the food industry as to what "natural" products should contain, nebulous as that definition may be.

Consumers though, with the exception of those very savvy in food product labeling and ingredient knowledge, have little concept as to what "natural" or "100% natural" means when they see it on a food label, which makes sense because as noted there's no officially regulated or objective definition as to what the attributes actually mean. It can be buyer beware.

Safeway, however, provides it own definition of "100% natural" on the labels of its new 'Open Nature' brand fresh poultry items. That definition includes the following attributes:

Let's take an evaluative look at each of the five brand product attributes as they pertain to the fresh boneless/skinless chicken breasts and the line of flavored chicken sausage.

This is a positive "natural" product attribute, since antibiotics are used in the raising of chickens by many farmers and processors. As such, it's an attribute that adds value.

The U.S. federal government doesn't allow hormones to be used in the raising of poultry or pork. Therefore, while this attribute might serve to communicate to consumers who aren't aware of this law that the chicken breasts and the chicken in the sausage line are free from hormones, we can't call it a positive brand attribute of 'Open Nature,' since it's merely a marketing message because federal law doesn't allow hormones to be used in raising poultry or pork in the first place.

To Safeway's credit, it puts an * at the end of this attribute, and offers a label note communicating that federal law prohibits the use of hormones in the raising of poultry and pork.

It's not clear by "all vegetarian fed" if Safeway means no grains of any type are fed to the chickens branded under the 'Open Nature' "100% natural brand."

Since grain is the primary feed for chickens, we doubt if the birds are vegan. Therefore, since vegetarian diets can also include grain, the attribute is positive only in so far as communicating to consumers that the birds aren't fed a diet that also includes meat-based feed.

There's some validity in this because some lower-end chicken is raised using various feeds, mixed with grains, that at times has been know to contain meat-by-products. But it's a fairly meaningless product attribute in our analysis.

This is a good attribute in that many chicken products are injected with water or a saline solution to plump the birds up. In fact, this is a major issue in the poultry industry.

For example, the California Poultry Industry Federation, which represents the majority of poultry companies based in California, has been trying to get the federal government to prohibit the use of the term "natural" on whole chickens, chicken parts like breasts, and value-added chicken products that have such added artificial ingredients.

The California companies don't inject water or saline solutions into their birds. However, most other states allow it. The "no artificial ingredients" attribute is also valid in the case of value-added items like the 'Open Nature' chicken sausage because some brands include artificial ingredients in the product.

This attribute has little meaning in our analysis. It suggests a semantic "naturalness" but in the case of fresh poultry and even the value-added chicken sausage line, one wouldn't expect the products to be highly-processed in the first place, would they?

Additionally, in terms of consumer information, there's really no definition of what "minimally processed" means. Rather, the definition is somewhat subjective, although a good rule of thumb, for example with chicken sausage, is that if the price of the product is extremely low, the product itself is most-likely more highly-processed than a more expensive product of the same kind. But even that rule of thumb is subjective.

Safeway's development of the 'Open Nature' natural foods brand, which in our analysis and opinion is an evocative and potentially strong brand name, is part of the retailer's strategy to appeal to and target what the Natural Marketing Institute (NMI) has identified as the LOHAS - (Lifestyles of Health and Sustainability) consumer.

These "ethical" shoppers, which the NMI says comprises about one-fifth of all U.S. consumers, have a high degree of concern about health and the environment, and the ways the two are related. It's a lifestyle attribute rather than a demographic metric, like income, education-level and so on, although various demographic attributes like "college educated" and "higher income" do tend to correlate highly with those identified as LOHAS consumers.

The grocer's 'O Organics' and 'Eating Right' food and grocery brands, along with its 'In-Kind' brand of health and body care products, which was introduced in late 2010, and now its 'Open Nature' natural foods brand, are all part of the portion of Safeway Stores' private brand portfolio that's driven by the LOHAS consumer segment.

In its private brand development and marketing department at corporate headquarters in Pleasanton, California, Safeway Stores' marketers and merchandisers working on the brands noted above talk often about appealing to what's also referred to as the "in me, on me, around me" consumer. These are folks, basically the same cohort as the LOHAS consumers, who care to a very significant degree about the types of foods they eat, the kinds of products they use on their bodies, the social and environmental issues surrounding how foods and non-food packaged goods are made, and how those combined factors or variables integrate with the communities they live in.

Safeway's fast-growing organic and locally-grown produce program, along with its across the board sustainability programs, are also targeted from a marketing positioning perspective to these LOHAS, "ethical" or "in me, on me, around me" consumers, who on a mass scale are the bread and butter customers of Whole Foods Market, Inc., for example.

As part of Safeway's LOHAS consumer-targeted private brand portfolio, brand 'Open Nature' fits a niche between 'O Organics' and 'Eating Right.' 'O' Organics hits both the organic and natural attributes; 'Eating Right' the healthy foods' hot button and; by virtue of that attribute also the natural foods hot button in most cases. 'Open Nature' focuses on the natural-foods-but-not-organic segment, which allows for a lower price point than the 'O Organics' brand items but still appeals to many aspects of the LOHAS consumer's values.

For example, Safeway currently has the 'Open Nature' "100% natural" boneless/skinless chicken breasts on promotion in its western U.S. stores, for $4.49 per pound. In contrast, when it runs its 'O Organics' organic boneless/skinless chicken breasts on ad, the promotional price-point is usually $5.99 pound, at the lowest end. Not all of the LOHAS-typed consumers can afford to pay $5.99 a pound for organic chicken breasts. But perhaps many of them can afford to pay $4.49 for the 'Open Source' "100% natural" version, trading off the organic attribute for the price savings, while still satisfying many of their values and needs.

Expect to see Safeway roll-out additional 'Open Nature' brand items, first in the fresh poultry and meat categories, but also in other product categories, throughout 2011.

Also expect to see the grocer add numerous new items to its other LOHAS consumer-focused brands - 'O Organics,' which with sales of over a $1 billion annually is the highest-grossing organic foods brand in the U.S., 'Eating Right,' and 'In-Kind' - throughout this year.

Thank you for your great article. Can you shed some light for me on what this meant:

"Since grain is the primary feed for chickens, we doubt if the birds are vegan."

The writer is attempting to point out the irony of using "all vegetarian grain" as a promotional element since it's feed for an animal, the by-product of which - the chicken - is meat.

Also, on a non-ironic note, it's not alays easy to determine that grain used to feed chickens doesn't have any traces of animal by-products in it.

Since the Open Nature birds aren't certified organic, and Safeway doesn't say it has the grain the farmers it buys the chickens from independently tested, it might be better not to use that claim.

For example, without regular, independent testing of the grain thes farmers use, how does Safeway know what is being used is 100% "vegetarian grain." The term also sounds a bit silly and meaningless.

My MAIN Question is : are the chickens and other animals free roaming and cage free--this was not addressed at all!! This is a VERY Important issue to me!!

As far as we're aware, the chickens aren't free-range. But you can check with Safeway Stores, Inc. and see what they say.