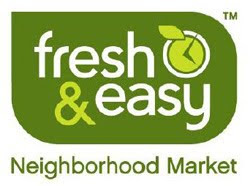 We don't have all the details on the new format as of yet.

However, based on what we've learned so far, the smaller format is essentially an edited version of the existing Fresh & Easy format.

Further, we're told both urban and suburban retail store sites are being looked at by Tesco's Fresh & Easy for the new, smaller stores, which could have the "Express" name attached top them.

For example, among the current potential smaller store sites the fresh food and grocery chain is looking at include at least three locations in Orange County, along with more than one site in Los Angeles and nearby Santa Monica.

According to our sources, one of the reasons Tesco's Fresh & Easy is considering opening the smaller stores is because Tesco's business model has restrictions on the amount of capital used to purchase and lease store locations. This is one reason, for example, there aren't 10,000 square-foot -to- 12,000 square-foot Fresh & Easy stores in Southern California cities like Santa Monica or regions like West Los Angeles, which have among the highest retail commercial real estate costs in Southern California.

In contrast, according to our sources, by being able to build or lease locations in the 4,000 square-foot -to- 5,000 square-foot range, Fresh & Easy Neighborhood Market can get into these desirable cities and neighborhoods because the rental and purchase costs for stores half the size of the existing Fresh & Easy markets in places like Santa Monica and West L.A., and elsewhere where retail real estate costs are similar, generally fit into the business model Tesco has set for Fresh & Easy when it comes to the amount of capital available for buying and leasing store locations.

Tesco's Fresh & Easy Neighborhood Market has been working for some time to come up with a way to adapt the current product offering (about 4,500-5,000 SKUs) in the 10,000 square-foot -to- 12,000 square-foot Fresh & Easy markets to a smaller format store, such as those we're reporting on in this piece, according to a source in a position to know such information.

Fresh & Easy Neighborhood Market could easily fit the same number of SKUs it currently offers in the 10,000 square-foot -to- 12,000 square-foot stores in the 4,000-5,000 square-foot units simply by narrowing the store aisles, using higher shelving, and reducing the amount of product facings it gives each item in the store. Sources tell us though that the smaller stores will offer a limited assortment of the current Fresh & Easy store mix rather than doing what we describe above.

The primary but not only reason Fresh & Easy Neighborhood Market has developed the smaller store format is because it wants to create more flexibility within Tesco's property capital allocation model, described earlier, which will then allow Fresh & Easy to open stores in these desired but so far unobtainable locations and still be within its property budget.

What about the great space that is still empty at Sylvan Square in Modesto? This shopping center gets a lot of traffic because of the other successful tenants. Is this location still being considered?

A Fresh & Easy Neighborhood Market spokesperson said a few months ago that Sylvan Square and Crows Landing Road are still future Fresh & Easy store sites. Based on our information from other sources as well, we think that's still the case.

The reader also told us construction dividing the old supermarket building in half stopped. What are you seeing?

The space was split in two parts and the half that I assume was to be Fresh & Easy hasn't had any activity that I've noticed for some time. I don't think it has a For Lease sign now, and I hope that means that Fresh & Easy still has the space. The other half is now a medical office. The only other available space in the whole center is a small storage space behind one of the restaurants, or so it appears.

Based on the info we have, do believe the space you are talking about is where the Fresh & Easy store is supposed to go. And therefore tracks why there is no for lease sign on it. As mentioned, it is still a future store location, based on what we know as of today.

Would you drop us an e-mail to freshneasybuzz@yahoo.com, as would like to share something with you and ask a question.

A few Bay Area papers are reporting on Fresh & Easy's smaller store plans today. To bad they didn't give you guys the credit. Good scoop!

As you've correctly pointed out in the blog, many of the Fresh & Easy stores are doing under $100k a week in sales. More than a few are still doing $50k-$70k.

Finding locations half the size of the current stores looks to me like a way to grab sales per sq. ft. without increasing actual sales. If they can do $60-$100k sales in 5k sq. rather than the current 10k sq. ft. ft. for example that might be profitable.

As you know, the economics of 5k sq. boxes aren't any easier than 10k boxes though.