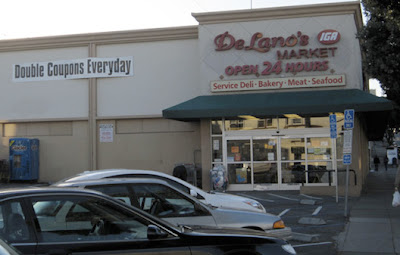 The reports, which aren't news to us here at Fresh & Easy Buzz, track with what we know - which is that Tesco's Fresh & Easy has agreed in principal with the now vacant building's landlord on a lease, and is in the process of finalizing its terms.

Another reason today's reports don't come as news to us is because we suggested in a story back on November 30, 2010 that Fresh & Easy Neighborhood Market should take a close look at the Mission District DeLano's IGA Market store, along with four others, as part of our reporting on the grocer's troubles, which led to its closing five of its seven supermarkets late last year. [See - November 30, 2010: DeLano's IGA Markets Closing Five Stores in San Francisco & Marin County; Fairfax, Davis Units to Remain Open (For Now).

The locations of the five DeLano's markets referred to in our November 30, 2010 story linked above are:

Below (in italics) is what we said in the last half of the November 30, 2010 piece linked above:

"One of the stores that Tesco's Fresh & Easy Neighborhood Market plans to open early next year in Northern California is not far from the Outer Richmond District DeLano's IGA Market unit, at 6333 Geary Boulevard, that will soon be closed. The Fresh & Easy store, which is at 32nd Avenue & Clement Street in the Outer Richmond, should benefit from the closing of the DeLano's market because there isn't another grocery store in the immediate portion of the neighborhood.

Tesco's Fresh & Easy would be wise to take a serious look at all five of the closing DeLano's IGA Markets stores, particularly the two units in Marin County (Mill Valley and Tiburon), where Fresh & Easy Neighborhood Market doesn't currently have any planned locations.

The 18th Street store in San Francisco's Castro District, which is a space of no more than 10,000 square-feet, is also a location Tesco's Fresh & Easy should look very closely at trying to acquire. We suspect a number of grocers will be looking at the location.

The Castro District ranks high for sales of natural, organic, fresh-prepared and specialty foods, for example. Both Whole Foods Market and Trader Joe's have plans to open stores in the Castro in 2011. Whole Foods' approval looks solid. Trader Joe's is having some problems in terms of getting its store site in the neighborhood approved.

The other two closing DeLano's stores, the Geary Boulevard unit in San Francisco's Outer Richmond District mentioned previously and the Mission District store on South Van Ness, offer less potential for Fresh & Easy in our analysis, although we would take a close look at both, just not as close as the others.

The Geary Boulevard DeLano's IGA Market location in San Francisco's Outer Richmond District is likely too close in proximity to the 32nd Avenue & Clement Street Fresh & Easy store opening early next year for both stores to do well, in our analysis. One store would probably cannibalize sales of the other, which is something that's been happening with some of the Fresh & Easy stores that are located too close to each other in Southern California, Arizona and Nevada.

The Mission District DeLano's store offers some potential for Tesco's Fresh & Easy. However, based on a number of factors, it's our analysis the location would be a real uphill struggle for the Fresh & Easy format."

Not long after we published the November 30, 2010 piece, commercial real estate sources told us representatives of Tesco's Fresh & Easy Neighborhood Market were inquiring about leasing the vacant building for a Fresh & Easy store. The grocer's talks with the vacant building's landlord, Joanne Wong-Lam, have progressed since then.

A Tesco source has also confirmed the existence of the talks for Fresh & Easy Buzz.

Exterior construction on the 5800 Third Street unit is complete. Work on the store's interior is progressing. Renovation work on the 32nd and Clement store, a vacant former Albertson's supermarket, which Fresh & Easy originally said would open in the first quarter of 2011 but has since postponed, is just getting started. The 32nd & Clement Fresh & Easy store will be side-by-side with a CVS drug store. [For a look at the floor plan see - June 26, 2010: Tesco Planning to Announce in July When First Northern California Fresh & Easy Neighborhood Market Stores to Open.]

No work has yet started on the vacant building at Silver Avenue & Goettingen that Tesco's Fresh & Easy acquired in early 2008. The building was formerly a Cala Foods/Bell Market supermarket. Meanwhile, despite our November 30, 2010 analysis that the Mission District location at 1245 South Van Ness would be an uphill struggle for the Fresh & Easy format, the Tesco-owned fresh food and grocery chain looks like its preparing to lease the site and give it a go. (Of course, nearly everything in San Francisco is an uphill struggle from a topographic point of view. But we did mean the term figuratively, as well as literally.)

As we said back in November of last year, the location does in our analysis offer potential for Tesco's Fresh & Easy Neighborhood Market. But of course, the devil is in the details. InSpecifically, such potential can only be fully-realized if the grocer makes sure the store and its product merchandise mix is tailored to the neighborhood's demographics, which includes a combination of lower-income Hispanic residents, lower-to-middle-income whites, and a significant percentage of younger, single residents who don't have a lot of disposable income, along with a small but growing professional class.

Such neighborhood-oriented merchandising isn't something United Kingdom-based Tesco's Fresh & Easy Neighborhood Market USA does though. Instead, for example, it essentially offers the same product mix at it stores in lower-income and primarily African American and Latino South Los Angeles and Compton, as it does at the Fresh & Easy markets in middle-to-upper income and majority white Orange County and suburban Phoenix, Arizona.

Perhaps Northern California - a fresh, new market region for the grocer - would be a good place for Tesco's Fresh & Easy to start doing a little bit of neighborhood or micro-merchandising. If it were to do so, particularly in San Francisco, it's sales and profits at those stores would be much higher and better that they will be without taking such an approach. This includes the potential future Fresh & Easy stores at 1245 South Van Ness, in the city's Mission District.

DeLano's IGA, which closed its store at 1245 South Van Ness in December 2010, wasn't the first - and won't be the last - food retailer to operate a grocery store in the now vacant building in San Francisco's Mission District.

>In 1963 the Purity Stores supermarket chain, once a powerhouse in California but now gone, acquired the Siris chain, which included the store at 1245 South Van Ness. The store then became a Purity market. 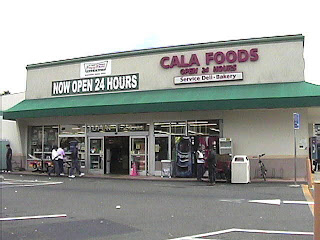 Pictured above is the Cala Foods store at 1245 South Van Ness, as it looked during its about three decades in operation, from the mid-1970's-to-mid-2000's.

>The now vacant building at 1245 South Van Ness in San Francisco's Mission District would remain a Cala Foods market until 2006, when Kroger Co. sold it, along with seven other stores, to Harley DeLano and his son Dennis. Harley DeLano was the President of Cala/Bell throughout the 1990's. The store and the others formed the basis of DeLano's IGA Markets. The DeLano's now own just two stores, one in Marin County and another in Davis, near Sacramento.

>From 2006 to December 2010, when the DeLano's closed the Mission District store and four others in San Francisco and Marin County, the now vacant grocery store at 1245 Van Ness flew the Delano's IGA Market banner.

I finally visited one of these Fresh and Easy's, in Pacifica. I live 2 blocks from South Van Ness and 24th so PLEASE MAKE THIS HAPPEN!!