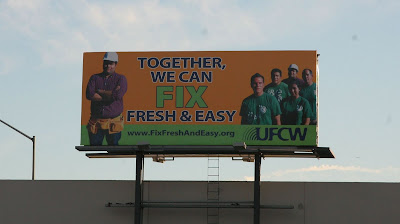 The billboard pictured above is on the 405-Freeway in Southern California.

Additionally, the union has launched a new video on its YouTube channel, which is tied-in to the advertising campaign.

In a story on December 20, 2010 - UFCW Union Launches New 'Fix Fresh & Easy' Neighborhood Market Website and Social Media-Based Campaign - we reported that the UFCW union was launching its "Fix Fresh & Easy" Neighborhood Market campaign, which is a multi-media-based effort to draw attention to what the grocery clerks' union says are numerous problems at the Tesco-owned, El Segundo, California-based fresh food and grocery chain, which has had operating losses of over $500 million so far since the first Fresh & Easy markets opened in November 2007.

"Fix Fresh & Easy" is the latest effort by the UFCW to unionize store-level employees at United Kingdom-based Tesco's 156 Fresh & Easy markets in California, southern Nevada and metro Phoenix, Arizona, something the union, which represents about 1.5 million retail grocery clerks and workers in allied industries in the U.S., Canada and Puerto Rico, has been attempting to do beginning before the first stores opened in late 2007.

It's also a new tact for the UFCW union, in that "Fix Fresh & Easy" takes a "consultative" approach, pointing out what the union and some Fresh & Easy Neighborhood Market store workers say are problems with how the chain is operated, then offering various solutions (fixes) to those problems, often times using employees of the chain to deliver those messages via various forms of media.

The UFCW union has kicked-off the new outdoor advertising element of its "Fix Fresh & Easy campaign with a billboard (pictured at top), which is located on the busy 405-Freeway (southbound near Century Boulevard) in Southern California. The billboard is not only located in a spot that has some of the highest commuter traffic counts in Southern California, its also in a place that's nearby a number of Tesco's Fresh & Easy stores in the region.

The 405-Freeway location is the first billboard in the union's outdoor advertising campaign, and currently the only one. However, a spokesman for the UFCW union tells Fresh & Easy Buzz that additional billboards like the one pictured at top are planned for Southern California, and possibly Arizona and Nevada.

The UFCW spokesman says the theme of the billboard is designed to tie-in with the union's social media-based efforts, in which it's offering ways to "Fix Fresh & Easy," the leading suggestion being for the chain to sit down with representatives of the UFCW to discuss unionizing Fresh & Easy Neighborhood Market store-level employees.

The UFCW union has also launched a new video (see below) on YouTube, tied-in to the outdoor and Facebook advertising campaign. The less than two minute video, "Fresh & Easy Customers Speak Out," features "The Repairman." along with interviews with various Fresh & Easy store customers, discussing whether or not they will continue shopping at Fresh & Easy Neighborhood Market in light of the unionization issue.

We asked the spokesman for the grocery clerks union to verify for Fresh & Easy Buzz that the people in the video are actual Fresh & Easy store customers. Here's what he said: "The people are real customers from [Fresh & Easy] stores across LA. They chose not to shop after being given a flyer, and then were approached and offered the opportunity to appear in the film."

In addition to launching the outdoor advertising campaign with its first billboard on the 405-Freeway in Southern California, the UFCW union is also running two different ads on Facebook, as part of the popular social media site's targeted, paid advertising program.

The Facebook site ads are being run on a targeted, rotational basis to selected Facebook users, including Fresh & Easy Neighborhood Market employees and customers in California, Nevada and Arizona, according to the union. (See the screenshots of the Facebook advertisements pictured above and below.)

The UFCW union spokesperson says additional advertisements are being prepared to be run on Facebook as part of the campaign, adding the two current ads being started off on a "heavy" rotation," meaning they will show up frequently on the Facebook pages of the various targeted users.

Additionally, as we've been reporting in Fresh & Easy Buzz since 2009, the UFCW union locals in Northern California are preparing a local campaign of their own, targeted to when Tesco opens its first Fresh & Easy stores in San Jose and Danville (San Francisco Bay Area) on March 2, followed by the openings of nine other stores between March 9 and the end of April.

Although not yet announced by the grocer, two stores in San Francisco, in the Richmond and Bayview neighborhoods, are set to open in April or May, according to our sources, although those dates could change depending on if the stores are ready to open by then. [You can see the opening dates and locations of the 11 Northern California Fresh & Easy stores here.]

Meanwhile, Tesco corporate director and Fresh & Easy Neighborhood Market CEO Tim Mason has been using what you might call, borrowing from the world of diplomacy, a "soft power" approach, along with other efforts, to suggest to Fresh & Easy store employees that joining the UFCW union is not in their best interests. The program sends "Fresh & Easy Ambassadors" to the stores to talk with employees about the advantages of keeping Fresh & Easy Neighborhood Market non-union. The "Ambassadors" aren't supposed to tell store workers not to organize a union, or that if they do so they will be looked on in a less than favorable light by senior management. Rather, their role is designed as a consultative or persuasive one, hence the "soft power" analogy.

Periodically CEO Mason has read reports prepared by the "Fresh & Easy Ambassadors" to corporate headquarters employees during meetings, according to sources who've been at the meetings, and has indicated he thinks the approach is working well as part of the chain's efforts to remain non-union, according to those sources.