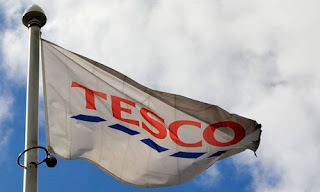 The changing of the guard at Tesco plc

Incoming CEO Philip Clarke has named - and enlarged - the members of his executive committee, which will assist him and United Kingdom-headquartered Tesco's board in making policy when he takes over for retiring Terry Leahy on March 1 of this year.

Tesco is the parnet company of El Segundo, California-based Fresh & Easy Neighborhood Market, which currently has 156 fresh food and grocery stores in California, Nevada and Arizona.

In addition to the current seven members of the executive committee under CEO Leahy, who are all members of Tesco's board, Clarke has named seven new members, all Tesco executives, to the committee, which functions to run the company just below the Tesco plc board level.

Below are the new members of the executive committee, named today by incoming Tesco CEO and current director of European operations and corporate information technology Clarke:

Gordon Fryett, Alison Horner, Trevor Masters and Mike McNamara will report directly to Philip Clarke, according to a corporate spokesperson. Bob Robbins and Laura Wade-Gery, whose responsibilities are in the UK, will report to Richard Brasher; and Ken Towle, who will operate within the services area, will report to Andrew Higginson, Tesco said today.

Additionally, the spokesman says Tesco will shortly be appointing a group commercial director, who is also expected to join the executive committee.

The seven new members (plus the eighth to be named later) join the seven Tesco board members listed below to comprise Philip Clarke's executive committee:

Tim Mason, who's currently the CEO Tesco's El Segundo, California-based Fresh & Easy Neighborhood Market and a member of Tesco's board, gets the added title of Tesco deputy CEO, as noted above, on March 1, when Philip Clarke replaces Terry Leahy as CEO at global headquarters in Cheshunt, UK.

Mason will remain in Southern California at Fresh & Easy's headquarters. Running the 156-store fresh food and grocery chain will remain his main job function. However he will take on some added Tesco corporate responsibilities, to include marketing and branding, along with the company's global climate change initiatives, which have been the pet project of CEO Leahy over the last few years.

"I am delighted that I have been able to bring together such a strong team which possesses the right blend of talent and experience needed to drive the company forward and take it to a new level," Incoming CEO Clarke said today, announcing his expanded executive committee. "This is a formidable group of people with an enviable range of talents gleaned over many years in Tesco and other organisations, both in the UK and overseas."

Meanwhile, retiring CEO Sir Terry Leahy is attending the World Economic Summit in Davos, Switzerland, where he's participating in a panel discussion, along with other global business and government leaders, focusing on climate change and carbon reduction issues and strategies.

As noted above - the climate change issue is one that's very important to Leahy, both as CEO of Tesco, which is nearly at the end of its 14-year run, and personally. Expect him to continue working on it at some level after his retirement from Tesco on the last day of February 2011.
Posted by Fresh & Easy Buzz at 6:56 PM