Sunday Satire By Earl Grey: Soon to Be 'Ex-Governator' of California and Tesco's Fresh & Easy - A Match Made in Heaven? 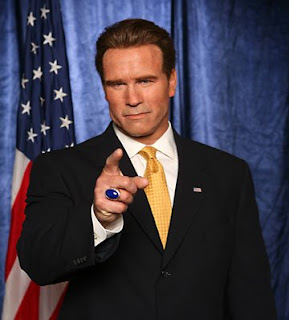 I have just two words - actually it's a famous name - for United Kingdom-based Tesco when it comes to promoting its Fresh & Easy food shops in California and nearby Nevada and Arizona: Arnold Schwarzenegger.

That's right, starting tomorrow the Austria-born body-builder, who then became a famous movie actor and celebrity, a position he used to become the two-term-Governor of California, is out of a job, replaced by another once two-term Governor, Jerry Brown.

And the change is just in time for Arnold - and the state - by the looks of California's poor economy, its high unemployment rate of over 12%, and its twenty-some billion dollar budget deficit. Some of the more optimistic residents around my new part-time residence in the Golden State say prosperity is just around the corner. But right now it's still looking and feeling to me a bit like the United Kingdom economically rather than like a place that's on the verge of entering a brave new economic world, at least in my neck of the woods, which I confess isn't Beverly Hills.

During his eight years in office, Governor Schwarzenegger took no salary, instead living off the tens of millions - and some say hundreds of millions - he made in Hollywood. He also paid for the cost, estimated to be about $6,000 a minute, it takes to fly his private jet back and forth from his home in Southern California to the state capital in Sacramento; doing so multiple times per week.

One thing is certain, you can say whatever you want about Arnold's performance running California - and much is being said about it - but what you can't say is that he made any money out of it. And, as a result of this fact, he needs a gig - and fast - in order to replenish the millions he spent out-of-pocket to support himself and his family in high style while serving as Governor of California for the last eight years. Not that he's hurting. But running California for eight years has been a personal money-loser for a man who's made a lot of it at everything he did before getting into politics.

A match made in Heaven?

Tesco, which has its Fresh & Easy food and grocery chain based in Southern California where it has about 106 of its 155 grocery markets, needs a hook to lure shoppers into its food shops. The soon to be former Governor of California needs a new gig. Therefore, I see a match made in Heaven.

The one thing Arnold has always been the best at - as a body builder, actor, businessman and Governor - is promotion, which from the looks of it is something Tesco needs a lot of for Fresh & Easy. And, even though his popularity rating as Governor haven't been too grand over the last year, once he's out of office, the great residents of the Golden State will take to loving Arnold in huge numbers once again, just like they did before he set foot in Sacramento.

It's just the way Americans treat their ex-politicians. Look at Bill Clinton, who was nearly impeached as President. Now he's a rock star. And even George W. Bush, who in his last term as President had an approval rating of about 22 percent, as low as it gets. Thanks to not speaking out in public much for nearly two years, plus a new book, "Bush 43," as they call him, is back in the high fifties and on his way to being thought of highly by 60% or so of the American public, after less than two years out of office. Were less kind in Britain. Just ask Gordon Brown.

It won't take the soon to be former Governor of California nearly that long to once again become a matinee idol - he too good at self promotion to let that happen. He's also not George W. Bush. Actually, he's more of a Bill Clinton in personality. Instead, mere months after Arnold leaves office, look for the "Terminator," who road into office eight years ago as part of the recall of then-Governor Grey Davis, to once again become the popular Californian he was before becoming Governor.

Tesco should take note of what I say. Sign Arnold up as the Fresh & Easy Neighborhood Market spokesman and pitch man before Walmart or Safeway get wind of my idea. He's a far better fit for Tesco's small food stores than he is for Walmart's mega-supercenters or Safeway's big supermarkets anyway. Arnold Schwarzenegger: A big man for a chain of small grocery stores.

I can see the once 'Governator' touting Fresh & Easy, beginning almost immediately.

For example, how about a television commercial where Arnold stands outside a small Fresh & Easy market, his big arms made to look like they're holding the store in them, and says: "I'm Arnold Schwarzenegger - and I'm here to 'Pump Up' Fresh & Easy?" His Austrian accent would also be a nice contrast to the British accent Tesco offers with its Fresh & Easy stores.

The promotional opportunities are unlimited. How about a line of "Arnold" brand energy bars (with his mug on the label), energy drinks, smoothies and other health and fitness related products exclusive to Fresh & Easy - and promoted by the man behind the private brand, Arnold Schwarzenegger. Talk about a "point-of-difference," as the grocery industry and brand management types like to call it.

Then there's product placement promotion. It's possible Arnold will star in another "Terminator" movie. Remember, he said he would be back. Also remember he needs to replenish his bank account after eight years in office. With Arnold as the spokesman for Tesco's Fresh & Easy, it would be a given that one or more of the little Fresh & Easy markets would make an appearance in what would be a huge box office blockbuster. Perhaps the script of the movie could even be written in a way that makes Fresh & Easy a hero in the film? Tens of millions of viewers. Positive placement. All because of Arnold.

It's all about what I like to call the "Arnold all over" campaign - on billboards, on the radio for Fresh & Easy, "guest-tweet" appearances on the Fresh & Easy Neighborhood Market Twitter feed, store visits - and on-and-on. If the message is truly the medium, then Arnold would be the message for Fresh & Easy. All Arnold, all the time. Done with taste of course.
Even if Tesco seizes the opportunity I've laid out for it, Arnold will still have to say yes to becoming the chief spokesman and pitchman for Fresh & Easy. And you can bet the offers have already started rolling in for the man spending his last night as the chief executive of the nation state of California, home to nearly 40 million people and the sixth-largest per-capita economy in the world, nearly as big as that of the entire United Kingdom.

My suggestion: Bring in the man with stature and the charm, Tesco CEO Sir Terry Leahy, who's retiring as Tesco's chief executive in March of this year.

Fresh & Easy is Sir Terry's baby. He launched it in 2006 but isn't going to see it become profitable during his tenure, if ever. But Sir Terry, who's the rock star of retail in Britain, and a man who can talk chief executive-to-chief executive with Arnold, as well as respective rock star-to-rock star, could seal the deal, without question. It would be Sir Terry's last big hurrah. And perhaps the best parting chance he has to help Fresh & Easy succeed in America.

It's pure magic, I tell you. Arnold Schwarzenegger, the Austrian immigrant, who has come to symbolize the American Dream, teamed up with the huge British retailer, Tesco, that wants a piece of the American Dream with its Fresh & Easy Neighborhood Market grocery chain. The big guy - Arnold - embracing the little Fresh & Easy markets against a world, or at least a California, Nevada and Arizona, of huge hypermarkets and supermarkets.

[Editor's Note: After a long but undeserved hiatus, our sometime satire and humor columnist, Earl Grey, has favored Fresh & Easy Buzz with a new submission to start off 2011. In a long e-mail explaining his hiatus, Earl, who over the past few years has divided his time between a flat in London and a home in Lake Havasu City, Arizona, where the original London Bridge was moved many years ago to serve as a tourist attraction, informs us that among other things, he' sold his winter home in Lake Havasu City in a "short sale" and has now bought a small winter home in California, which he says he got for a "steal" in a foreclosure sale. Since it's the start of a new year and his column topic is well-timed, even though it's been nearly a year since we've had a submission from Earl, we've decided to forgive him for his long absence, restore his byline on probationary status, and run his contribution. Note: The column is satire, or an attempt at it.]

A couple past columns by Earl Grey