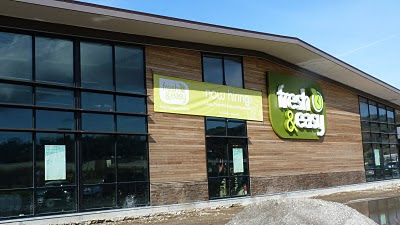 The Fresh & Easy store building at Cabrillo Highway and Linda Mar Boulevard in Pacifica, California (pictured above) has been completed for over two years. But the wood siding and signs were recently added by construction workers. The store's exterior has been completed, and workers have started getting the inside of the store ready for its March 9, 2011 opening. (The photo was taken by a Fresh & Easy Buzz correspondent on December 27, 2011.) See - December 27, 2010: First Look at the Pacifica, California Fresh & Easy Neighborhood Market Store, One of the First Opening in Northern California in Early 2011.

The first two Fresh & Easy stores are set to open on March 2, 2011. The remaining nine stores will open throughout March and into late April 2011.

Below are the 11 Northern California Fresh & Easy store locations and the opening dates: 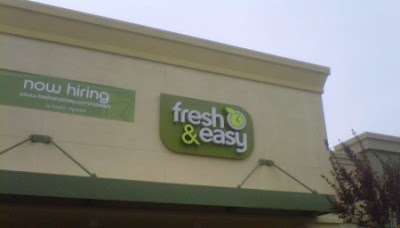 Work on the exterior of the Fresh & Easy store at Clayton Road and Ygnacio Valley Road in Concord, California (pictured above), which is set to open March 16, is nearly completed, as of this week.

In addition to the 11 stores opening between March and April of this year, Tesco corporate director and Fresh & Easy Neighborhood Market's CEO Tim Mason said today the grocer will be announcing the opening dates for two Fresh & Easy markets in San Francisco in the "coming weeks." The two stores are located at 32nd Ave. and Clement St. in the city's Richmond District, and Third St. & Carroll Ave., in San Francisco's Bayview District.

Fresh & Easy Buzz has reported since early 2010 that Tesco's Fresh & Easy Neighborhood Market would start opening its first batch of stores in Northern California in March 2011. The announcement by the retailer today confirms our extensive reporting.