Walgreen Co. is - as of Friday, April 9 - officially the owner of New York's Duane Reade drug store chain, which with 258 stores in the New York City metro area is the number one drug channel retailer in the market.

That's a big bite out of the drug (and food and grocery) retailing apple for the drug chain in the "Big Apple."
Walgreens says it plans to operate the stores under the Duane Reade banner (perhaps not forever), which is a wise move considering the strong equity the name has in New York City. It's CEO, John Lederer, also is staying on for now.
Walgreen Co. has 70 drug stores under the Walgreens banner in New York City. The acquisition of the 258 Duane Reade units brings its total store count 328 in New York City, which makes it fae and away the leading drug chain in the region.
There are nearly 7,500 Walgreens stores in the U.S. The retailer had 2009 annual sales of $63 billion. Duane Reade had 2009 sales of about $1 billion.
Ownership of Duane Reade makes the drug retailer's plans to get into the fresh, prepared foods merchandising and retailing business much, much easier than it was just a mere two months ago, when the leading U.S. drug store retailer announced its intent to buy New York City's 50 year old iconic drug chain for $618 million and the assumption of its debt in a friendly acquisition.
Walgreen Co. had announced its plans to develop a fresh, prepared foods program just a few weeks prior to its February 17, 2010 Duane Reade acquisition announcement, by the way.
Fresh & Easy Buzz first reported on Walgreens' plans to get into fresh, prepared foods retailing in January of this year.
We were the first publication to report that Walgreen Co. had hired former Tesco Fresh & Easy Neighborhood Market director of fresh foods Jim Jensen to head the start up of its fresh, prepared foods program, something the drug chain confirmed shortly thereafter. [January 6, 2010 Breaking Buzz: Corporate Director of Fresh Foods Jim Jensen Leaves Tesco's Fresh & Easy.] [January 15, 2010: Just-Exited Tesco Fresh & Easy Fresh Foods Director Jim Jensen to Head New Fresh Foods Initiative at Walgreens Drug Chain.]
The reason Walgreens' development of its fresh, prepared foods program, which according to our sources is coming along nicely, just got easier for the chain is because Duane Reade has an impressive fresh, prepared foods program operating in some of its newest and most-recently remodeled stores in New York City, including its newest store on 8th Avenue (between 16th & 17th) in Manhattan's Chelsea district, and the location at 1350 Broadway (at 35th Street) in Manhattan, both of which we've visited. 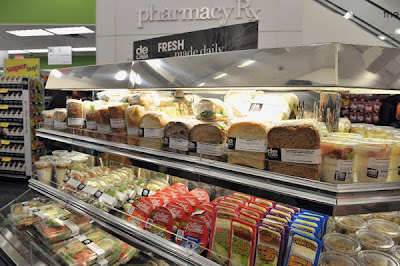 The primary focus of Duane Reade's fresh, prepared foods merchandising is on offering an selection of packaged, ready-to-eat and ready-to-heat fresh, grab-and-go type foods under its own "deLish" private brand, merchandised in attractive and convenient refrigerated cases, like those pictured above and below. The ready-to-eat foods include sandwiches made by New York City prepared foods guru Eli Zabar (also pictured below), salads, ready meals, side dishes, snacks, desserts and more for all three meal occasions: breakfast, lunch and dinner. 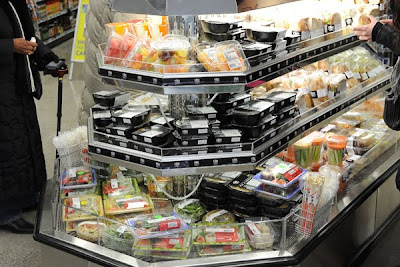 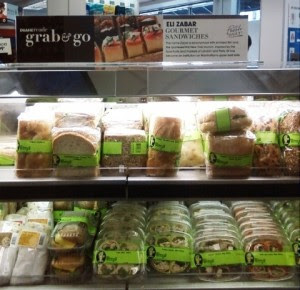 The stores also feature a selection of fresh breads and baked goods merchandised in clear plastic display fixtures (pictured below). 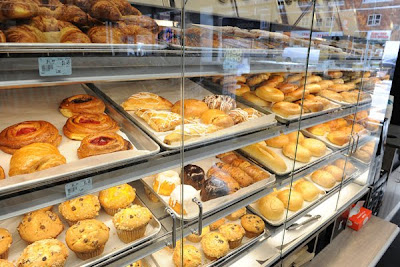 All of its fresh, prepared foods items are made for and distributed to Duane Reade by local food vendors (like Eli Zabar) on a daily basis.

There's also a selection of manufacturer branded refrigerated fresh foods, along with a huge assortment of chilled beverages, in the stores' "grab-and-go" fresh foods area. Each store also has a fresh-brewed coffee station, like the one pictured below. Duane Reade's is a full-blown fresh, prepared foods program, not a mere hobby. 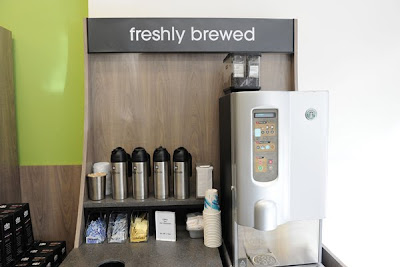 The stores look more like mini-supermarkets than they do traditional drug stores. (See below.) Think "channel bending" - one part small-format food store and one part convenience store, combined with a full drug store and pharmacy, with a fresh, prepared foods cherry on top. About all that's missing are fresh produce and traditional fresh meats. There are some convenience-type meats in the stores. 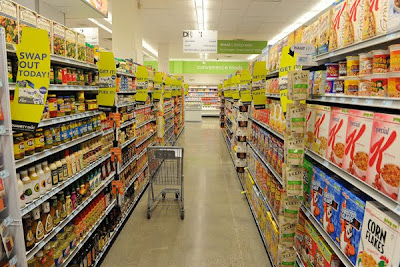 These newer and more-recently remodeled Duane Reade stores also feature an extensive selection of packaged foods, groceries, perishables and non-foods - which the chain has been adding in nearly all of its stores in various degrees depending on the available square footage of each respective store.

The key feature in these above product categories are Duane Reade's various food (and beverage) and non food private brands, which in our analysis and opinion are some of the best looking (design) and better quality store brands produced by retailers of any channel we've come across in recent times.
Duane Reade's fresh, prepared foods have been well-received in the New York City stores where they're currently being merchandised and sold. So much so in fact that including the category in its new and remodeled stores has been top priority for Duane Reade, which is something we're told will continue to be the case under Walgreens' ownership. 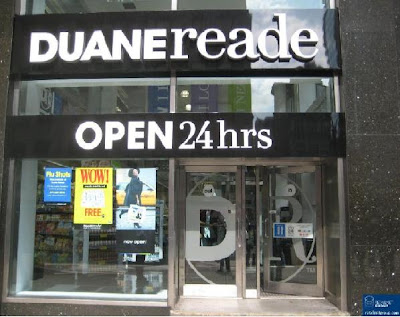 In fact, according to our sources, Walgreen Co. plans to speed up the process of putting fresh, prepared foods in the Duane Reade stores. It also plans to use the Duane Reade program as the blueprint for testing the sales of the ready-to-eat and ready-to-heat foods in some of its existing 70 Walgreens banner stores in New York City, starting fairly soon.

And of course, in terms of blueprints, the Duane Reade program is invaluable to the work ex-Tesco Fresh & Easy fresh foods director Jim Jensen and others are and have been doing for the last couple months in getting Walgreens' Fresh, prepared foods program developed.
New York City also happens to fit in very well with the drug chain's strategy for its fresh, prepared foods program, which puts an emphasis - but not exclusively by any means - on highly dense market regions like Manhattan, along with markets like Boston, Philadelphia, Chicago, San Francisco and others.
As we discussed in this January 2010 piece [Walgreens Eyeing San Francisco For Fresh Foods Program: Could it Strike Category Gold in the City By the Bay?] dense urban regions like New York City and San Francisco lend themselves well to grab-and-go and other forms of fresh, prepared foods merchandising and sales. 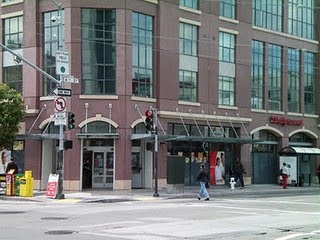 Walgreen Co. has lots of stores in both these cities (328 in New York City, population 13 million) and 64 in San Francisco, population 900,000) resulting in what in our analysis is an excellent formula for fresh, prepared foods retailing. That formula: Dense urban markets/ lots of people on the ground x having a high store count in such markets = a good grab-and-go prepared foods market. (The Walgreens store above is in San Francisco's South of Market neighborhood)

When it comes to fresh, prepared foods, Duane Reade gives Walgreen Co. not only the leading drug category market share in the number one urban market in the U.S. - New York City - it also brings the leading U.S. drug chain an already operating and largely successful fresh, prepared foods program right when it needs it most - during Walgreens' own category development stage.
Posted by Fresh & Easy Buzz at 7:03 PM