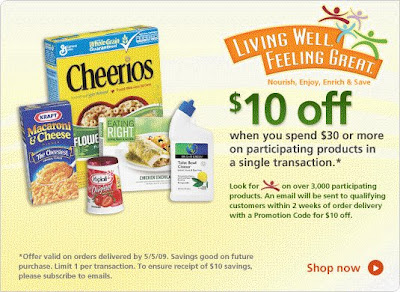 Pleasanton, California -based (San Francisco Bay Area) Safeway Stores, Inc., which operates over 500 supermarkets in California, Nevada and Arizona under the Safeway and Vons banners, along with a handful of warehouse format stores in Northern California called Pak N Save and one small-format "the market by Vons" store in Long Beach, California, has launched a smart, value-based promotion in which the grocery chain is leveraging supplier promotional monies to offer shoppers deep-discount store coupons when they purchase $30 worth of various branded and Safeway store brand products.

Safeway customers who purchase $30 or more worth of over 3,000 specially designated items in the stores receive a $10-off store coupon from Safeway which is good on their next visit to the store. That's a deep-discount of over 30% for a customer if he or she purchases only $30 worth of the participating items. The coupon is applied to a customer's total purchases, regardless of what they buy, on their next store shopping trip.

The promotion's name ties-in with Safeway's overall marketing positioning mission statement and focus, which is "Safeway: Ingredients For Life." And Safeway calls its supermarket format the "Lifestyle Format."

The majority of the discount savings offered by Safeway in the store coupon promotion is funded by promotional monies provided by the numerous consumer packaged goods brand marketers-suppliers participating in the program.

Safeway also is offering a select number of its store brands as part of the promotion, including its O' Organics organic foods brand, its Eating Right healthy foods brand and its new Bright Green store brand, which is a line of "green" household cleaning, laundry detergent, paper product and light bulbs.

Promoted in-store, in weekly ad circular and on Web site

Over 3,000 items across most store categories are tagged on the shelf and in displays with special "Living Well Feeling Great" signs that tell shoppers about the "by-$30-or-more-worth-of-participating-products-get-a $10-store-coupon" promotion.

All of the 3,000-plus items in the promotion are also being offered at promotional prices.

Additionally, Safeway devoted nearly a full page in its multi-page weekly advertising circular this week to the promotion, featuring a selection of the items in the ad section at additionally reduced promotional prices for the week -- April 22 - 28. New items will be advertised in its new advertising circular which begins tomorrow.

The supermarket chain also is promoting the coupon program in-store and on its Safeway.com Web site.

The promotion, which started earlier this month, lasts until May 5, 2009. Safeway could extend it, featuring a new set of the 3,000-plus promotional items.

The participating brand marketers give Safeway promotional allowance money that covers the majority of the grocer's margin loss on the discount given in the form of a coupon. Safeway eats the margin loss for its own store brand items.

By leveraging its suppliers in this way, Safeway is able to offer shoppers the 30%-plus discount on a $30 purchase of participating items in the form of the $10 store coupon, thereby keeping the amount of margin it contributes in the form of the coupon discount to a minimum.

The brand marketers also pay for the space in Safeway's advertising circular and for any floor space in the stores where there products might be displayed. This added source of revenue also helps Safeway offset its margin reduction or contribution to the deep discount coupons.

The promotion is worth it to the brands because Safeway features the items in a variety of ways which generally leads to a substantial increase in sales for participating brands and their respective suppliers.

The "Living Well Feeling Great" store coupon promotion isn't the only promotional program Safeway is currently using in which the retailer is leveraging supplier promotional monies.

For example, all this week Safeway has partnered with cereal giant Kellogg's in offering a promotion where shoppers who buy any three 4oz or larger boxes (mix & match varieties) of Kellogg's Special K Cereal get a free case (24 bottles), an about $4.99 value) of Safeway's Refreshe store brand bottled water.

The majority if not all of the promotional cost in giving the free case of water to shoppers is paid for by Kellogg's promotional funds.

Additionally, Safeway has teamed up with the Classico Pasta Sauce Brand for a promotion this week. Safeway is advertising all varieties of Classico Pasta Sauce in its stores at 2 for $4. Shoppers who buy two units of the pasta sauce also receive two free boxes of Safeway brand (12-16oz) Pasta. The Safeway brand pasta retails everyday in the stores for about $1.99. The promotion runs until April 30.

Like the Kellogg's Special K and the free case of Safeway Refreshe brand water promotion, all or most of the cost of the free pasta is being funded by the supplier's, in this case Classico, promotional funds.

Safeway got ahead of the recession on value

The promotions, all of which use supplier promotional funds to increase sales for Safeway, are part of the grocery chain's value-based program, which it started in earnest in early -to mid-2008 when it saw the first serious signs of the current economic recession.

Safeway has intensified its value proposition since then in a number of ways, including: lowering everyday prices on thousands of items in its stores; promoting items in-store and in its weekly advertising circulars at deeper discounts than in the past; creating additional value-based store brand items in its price-point-focused "Safeway" store brand line, its Basic Red line of non-foods household items, and its Lucerne value-based line of dairy products; and each week offering multiple promotions like those described in this story and others that offer deep discounts but most often leverage the margin loss by the supermarket chain by partnering with consumer packaged goods marketers and using their respective promotional monies to fund the majority of the discounts offered.

Safeway Stores, Inc. currently operates about 1753 supermarkets in the U.S. and Canada under a variety of banners.

According to most all industry rankings, Safeway is the fifth-largest food and grocery retailer in the U.S., after Wal-Mart (number one), number two Kroger Co., Costco (number three) and number four Supervalu, Inc.

Safeway is the number one, two or three market share leader in California, Nevada and Arizona., the three states where Tesco's Fresh & Easy Neighborhood Market has its 119 small-format combination grocery and fresh foods markets.

Wal-Mart operates its combination grocery and general merchandise Supercenters, which sell a full selection of fresh foods and groceries, it's Wal-Mart discount stores, which offer a limited assortment of groceries but no fresh produce or meats, and its Sam's Club membership warehouse stores, which offer a limited but complete selection of fresh foods and groceries, in California, Nevada and Arizona. Wal-Mart also operates about 30 of its Wal-Mart Neighborhood Market supermarkets in Arizona, along with four of its small-format Marketside combination grocery and fresh foods markets.

Kroger Co. operates the Ralphs supermarket chain in Southern California and the Smith's and Fry's chains in Nevada and Arizona respectively.

Costco operates its membership club stores in all three states. The stores sell fresh foods and groceries, along with general merchandise items of all kinds.

Supervalu, Inc. operates the Albertsons chain in Southern California and the upscale Bristol Farms supermarkets in the region (and one in San Francisco). It doesn't operate the Albertsons' stores in Arizona. Those stores are owned by the private equity firm Cerebus.

Look for more, similar types of promotions at Safeway-owned supermarkets in which the retailer offers similar store coupon and free product deals by leveraging supplier promotional monies, in addition to including its own store brands in the promotions. Doing so is not only a way to compete in the recession and gain sales, it's also a way to offer deep promotional discounts without such discounts coming completely or primarily out of the retailer's margins.

For example, when Tesco's Fresh & Easy distributes one of its $5-off purchases of $20 or more or $6-off purchases of $30 or more store coupons, the discount comes out of the retailer's margin because they are straight store coupon deals and not special promotions like Safeway's, which are funded entirely or primarily by supplier promotional monies.

Promotions lke this one funded by vendors is a week spot for Tesco.

Because the Fresh & Easy markets carry so few national brands and so few SKUs in general they can't leverage manufacturer promotional monies like Safeway is doing.

In fact Fresh & Easy offers fewer SKUs in its stores in total than the 3,000 items Safeway has in this promotion.

Fresh & Easy could do much more than they are doing though in partnership with vendors.

One problem is Tesco doesn't work with brokers, so they are missing out on many opportunities we bring to retailers.