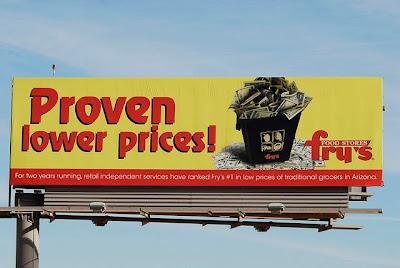 Fry's is turning up the heat, touting low prices at its Arizona stores on billboards like the one above in the Phoenix suburb of Chandler, as well as through promotions like its "competitor coupon match" program. The text on the billboard says: "For two years running, retail independent services have ranked Fry's #1 in low prices of traditional grocers in Arizona." Click on the photo to enlarge it.

We last wrote about Fry's extremely successful coupon promotion, in which it accepts the store coupons issued by all of its major competitors, along with doubling the value of all manufacturers' cents-off coupons up to a dollar, in a November 2010 piece - November 19, 2010: Kroger-Owned Fry's Store Coupon Jujitsu Ensnares Tesco-Owned Fresh & Easy Neighborhood Market in Arizona.

Fry's ended the "competitor coupon match" promotion in late December 2010. But the Kroger-owned grocery chain has brought it back for 2011, beginning this week, on January 26, and running until the grocer gives further notice. The promotion is good in all of the grocer's 120-plus Arizona stores. Metro Phoenix, where most of the states residents live, is where the majority of food and grocery dollars are spent in Arizona.

As we've said in past stories about the Fry's promotion, the default target of the store coupon aspect of the promotion ends up being Tesco's Fresh & Easy Neighborhood Market, because out of all the grocers listed above, its the only chain that issues discount store vouchers on a regular basis. These are the Fresh & Easy $5-off purchases of $20 or more; $6-off-$30; $10-off-$50 and the like store coupons the grocer has in distribution at virtually all times, as we written about extensively in Fresh & Easy Buzz.

If you're skeptical about our analysis that Tesco's Fresh & Easy Neighborhood Market is the default target (meaning the program isn't specifically aimed at Fresh & Easy exclusively but it's the competitor most affected anyway) of Fry's "coupon match" promotion, take a look here.

Additionally, take a look at what Fry's shoppers are saying about the return of the grocery chain's "coupon match" program here and here.

A few of Fry's other major competitors, like Albertsons, Bashas' and Safeway and a couple others, issue store coupons - such as $10-off-$50 and $25-off-$100 versions. But they do so on a sporadic basis, compared to Fresh & Easy's regular use of the discount vouchers. Fry's issues its own store coupons on occasion, such as a $5-off purchases of $35 or more voucher and a $10-off purchases of $100 or more version.

Another reason Fry's promotion targets Tesco's Fresh & Easy most directly, although as we've said that's not the strategy behind it for the Kroger chain, is because the Fresh & Easy neighborhood Market stores don't take manufacturers' cents-off coupons as a matter of policy.

In the program, Fry's Food Stores allows shoppers to combine the use of one of these store coupons, such as a $6-off-$30 voucher from Fresh & Easy, with their manufacturers' coupons, deducting both types from customers' total grocery order purchases at checkout.

For example, suppose mom or dad head off to a Fry's supermarket with a grocery list, a $6-off purchases of $30 or more Fresh & Easy store coupon, and a stack of manufacturers' cents-off coupons, each having a face-value of 50 cents and over.

Once at the store, our grocery shopper then fills his or her cart with an assortment of food and grocery items - ranging from milk and bread, to packaged snacks, household cleaners, breakfast cereals and more.

At the checkout lane our shoppers hands the grocery checker the coupons, then braces herself for the total, as the Fry's clerk scans the items.

The pre-coupon deduction total just so happens to end up being $50, right on the button.

Smiling, the friendly Fry's checker says..."Let me deduct the coupons for you." Scanning each coupon, there are 10, all with a value of 50 cents or higher, our shoppers $50 market basket purchase now drops down to $40. But there's more to come. Lastly, the checker scans the $6-off Fresh & Easy store coupon (the manufacturers' cents-off coupons are deducted first) and announces..."That will be...$34, please.

Not bad, $16 off a total grocery order of $50, thanks to the doubling of the manufacturers' cents-off coupons and the Fresh & Easy $6-off store coupon combination. Fry's allows shoppers to use only one coupon per retailer, per order. However, if a customer has a store coupon from Fresh & Easy, say a $6 off, and one from Albertsons, for example, such as a $10-off-$50 voucher, they can then use both on a single order. Therefore, in our example, the customer order would drop to $24, if he or she used both the Fresh & Easy and Albertsons' store coupons, in this particular example.

Well, we should note that "it's not bad for the shopper." But it's less than good for Fry's gross margin on that particular order and any others like it. Why? The chain gets reimbursed for the face value of the manufacturers' coupons, plus a carrying charge of a few pennies for each coupon, but has to eat the rest of the deduction it gives, up to that dollar, along with eating the entire value of the Fresh & Easy Neighborhood Market store coupon or those from any other competitor.

If Fry's wasn't owned by Kroger, the second-largest retailer of food and groceries in the U.S. after Walmart Stores, it wouldn't be able to sustain such a margin hit. But since Fry's is just one of Kroger's many chains, the mega-retailer can sustain the margin hit better than a smaller chain because it can spread it out over many chains and stores throughout the U.S.

And Fry's, which is the number two market share leader in Arizona after Walmart Stores, Inc., believes the added sales it gains from the coupon promotion in the hyper-competitive metro Phoenix market is worth taking this margin hit. If not, the chain wouldn't have brought the "coupon match" promotion back so soon in 2011, after doing it for more than half of 2010.

Meanwhile, the fact Fry's is accepting store coupons, along with doubling manufactures' cents-off coupons, is a tough nut for Tesco's Fresh & Easy in metro Phoenix, where the grocer has 28 stores, after closing six markets in November of last year.

The deep-discount store coupons are Fresh & Easy's primary promotional tool, in addition to its weekly advertising circular. It issues the vouchers regularly, nearly always having at least one version, and often times two or three versions, in circulation.

Based on our research and reporting - which you can see at the stories linked at the end of this piece - the Arizona Fresh & Easy stores experience a significant drop in sales, which is something Tesco can't afford, whenever Fry's runs its "competitor match" coupon promotion. Further, the fact Fry's kicked-off the promotion on Wednesday without issuing an end-date, could mean the Kroger-owned chain plans to run it non-stop over the next few months, which is something it did in 2010.

If that's the case, which sources tell us it is, the increased competition from the region's number two food retailer, Fry's, comes at a very bad time for Tesco's Fresh & Easy, which not only is trying to grow its same-store-sales considerably, but also must significantly increase its overall margin, which currently sits at a negative-38%.

After California, where Tesco has 107 of its 156 small-format fresh food and grocery stores, metropolitan Phoenix, Arizona has the second-highest number of stores, at 28, followed by 21 units in metro Las Vegas, Nevada.

Although the Arizona store-count is much lower than in California, Tesco needs to grow same-store sales in all of its Fresh & Easy units, not just those in one market region or another. And the more competition, which equals price pressure, means the harder it is for Fresh & Easy to move that gross margin up into the positive sphere.

Metro Phoenix, with Walmart, Kroger, Safeway, Albertsons and Bashas' - the top five in market share (in that order) battling against each other, along with niche players like Sprouts, Sunflower, Whole Foods, Trader Joe's, Fresh & Easy and others doing the same (and with WinCo Foods on the way in 2012) - is already arguably the most-competitive grocery retailing market in the U.S., as we've said in Fresh & Easy Buzz for over three years.