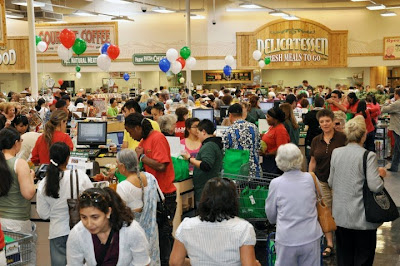 Phoenix, Arizona-based Sprouts Farmers Market, which we've reported (here) is in talks to acquire the Henry's Farmers Market chain from its owners, Apollo Global Management/Smart & Final, plans to open its second store in Northern California no later than mid-April of this year, Fresh & Easy Buzz has learned. The grocer hasn't yet announced the store's opening date.

The store, which we've reported on and written about previously, is in the Stanford Ranch shopping center in Roseville, California, which is in the Sacramento, California metropolitan area.

Sprouts is renovating a vacant building in the center, which previously was home to a Linens N' Things home furnishings soft goods store, for what will be its second farmers market-style format, natural and organic products-focused grocery store in the Northern California region.

As we've previously reported, Sprouts has a third location, in the East Bay Area city of Dublin, which it also hopes to open in 2011.

The grocery chain is also searching for numerous additional store sites throughout Northern California, putting a focus on the San Francisco Bay Area and the Sacramento metropolitan region.

Smart & Final-owned Henry's Farmers Market, which opened its first store in Northern California at 8211 Laguna Boulevard in Elk Grove near Roseville in August 2010, has also been considering opening a store in Roseville. However, in light of the current negotiations between Sprouts Farmers Market and Henry's owners, private equity firm Apollo Global Management/Smart & Final, we can't report at this time that those plans remain in consideration.

The planned Walnut Creek Henry's location would be a perfect fit for Sprouts Farmers Market, should the grocer's talks to acquire Henry's Farmers Market, which continue to go on this week, result in the privately-held, Arizona-based chain's buying Henry's.

New stores 'sprouting' up all over the region

The Sacramento region, including Roseville, is set to see an influx of new food retailing players and grocery stores this year, and into 2012.

However, based on our most recent information, we don't expect the Tesco-owned fresh food and grocery chain to open any of its Sacramento-area stores until, at the earliest, late 2011. And it's possible the first stores in the region won't open until early 2012. [See - December 27, 2010: First Look at the Pacifica, California Fresh & Easy Neighborhood Market Store, One of the First Opening in Northern California in Early 2011 and December 14, 2010: Fresh & Easy Neighborhood Market to Open 5800 Third Street 'Flagship' Store in San Francisco Later in 2011 Than Originally Announced.

Additionally, Whole Foods Market, which has a store in Roseville and one in Sacramento, plans to open its third store in the Sacramento metro region this year, in Folsom.

Whole Foods is also scouting for additional store sites in the Sacramento region as part of a major new store growth initiative for Northern California, which its been undertaking for a few years, and accelerated in 2009-2010. [See - May 9, 2010: A Whopping 15 of Whole Foods Market's 41 New Stores in Development are in California - And Nine of The 15 Are In Northern CA

Further, as we reported earlier today, Walmart is close to acquiring its first smaller-format store location in Northern California, at Highway 65 and Second Street in the city of Lincoln, which is near Sacramento, and has plans to grab additional sites in the Sacramento region for the small-supermarket-style food and grocery stores. [See - January 10, 2011: Walmart 'Gets Real' With Smaller-Format Grocery Store Initiative in California; First Stores On Tap.]

Add to the mix popular discount retailer Target Corp., which is focusing aggressively on the Sacramento region with its "P-Fresh" food and grocery store initiative in Northern California. Target currently has "P-Fresh" grocery markets in 12 of its discount format stores in the Sacramento area, including in Elk Grove, Roseville and Lincoln, and has plans to add the markets inside additional general merchandise stores in the region this year. [See our September 26, 2010 story for details on Target's "P-Fresh" in Northern California: While Tesco's Fresh & Easy Neighborhood Market Postponed, Target Opened 42 'P-Fresh' Fresh Food and Grocery Markets in Northern California.]

Locally-based and family-owned supermarket chain Raley's, which has its corporate headquarters in West Sacramento, California, is the market share leader in the Sacramento region, followed by another family-owned chain, Modesto, California-based Save Mart Supermarkets, which operates supermarkets under its Lucky banner and discount warehouse stores under its FoodMaxx banner in the region. Safeway Stores, Inc., which is headquartered in the East Bay Area city of Pleasanton, about 90 minutes from Sacramento, is a close third in market share rankings in the Sacramento metro market, although its number one in all of Northern California.

Raley's, which has 134 stores and about $3.4 billion in annual sales, operates stores under the Raley's (super stores), Bel-Air (supermarkets) and Food Source (discount warehouse stores) in the Sacramento market region.

Sprouts Farmers Market, which has 54 stores in Arizona, Colorado, California and Texas, currently has five new stores set to open this year. More new locations are set to be announced later this year.

In addition to the Roseville, California Sprouts market opening in April 2011, the four other announced new stores set to open this year are in Southern California - Westlake Village and Redondo Beach - and Texas - Fort Worth and Carrollton.

The Forth Worth store, which is at 4650 SW Loop 820 in the Overton Park Plaza shopping center, is set to open this month, on Wednesday, January 26.

Of course, if the discussions with Apollo Global Management/Smart & Final over acquiring the 46-store Henry's Farmers Market chain result in a deal for Sprouts Farmers Market, the Arizona-based chain, owned by members of the Boney family, the same family that started the Henry's chain, will nearly double its store count to over 100 units.

Meanwhile, regardless of which direction the deal negotiations end up going - they're looking positive for a deal right now, according to our sources - regarding a possible Henry's Farmers Market acquisition by Sprouts, the Arizona-base chain plans to continue to grow its store-count significantly in Northern and Southern California, along with in Texas (current major focus, along with California), Arizona and Colorado - plus potentially adding a couple new Western U.S. states - over the next few years.

>Read our 2010 'Northern California Market Region Special Report' series here for a current primer on food and grocery retailing in the region. See the numerous linked stories at the end of the piece at the link.
Posted by Fresh & Easy Buzz at 6:02 PM

Where will the store in Redondo Beach be located (address)?

on Hawthorne Blvd next to the South Bay Galleria. Where the bowling alley and Theaters used to be.