Tesco Launches Private Brand 'Lasagne Sandwich' in the UK Today...With No Apologies to The Earl of Sandwich 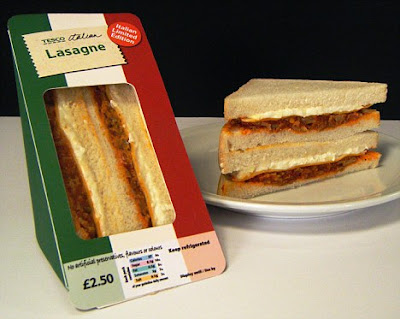 The Tesco Lasagne Sandwich went on sale today in all of the retailer's United Kingdom stores.

Tesco, the United Kingdom's (UK) leading grocer, third-largest food retailer in the world, and owner and operator of Fresh & Easy Neighborhood Market here in the former British colony now known as America, might just have John Montague, the Fourth Earl of Sandwich, who legend has it invented the humble sandwich in London in 1762, spinning in his grave at this very moment.

By the way, that same legend says the sandwich then made it's way to America after English cook Elisabeth Leslie, who migrated across the pond from the mother country, published a book here which included a recipe for ham sandwiches as a main dish.

Why might The Earl, who's original sandwich consisted of only some meat and cheese between two pieces of bread - that humble sandwich - be spinning in his grave?

Today Tesco launched what it's touting as the "World's First Commercial Lasagne Sandwich" in all of its UK stores. Yes, you read correctly - a lasagne sandwich.

Tesco's private brand Lasagne Sandwich, which we're sure already has our Italian (and others for that matter) readers a bit skeptical, "is made up of two thick slices of bread, a filling of diced beef in a tangy tomato and herb sauce layered with cooked pasta sheets and finished with a creamy cheddar, ricotta and mayonnaise dressing," according to its creator, Tesco food developer Laura Fagan.

"The inspiration comes from my own student days and how certain foods could sometimes taste much better the next day – such as pizza, lasagne and even curry," Tesco Lasagne Sandwich creator Fagan says.

"Lasagne sandwiches were a favourite of mine back in student days and were really popular with all my mates at university. It was the type of food that could be made very quickly from lasagne leftovers but could really keep you going between meals or equally prove to be the perfect breakfast food after a long night."

The sandwich is merchandised and designed to be served cold, although we suppose one could warm it up if they choose, in order to get that true "lasagne" experience.

In creatively venturing "outside of the loaf" in coming up with the world's first lasagne sandwich, Tesco also clearly decided not to aim the Italian meal between two slices of white bread at the health conscious eater. According to the Tesco Lasagne Sandwich package, it has 565 calories, which is over a quarter of the recommended daily caloric intake for an adult male.

Additionally, the lasagne sandwich's fat content is 26.9 grams, which is nearly 40% of that same adult male's suggested daily maximum.

In other words, the sandwich is in fast food territory. A typical quarter pound or triple burger from a fast food joint like Burger King or McDonalds has about the same caloric and fat content as the Tesco Lasagne Sandwich, according to a little research.

And if one wants to carbohydrate load, the combination of the cooked pasta sheets and white bread will probably do the trick.

Tesco has been reinventing the humble sandwich in the UK recently, without even an apology to the Earl of Sandwich who, according to that same legend, invented the sandwich when he asked for bread, cheese and meat to be brought to his table in a London gambling club so he could continue playing cards without leaving the premises to eat.

For example, in June Tesco created a Singing Sandwich in honor of the World Cup. The singing sannie played the Ole Ole Ole Ole football chant when the packaging was opened.

A couple years ago around Christmas time Tesco also launched what it says is the UK’s first ever commercially made sweet sandwich - a banana and chocolate creation between two slices of white bread.

The Earl would probably approve of that one, actually. Legend also has it he had a ...well, "legendary" sweet tooth.

But although we give it to the British retailer that its Tesco Lasagne Sandwich and World Cup Singing Sandwich are both commercial firsts, we beg to differ when it comes to the banana and chocolate version.

In our analysis, it's merely a variation on what was the favorite sandwich of America's King, Elvis Presley. The King's favorite sandwich, often referred to simply as "The Elvis," was a banana and peanut butter on white bread creation. He also regularly enjoyed a couple value-added versions. One was peanut butter, banana and fried bacon, plain or grilled.

Elvis ate his first peanut butter and banana (and probably version with chocolate) sandwich in the 1950's (and possibly earlier), over a half century ago. Therefore, Tesco's is an edited version rather than an original creation, of "The Elvis," in our humble analysis.

Additionally, recipes for various versions of "The Elvis" have been published in cookbooks in the U.S. for nearly as long, and numerous restaurants - P.B. Loco and Peanut Butter & Co. are just two - offer versions on their menus. Dozens of roadside diners, cafes and even a few grocery stores in the southern USA, where Elvis was born and lived most of his live, have sold the different versions of the peanut butter and banana sandwiches, including adding chocolate in some cases, for decades.

But were Elvis still alive, we have a feeling he would like Tesco's Lasagne Sandwich, as it has all the fat content and caloric heft of a peanut butter, banana and fried bacon sandwich.

We haven't yet tasted the Tesco Lasagne Sandwich. It just hit the stores in the UK today. But we plan on giving it a go when next in London.

But perhaps we won't have to wait until then. That's right, the burning sandwich question is: Might there be a fresh & easy brand Lasagne Sandwich hitting Tesco's 159 Fresh & Easy Neighborhood Market stores in California, Nevada and Arizona soon? That's a scoop we don't have. But as we often say - stay tuned.

January 25, 2010: Walgreens Eyeing San Francisco For Fresh Foods Program: Could it Strike Category Gold in the City By the Bay?

May 18, 2009 piece - Strategy Session: Tesco's Fresh & Easy Needs to Move From its One Store Brand Fits All Strategy to A 'Three Brand' Store Brand Strategy

March 9, 2009: An English Village, A British Fresh Chicken Brand and Tesco Fresh & Easy's New 'Buxted' Discount Fresh Meat Brand: What Do All Three Have in Common?