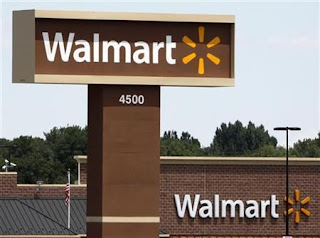 Bentonville, Arkansas-based Walmart Stores, Inc., the largest retailer in the world with annual sales approaching half-a-trillion dollars, is taking the first concrete steps to turn its plans to open smaller and small-format food and grocery stores in California into reality.

Walmart, which also happens to be the top seller of food and groceries in the United States, has bought a 32,000 square-foot building in Downey, California, which it plans to most-likely convert into a version of its 20,000 square-foot (selling space) 'Neighborhood Market By Walmart' prototype food and grocery store, which it's been testing in Rogers, Arkansas for the last couple years, Fresh & Easy Buzz has learned, although the store could have a different name.

The building, at 12270 Paramount Boulevard in Downey, is currently occupied by Alin's Party Depot, which sells a variety of party-oriented consumer goods. The retailer lost its lease on the building last year and is set to close and vacate the store at the end of this month.

In addition to the Downey location in Southern California, Walmart is close to either purchasing or signing a lease for a vacant 30,000-32,000 square-foot building at the other end of the state, in Northern California. The location, at Highway 65 and Second Street in Lincoln, California near Sacramento, formerly housed an independent supermarket, Rainbow Market.

Tesco has plans to open a store in Lincoln, perhaps as early as the end of this year. The locations is at Lincoln Boulevard and Sterling, and isn't too far from the site Walmart is preparing to acquire.

Fresh & Easy Buzz has been reporting on Walmart's plans to open smaller-format grocery stores in California, including in the northern part of the state, since late 2007, when the blog was started. Most recently, in this July 6, 2010 story - Walmart Looking for Store Sites in Northern California For 20,000 Sq-Ft Neighborhood Market by Walmart Prototype Store - we offered details and analysis about the retailer's plans in Northern California for 2010-2011, based on information provided by our sources.

Three months after we published our story, Walmart announced in October 2010 it's plans to open 30-40 smaller and small-format food and grocery stores, but not any more of its 'marketside by Walmart' format stores, in the U.S., as a test. So far the retailer has announced or confirmed plans for smaller stores in metro Chicago, Washington D.C. and New York City - but not California. Walmart has so far received approvals for the stores in Chicago.

However, as we said in our July 2010 piece, and are reporting today in this story, smaller format food and grocery markets from Walmart Stores, Inc. are coming to California - and soon.

In the July 2010 story we also reported that Walmart has been searching for numerous sites for the smaller-format stores, most being in the 20,000-30,000 square-foot range, throughout Northern California, with a focus on the Sacramento region, parts of the Northern Central Valley, and the San Francisco Bay Area.

The Sacramento region has been getting a particular focus from Walmart and its local commercial real estate firm since the summer of 2010.

According to our sources, among the specific Sacramento-area locations Walmart is looking closely at, in addition to the former Rainbow Market in Lincoln, include a former Nugget Market store at Florin Road and Greenhaven Drive in Sacramento, and two vacant Albertsons supermarkets, one at 6184 Sunrise Mall Road and the other at 6454 Tupelo Drive, in the Sacramento suburb of Citrus Heights. Nugget Markets is a local chain based in Woodland, California, which is about 12 miles from Sacramento, and located next door to Davis, home of the University of California at Davis campus.

Walmart is also close to agreeing with landlords for other locations in the Sacramento region, as well as in parts of the San Francisco Bay Area, where the retailer has a near-zero food and grocery retailing presence in terms of market share.

Speaking of Davis, California, our sources also tell us Walmart has a potential interest in the small-format Davis IGA Market in the university city should its owners, the Delano family, have to sell or close the store. The Delano family closed five of the seven stores they operated in Northern California late last year, as we reported on in November. See - November 29, 2010: Veteran Grocer Harley DeLano's 'DeLano IGA Markets' Chain On the Verge of Closure in San Francisco Bay Area; and November 30, 2010: DeLano's IGA Markets Closing Five Stores in San Francisco & Marin County; Fairfax, Davis Units to Remain Open (For Now). The Davis IGA Market is in a moderate income neighborhood and is the only grocery store in what is the eastern part of the city of about 60,000 residents.

The Delano's own the Fairfax and Davis stores under a different ownership structure than they did the San Francisco Bay Area markets they were forced to close, which is why the two units remain open. However, Kroger Co., which leased the store buildings to the Delano's, has filed a lawsuit seeking over $1 million in back rent from the grocers. As such, it's not clear if the father and son team will be able to keep the Davis and Fairfax stores open.

Based on the information we've been able to obtain thus far, we aren't 100% sure (nor are we sure Walmart knows itself) what the precise format of the Downey, California smaller-format grocery store will be. 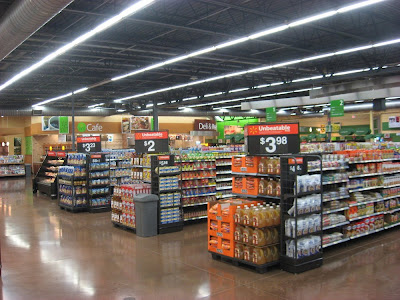 However, according to our research and information, it likely will be a version of the Rogers, Arkansas 'Neighborhood by Walmart' prototype store (pictured above and below), which includes an in-store pharmacy, fresh bakery, and cafe/deli/prepared foods department, as well as offering fresh produce, meats and a strong but limited selection packaged food and grocery items. 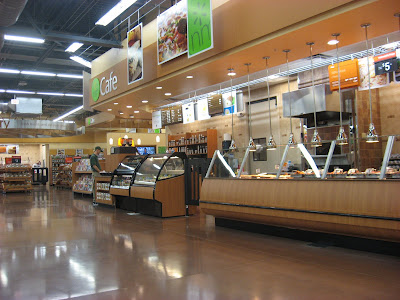 For those of you reading this who haven't seen the Rogers' prototype store, think of the format as a smaller version of Walmart's Neighborhood Market supermarkets, which average about 40,000 square-feet, but with smaller in-store departments and fewer grocery SKUs, along with some significant design and merchandising differences.

Based on the building's 32,000 square-feet, depending on the sizes of the back-room area and the in-store pharmacy (if it includes one, which is most-probable), we estimate the smaller-format Walmart store to be, in terms of selling space, in the 20,000-30,000 square-foot range. This fits well with the selling space area of the Rodgers, Arkansas prototype store, as well as with the smaller and small-format size stores Walmart said in October 2010 it planned to focus on. [See - October 13, 2010: Simon Says: Walmart U.S. CEO Outlines Smaller Store Strategy and Plans; Walmart to Offer Groceries Online in USA and October 11, 2010: Walmart to Outline its Urban-Focused Smaller-Format Grocery Store Plans Wednesday; What Might Be In-Store?]

Not long after the Alin's Party Depot party goods' store vacates the building in Downey at the end of the month, Walmart plans to start renovations on it, likely opening what will be the retailer's first smaller-format food and grocery store in California before the end of 2011.

The Walmart smaller-store location at 12270 Paramount Boulevard is just minutes away from the 8320 Firestone Boulevard Fresh & Easy Neighborhood Market store, as you can see here.

The smaller-format Walmart food and grocery market will be at least twice the size of the Fresh & Easy store and, although it won't be a 'marketside by Walmart' format or banner store like the four in metro Phoenix, Arizona, the "smaller-mart"will carry a full-selection of Walmart's'Marketside' private brand fresh food and fresh-prepared foods products, according to our information.

The Sacramento area, along with the San Francisco Bay Area are the two key major market region focuses for Tesco in Northern California, where it plans to start opening its first batch of stores in a couple months. none of the first stores set to open are in the Sacramento area. [See - December 27, 2010: First Look at the Pacifica, California Fresh & Easy Neighborhood Market Store, One of the First Opening in Northern California in Early 2011 and December 14, 2010: Fresh & Easy Neighborhood Market to Open 5800 Third Street 'Flagship' Store in San Francisco Later in 2011 Than Originally Announced, for example.]

Walmart's target cities and types of neighborhoods for its smaller-format stores in the Sacramento region look to be in many cases the same ones as Tesco's for Fresh & Easy, based on our research and reporting.

Although we expect Walmart to open just a handful of smaller-format food and grocery stores in California this year, if those initial stores do well, we could see dozens of the "smaller marts" open in the Golden State in 2012, particularly in parts of Southern and Northern California, like Los Angeles and the San Francisco Bay Area, where Walmart has had trouble gaining approval for its supercenters, along with struggling in some instances to get city and county government approvals for discount format stores it wants to convert into hybrid supercenters.

The smaller-store stores Walmart will open in California starting this year aren't upscale food and grocery markets, nor will they be located in high-income neighborhoods. Instead, the stores are targeted to lower-to-upper-middle-income shoppers, and will be in cities with moderate income levels in the main, which is the strategy Tesco is following with its small-format Fresh & Easy stores.

In addition to its smaller-store initiative in California, which is fast on the way from concept to reality, Walmart also has other major initiatives set for California beginning this year, including new supercenter openings, development and growth. [See - May 6, 2010: Going Smaller & Getting 'Hybrid': Walmart's Smaller Supercenter in Vacant Retail Buildings Strategy Began in 2008, as an example.