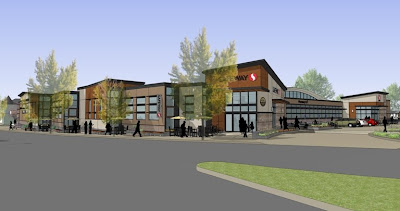 Safeway plans to turn one of its oldest stores - a smaller, more conventional supermarket at Shattuck and Henry in Berkeley, California's "Gourmet Ghetto" neighborhood - in the San Francisco Bay Area into the gleaming, two-level, 42, 492 square-foot neighborhood-oriented "Lifestyle" format supermarket pictured in the artist's rendering above. [Credit: Lowney Architecture.] (Note: Click on all the artist's renderings to enlarge.)

Safeway said price-cutting measures and deflation are largely the reason for the 41% quarter-over-quarter profit drop.

While this is true, and the recession has played a big part in Safeway's price-cutting, what's also true is that Safeway (along with other conventional supermarket operators like Supervalu, Inc.), has been having to aggressively price-cut because of increased competition from discount food and grocery retailers like Walmart, Costco and others on the price-focused end and specialty grocers like Whole Foods Market, Trader Joe's and others on the higher, or more specialty-oriented, end of the spectrum. It's sort of a conventional supermarket chain sandwich, with Safeway being the meat and the two different types of grocery formats - discount and specialty - being the two slices of bread, pushing from both ends.

This phenomenon is no less the case in Safeway's home San Francisco Bay Area market, where it's facing increased competition on all fronts - from disounters to specialty grocers.

Even when the economy gets substantially better it's going to be difficult for Safeway, along with Supervalu, and Kroger, the three leading U.S. supermarket chains, to raise prices much because of this existing and growing alternative format competition, as well as due to the competition among each other and other conventional supermarket format competitors. Inflation will help a little when it comes but the end of food and grocery price deflation doesn't appear anywhere in sight, in our analysis.

But despite the increased competition in the Bay Area, where it's headquartered and where about 60% of its 200-plus Northern California supermarkets are located, Safeway Stores, Inc. remains the market share leader in the nine-county region, home to about 7 million people, by a long shot. And it's protecting its home turf by remodeling numerous stores in the region, along with building new ones. Modesto, California-based Save Mart Supermarkets' Lucky chain is the number two market share leader in the Bay Area, but Safeway holds the top position by a substantial number of share points.

On July 25 we wrote about Safeway's planned new flagship store in the East Bay Area city of Pleasanton, where the grocery chain has its corporate headquarters, which the grocer recently unveiled to various groups in the city. [See - July 25, 2010: Safeway to Start Construction on New Pleasanton, California Flagship Store Soon; Thanksgiving 2011 Target Opening]

Safeway on Shattuck in Berkeley: Night and day

On July 26, Safeway unveiled plans for yet another new supermarket - actually a stem-to-stern renovation and expansion of a smaller, existing store at Shattuck and Henry street, in the East Bay Area city of Berkeley, which is about 25 miles from Pleasanton. The renovation and expansion project is so extensive though, for all intents and purposes it's a "new" store.

The store will be Safeway's latest version of its "Lifestyle" format, which includes expanded organic and specialty foods selections, an in-store Signature Cafe prepared foods center, expanded fresh produce and meat departments, an in-store bakery with a cafe, along with numerous other special features. (Before and after: You can view the various existing Shattuck store's departments here, along with what the same departments are planned to look like in the new store.)

The project's designer for Safeway is Oakland, California-based Lowney Architecture, which is currently working on two other major Safeway store renovations in the Bay Area.

The firm also is the designer of the 20,000 square-foot building in the Pedro Point shopping center in Pacifica, California, in which Tesco's Fresh & Easy Neighborhood Market plans to open a store. Fresh & Easy is using about 14,000 square-feet in the building. The remaining space is currently being offered for sub-lease. The building has been completed for over a year. [See - July 21, 2010: Vacant Fresh & Easy Neighborhood Market Store in Pacifica, California Has the City's Mayor in a Pickle]

Lowney Architecture, which is the design firm of record for all of Apple Computer's Apple retail stores nationally, also designed the "European Food Hall-Style" Whole Foods Market store in Oakland and is currently working on new Whole Foods stores in San Jose (60,000 square-feet) and in Dublin (55,000 square-feet), which is near Safeway's headquarters in Pleasanton. [See - May 9, 2010: A Whopping 15 of Whole Foods Market's 41 New Stores in Development are in Northern California and June 14, 2010: Newly-Named Whole Foods Market CO-CEO Walter Robb Comes Full Circle With the Opening of the New Store in Mill Valley CA] 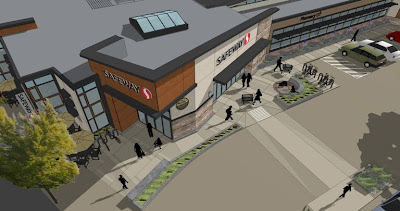 Pictured above is an artist's rendering of the planned Safeway store on Shattuck, which is located in the heart of Berkeley's "Gourmet Ghetto," home to dozens of restaurants and retail shops featuring nearly every kind of specialty, gourmet, ethnic, organic and locally-grown food and beverage one can think of.

Among the key design features of the planned expanded and revamped Safeway supermarket on Shattuck and Henry in Berkeley are:

>A new entry plaza and seating areas along Shattuck (depicted below) 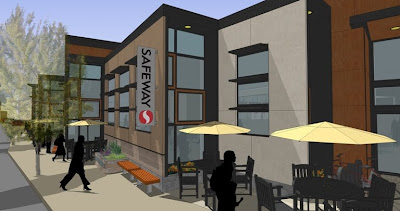 >Bay-friendly landscaping, bio-filtration of site water runoff, and an emphasis on native plant species for all landscaping.

>A 20-foot landscaped buffer at adjacent neighbor and improved landscaping along Henry Street.

Safeway Stores, Inc. and its architecture firm have have been working on the design for the store for a considerable amount of time. The first version, which was to demolish the Shattuck store and build a new supermarket from the ground up, was rejected by numerous neighborhood groups and individuals. Since then, Safeway and the designers have been working closely with neighborhood groups and residents in the planning of the store.

In fact, Safeway introduced the plans and design for the store on July 26 in a letter to residents of the Shattuck neighborhood. The letter is below (in italics):

Last December at a community meeting held at the Jewish Community Center, Safeway presented a new approach to improving this aging store. The proposal features a thorough remodel and addition of about 15,000 square feet instead of demolishing the store. (Safeway will keep the store open during construction to minimize shopper inconvenience.) In April of this year Safeway began meeting with the city’s Design Review Commission. The Commission’s suggestions, along with those of neighbors and other concerned residents, greatly improved the design and addressed important issues for Henry Street residents across the street from the store.

Today’s design is a vast improvement over the current store -- both inside and out. Great care was taken to bring the store out to Shattuck, enliven the corner with chairs and tables and attractive benches, provide vistas into the store by adding lots of glass, and modernize the exterior using concrete, composite wood, quartzite tile and glazed aluminum. We responded to many concerns brought to us by neighbors including retaining more trees, increasing bicycle and pedestrian safety, enclosing the loading dock, relocating mechanical equipment, and eliminating outside dumpsters and recycling.

The new design features a revamped parking lot with designated pedestrian paths shaded by a new canopy of trees. A ramp from the surface lot leads to underground parking which will be light and bright and have easy access to the store. The landscaping plan calls for saving most of the healthy mature trees, while adding thirty new trees, along with drought tolerant shrubs, bay friendly groundcovers, and climbing vines that cover walls facing Henry Street and deter graffiti. Native grasses and plants on the Henry Street side serve as a bioswale, filtering groundwater run-off before it empties into stormwater drains. The remodeled building will be far more energy efficient and is expected to be LEED compliant.

The next step for this proposal is a hearing before the Zoning Adjustment Board (ZAB) on August 12th at 7pm. The members of the ZAB will be trying to assess community support for improving this store. While we are very pleased to have the enthusiastic support of the North Shattuck Merchants Association, it is equally important that we demonstrate that Berkeley residents want Safeway to make this investment in their community to expand and improve the store. Safeway remains the only large grocer in California to employ union workers. The remodeled store will create about 35 new union jobs and re-invigorate the unique North Shattuck shopping area. In addition, the new store is expected to generate more than $200,000 annually to the City of Berkeley through increased sales and property taxes.

As the last paragraph in the July 26 letter says, Safeway Stores, Inc. must still get approval for the renovation and expansion of the store from the City of Berkeley. That's no easy achievement in Berkeley, which along with being the home of the University of California's flagship campus and the city where the 1960's Free Speech Movement was born, is known for its citizen's participation in local land-use planning and politics.

For example, many neighborhood residents think the store will be to big and cause traffic congestion, even though Safeway did address those issues in its revamp of the plans and design. But then - it is the residents' neighborhood.

Other residents though like the design. The existing Safeway at Shattuck and Henry is small and older, as you can see in the link above. As such, many want a larger, modern and more upscale version like the one Safeway is proposing.

For Safeway, the new store will mean significantly increased sales, particularly of higher margin fresh, organic and specialty foods, which because the current store is smaller can't be merchandised to the extent the grocer would like to. The neighborhood is a particularly premium demographic - it's called the "Gourmet Ghetto" after all - for one of Safeway's newest version "Lifestyle" format supermarkets.

Odds are that Safeway will get the store approved with just a few minor changes. The grocer plans to start construction very soon after that approval comes, it says.

Additionally: Click here to read a selection of past stories on Tesco's Fresh & Easy Neighborhood Market and Northern California. Click the "older posts" link at the bottom of the linked pages for additional posts on the topic.