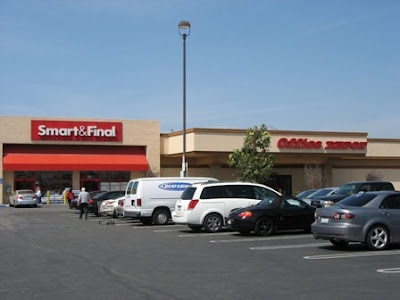 Pictured above is the existing Smart & Final non-membership warehouse store and the vacant Office Depot store building (to the right) next door, in the Twin Peaks Plaza shopping center in Lake Forest, (Southern) California. Smart & Final bought the Office Depot building. It's combining the two spaces into one in a major renovation. The combined space will create an about 41,000 square-foot SmartCo Foods store. [Photo credit: City of Lake Forest, California.]

For example, read our series of stories linked below:

>Tuesday, August 17, 2010: And Then There Were Five: Smart & Final Completes its Mission of Opening Five SmartCo Foods Stores in Metro Denver Before Summer Ends

Smart & Final says it plans to open a total of 20-25 of the 41,000 -to- 60,000 square-foot hybrid supermarket/non-membership warehouse/farmers market-style markets in the Denver region over the next few years.

In the June 28, 2010 story linked above, we reported that Smart & Final plans to open SmartCo Foods stores in California and Arizona this year, as well as in Metro Denver.

The first California SmartCo Foods store will be in the south Orange County city of Lake Forest, in Southern California, in the Twin Peaks Plaza shopping center at 23601-23641 El Toro Road.

The store is going into an existing Smart & Final non-membership club store the retailer is renovating, along with a vacant Office Depot big box building next door, which Smart & Final has acquired. When the renovation is completed, the combined two spaces will create a SmartCo Foods store of about 41,000 square-feet, which is similar in size to the smallest of the five stores currently open in Metro Denver. Those five stores are in former Albertsons supermarket buildings.

Smart & Final plans to open the SmartCo Foods store before the end of this year. However, depending on the pace of the current major renovation, it may not open until early 2011.

The city has a high median household income of $94,107. The popular and affluent planned communities of Foothill Ranch and Portola Hills are part of the city of Lake Forest.

As we've said in the pieces linked near the top, the addition of the SmartCo format and banner to the Southern California market will add yet another layer of competition to what's an already very competitive region when it comes to food and grocery retailing. Additionally, Orange County, which has been a major focus for Tesco's Fresh & Easy Neighborhood Market in Southern California, is one of the most grocery-stored and competitive sub regions within Southern California.

Smart & Final is currently looking for additional locations for its SmartCo Foods stores in Orange County and elsewhere in Southern California.

Additionally, as we've previously reported, plans are to open SmartCo stores in Metropolitan Phoenix, Arizona, which is one of Fresh & Easy Neighborhood Market's four market regions, with its current 159 stores. The other regions are: Southern California; California's Central Valley; and Metro Las Vegas, Nevada.