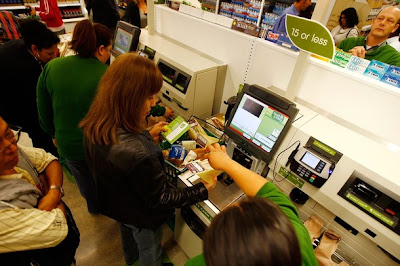 California Assembly Bill 1060, (AB 1060), which bans the sale of alcoholic beverages at self-service checkout counters in grocery stores and all other types of retail stores offering alcoholic beverages for sale, passed in the California State Senate yesterday. The vote was 22 -to- 12 in favor.

[Read our August 15, 2010 story: Bill to Ban Alcoholic Beverage Sales at Self-Service Checkouts Would End 'Self-Service Only' at California Fresh & Easy Neighborhood Market Stores for background and details on the legislation.]

The bill now goes to California Governor Arnold Schwarzenegger, either for his signature or veto. If the Governor signs AB 1060, it will become law in the Golden State. The Governor hasn't said whether he plans to sign or veto the bill.

The California Grocers Association (CGA), the trade group for chain and independent grocers in California, is asking the Governor to veto the self-service checkout alcoholic beverage ban bill. The bill passed in the State Assembly earlier this year.

Today, CGA president Ronald Fong said in letter to the governor and in a statement: "Assembly Bill 1060 presents itself as feel good legislation but in reality is about punishing innovation and protecting union dues. Its target is one non-union grocer which utilizes an assisted checkout system as its primary form of finalizing customer sales."

Of course, supporters of the bill, which include the popular Mother's Against Drunk Driving (MADD) organization, think it's much more than "feel good" legislation.

The non-union grocer Fong is referring to is Tesco's Fresh & Easy Neighborhood Market, which offers self-service checkout only in its 159 stores, including the 98 in California. The other stores are in Metropolitan Las Vegas, Nevada (27 units) and Metro Phoenix, Arizona (34 stores.)

When the first version of AB 1060 was introduced by Assemblyman Hector De La Torre (D-South Gate), who's also the author of AB 1060, into the California State Legislature in 2008 as AB 523, Fresh & Easy Buzz named the legislation the "Tesco Fresh & Easy Law" because if it does become law, Fresh & Easy Neighborhood Market would be the only grocery chain in California that would be significantly affected by it since it's the only chain we're aware of that offers self-service checkout only. A number of other chains offer self-service checkout but do so as an option, along with having full-service checkout, in the stores. The fact CGA's Fong singled out the one grocer reinforces our point.

In using the term "assisted checkout," CGA president Fong is using the term Tesco's Fresh & Easy uses, because although checkout in its stores is self-service, a store clerk will assist customers with the process if it's requested.

Tesco's Fresh & Easy is a member of the grocer's association, which is headquartered in Sacramento.

Assemblyman De La Torre, the bill's author, has yet to publicly comment or issue a statement on the passage of AB 1060 in the State Senate.

Tesco's Fresh & Easy hasn't publicly commented on the legislation's passage in the State Senate yet either.

Meanwhile, Ronald Fong of the California Grocer's Association is one of the few voices so far urging Governor Schwarzenegger to veto the self-service checkout alcoholic beverage sales ban legislation.

"Current law places a grocer’s alcoholic sales license in jeopardy if inappropriate sales are identified through either the assisted [self-service] or traditional [full-service] checkout options," Fong says in asking the Governor to veto AB 1060. "Losing this license would seriously impact a retailer’s business. No retailer would put themselves in that situation," he added.

Further, Fong says: "Assisted [self-service] checkouts contain appropriate safety protocol including the system locking when any age-restricted product is scanned, requiring a clerk to verify age and sobriety, and when even slight variations in weight of product scanned and product bagged are detected. Grocers also utilize additional means to prevent theft or inappropriate access including security cameras, customer interaction throughout the shopping experience, staff training, strict inventory control protocols and the placement of both products and checkout stations themselves. California grocers take seriously their responsibility to ensure that only those individuals legally entitled to purchase alcohol do so in grocery stores. CGA fully supports efforts of the state’s regulatory agency to enforce existing laws regarding sales of alcohol. We encourage Governor Schwarzenegger to veto this unnecessary legislation," Fong concludes.

Our August 15, 2010 story [Bill to Ban Alcoholic Beverage Sales at Self-Service Checkouts Would End 'Self-Service Only' at California Fresh & Easy Neighborhood Market Stores] detailed two recent studies that supporters of AB 1060 used to help gain passage of the bill in the State Senate. Both of those studies question the argument that self-service checkout offers ample protection (Fong of the CGA's argument in his statement) in terms of preventing minors from being able to purchase alcoholic beverage items using the self-serve systems.

Apparently a majority of the California State Senate agreed with those and other arguments put forth by the legislation's supporters.

Now, however, it's all up to the Governor, who although a Republican is known for taking non-traditionally Republican positions, like his support for AB 1998, the single-use plastic carrier bag ban legislation currently in the Senate, which is also supported by the grocers' association.

For Tesco's Fresh & Easy Neighborhood Market, the Governor's decision is crucial. If the bill becomes law, it will mean at a minimum Fresh & Easy will have to have one full-service checkout lane in each of its stores - which we have said for nearly three years it should have anyway from a smart retail operations standpoint. The grocery chain doesn't want to do this because it thinks full self, or assisted, checkout is key to its success and ability to reduce labor costs extensively. Having self-service-only also is a key provision in avoiding unionization for Fresh & Easy.

Who would have though when Tesco first came to America in 2006 and decided to offer self-service checkout-only in its California, Nevada and Arizona Fresh & Easy Neighborhood Market stores - which is something it does in just one store, a Tesco Express unit, in its United Kingdom home base - the decision as to whether or not the grocer keeps that self-service-only system in its Fresh & Easy stores would end up being decided by a former world champion bodybuilder from Austria, turned Hollywood mega-movie star, turned Governor of California, named Arnold Schwarzenegger?

Just last week a teen bought alcohol using a self service checkout at a Save Mart in Salinas.

You can't purchase cigaretts at self-service checkouts in California. Vending machines are also now illegal. Seems logical that the same should be the case for alcoholic beverages. Most stores have signs that say "if you are under 30 be prepared to show ID." As far as I know the workers at the Fresh & Easy stores don't ask for Id that way with the self service.