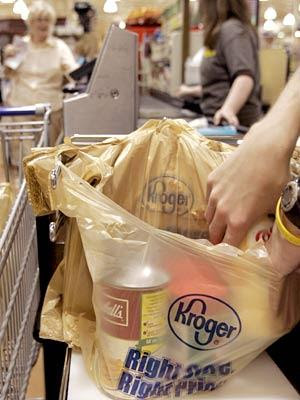 AB 1998, the state legislative bill that would have banned single-use plastic carrier bags in California's grocery stores, retail stores over 10,000 square-feet with pharmacies (in 2012), and convenience stores (in 2013), has failed in the California State Senate.

The vote was 21 members against and 14 in favor of the bill.

The final vote against the plastic bag ban came about 25 minutes before 12 am, which is when the California State Senate is set to adjourn its current legislative session.

As a result of the bill's defeat, California grocery stores will be able to continue to offer single-use plastic carrier bags in their stores, along with paper grocery sacks, accept in city's like San Francisco which have municipal bans against the thin plastic carrier bags.

Fresh & Easy Buzz predicts the failure of AB 1998 to pass will open up the floodgates for city and county governments in California to enact single-use plastic carrier bag ban laws.

For example, the city of Santa Monica in Southern California plans to go forward with its proposed plastic bag ban legislation, which it put on hold pending tonight's vote in the California State Senate, a spokesperson for the city told us earlier this week.

Manhattan Beach, California, which has been in court over its plastic bag ban law for a couple years now, said this week it will continue to fight in court against the American Chemistry Council, which sued the city in 2009 over the law, to enact the law if AB 1998 fails, as it has.

Other California cities considering single-use plastic bag ban laws but put them on hold pending the vote on AB 1998 include Berkeley and Davis, in Northern California, and Los Angeles in the southland, among others.

The California Grocers Association (CGA) supported AB 1998 for just this reason - in order to prevent a patchwork quilt of local bag ban and bag fee laws from occurring.

Ironically, we think the publicity generated by the fight over AB 1998 by supporters and opponents, led by the American Chemistry Council, which represents plastic bag-makers and other companies in the chemical industry, is actually going to serve as a catalyst for cities and counties, many who not only wouldn't have proposed or passed local bans had AB 1998 passed, but also might not have done so at all were it not for the huge amount of attention the legislation has received over the last few months in California.

For the state's grocers, and its trade association, the CGA, this means they will have to decide - and if they decide in the affirmative will have to spend significant time and money - which of the numerous local single-use plastic bag ban (or bag fee) pieces of legislation they will fight, or if they will fight any of them.

Meanwhile, the failure of AB 1998 to pass tonight, despite a number of amendments made to the bill at the last minute in an attempt to gain passage, likely means the appetite in the state legislature to propose and push a similar statewide bill next year is going to be minimal.

We will be offering further analysis on the issue, including the impact of the legislation's failure to pass on Tesco's Fresh & Easy Neighborhood Market, in an upcoming piece.

See the related stories below for details and perspective:

August 31, 2010: It's Down to the Wire in California State Senate For Possible First-in-the-Nation Statewide Single-Use Plastic Bag Ban

August 23, 2010: California's Battle to Ban the Plastic Bag Heats Up in Sacramento: Author of Legislation Says the Reports of its Death Are Greatly Exaggerated

August 20, 2010: Single-Use Plastic Carrier Bag Ban Bill AB 1998 Could Be in Difficulty of Passing in the California State Senate

July 20, 2010: California's First-in-the-Nation Plastic Carrier Bag Ban Legislation Looks to Be On its Way to Victory

June 19, 2010: 'Paper or Plastic' Likely to Be Replaced By 'Reusable or Paper' (For a Fee) in California Grocery Stores

[Readers: Fresh & Easy Buzz has been reporting on, writing about, and offering analysis and opinion on the single-use plastic carrier bag, reusable bag, and related topics and issues since early 2008. Click here, here, here and here to read a selection of those posts.]
Posted by Fresh & Easy Buzz at 11:36 PM