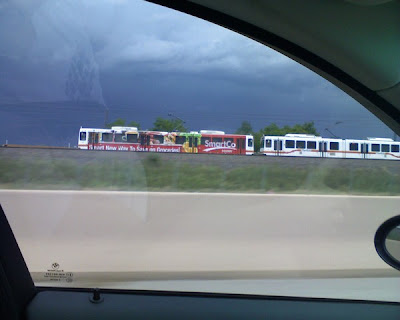 One of the numerous ways Smart & Final is advertising and promoting its SmartCo Foods chain launch in Metropolitan Denver, Colorado is with the mobile billboard seen above. In this photograph taken from a moving car, you can see the SmartCo Foods logo wrapped around two of the Denver Regional Light Rail System's cars. The "SmartCo Foods Train Car" is garnering lots of impressions - both of the general sort and of the kind referred to in the advertising business. [Photo credit: Cass Jupiter for Fresh & Easy Buzz.]

Southern California-based Smart & Final isn't letting any dust gather on the thousands of new grocery aprons it purchased earlier this year for the employees of it's first five SmartCo Foods stores, which are set to open in Metropolitan Denver, Colorado this year.

Today, less than three weeks after the opening of its first SmartCo Foods unit - a 57,000 square-foot combination supermarket, warehouse format and farmers market-style store - at 1442 South Parker Road in Denver, Colorado, Smart & Final opened the doors to its second unit, a 41,000 square-foot market in the Denver suburb of Aurora. The store is located in the Chambers Place Shopping Center in Aurora, at 5141 Chambers Road (at East Florida Avenue).

The other three initial SmartCo Foods stores - Smart & Final plans to open a total of 20-25 of the markets in Metro Denver over the next few years - are set to open before the end of the summer, according to our sources.

The locations of the three other Metro Denver stores are: 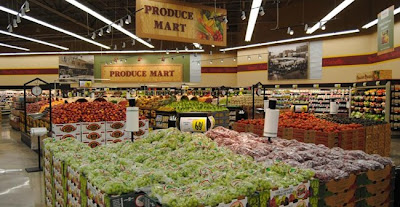 SmartCo Foods takes its inspiration from two formats Smart & Final operates - it's Smart & Final banner non-membership warehouse stores and its Henry's Farmers Market chain, along with including traditional supermarket elements to round out the three-part hybrid format.

Like it does with Henry's Farmers Market chain (based in Southern California), Smart & Final is operating the SmartCo Foods chain in a fairly independent manner. The retailer has set up a SmartCo division in Metro Denver, has an individualized website, and is marketing and promoting SmartCo as an autonomous chain in the market.

See our two previous stories on SmartCo Foods linked below for details:

140-year-old, City of Commerce, California-headquartered Smart & Final is aggressively advertising and promoting its SmartCo Foods chain launch in Metropolitan Denver. Its using billboard and transit vehicle advertising (see the photo at the top of the story), a focused public relations campaign and social media, along with conducting a full-court-press in-store special events program, featuring promos like a visit by the Denver Broncos Cheerleaders to the Denver store a couple weeks ago, free grocery bag give-aways, and loss leader item promotions designed to drive shoppers into the new stores.

For example, among the hot item promotions being offered at the two SmartCo Foods stores this week include:

Sweet, fresh white corn at 5 ears for $1.00; chicken leg quarters at 48 cents per pound; ground beef at $1.79 pound; ready-to-eat whole rotisserie chickens at $4.88 each; 24 pack canned Pepsi at $5.99; quart jars of Best Foods Mayo at $2.69; and numerous other items across all categories. You can see the current SmartCo Foods advertising circular here.

As we reported on June 28, Smart & Final plans to open SmartCo stores in Arizona and California before the end of this year.

If the retailer promotes the SmartCo launch in the two states as aggressively as it's doing in Metro Denver - and we're told it will - the openings should generate considerable excitement.

The opening of SmartCo stores in California and Arizona will add an additional layer to two already hyper-competitive states when it comes to the retailing of food and groceries.

Meanwhile though, Smart & Final is concentrating on opening its other three SmartCo Foods stores in Metro Denver - and adding to the growing competition in the Rocky Mountain state and mile-high Metropolitan market region.