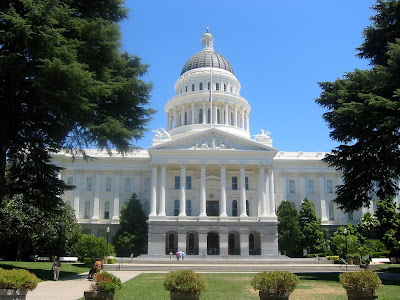 Today is the last day of the current session for the California State Legislature.

Among the pieces of legislation the California State Senate (and California State Assembly) is dealing with right now inside the ornate capital building in Sacramento pictured at top, is a slightly major one: The Golden State's elected leaders have to date failed to pass a state budget. The budget is now over 60 days late, in fact.

But right now (7 pm pacific time), the issue that's hot and heavy in the California State Senate, which is set to adjourn in five hours at 12 am, is AB 1998, the bill that if passed and signed by the Governor will ban, beginning in 2012, the use of thin, single-use plastic carrier bags in California's grocery stores, retail stores over 10,000 square-feet with pharmacies, and (in 2013) in convenience stores and small grocery markets.

California Governor Arnold Schwarzenegger supports AB 1998 and has said he will sign it if the California State Senate passes it.

The California Grocers Association (CGA), which is the trade group for California's chain and independent grocers, supports the single-use plastic bag ban bill, as we've previously reported. The legislation allows grocers to sell paper grocery sacks for a minimum of five cents each. The paper bags must be made out of 40% recycled paper. The law would also permit stores to offer thicker plastic shopping bags, as long as they are deemed reusable. Additionally, AB 1998 upholds the current legal requirement that grocers sell reusable shopping bags in their stores.

The bill has been amended by its author, Assemblywoman Julia Brownley, D-Santa Monica, in an attempt to gain the needed votes from California State Senate members who've been on the fence.

Most significantly, Brownley and her supporters in the legislature removed a provision of AB 1998 that would have required grocers to charge a minimum of five cents each for paper grocery bags. The proceeds of the bag sales, reagrdless of the price charged by grocers and other retailers, would have gone entirely to the retailers.

Under the revised bill, retailers would be allowed to charge only what it costs them to buy paper bags. Additionally, grocers would be required to provide free paper bags to shoppers who rely on government assistance.

If AB 1998 passes the Senate before 12 am tonight, the California State Assembly will have to approve the amendments before sending it to Governor Arnold Schwarzenegger for his signature.

The amendments though aren't proving to be a guarantee of the bag ban legislation's passing in the California State Senate.

A short while ago, opponents of the bill made a procedural move, which sent AB 1998 back to the Senate Appropriations Committee. This is law-making in real-time folks - which is similar to watching sausage being made but without having to wear a hard hat, although the safety hats should be required on the California State Senate floor right now. Supporters of the bill are at present trying to get the legislation out of committee and back onto the floor of the full California State Senate for a vote.

Lobbyists for both sides have been offering perks to the pols for weeks. As we write this many "advocates" are elbowing senate members, trying to persuade the undecided to vote their respective ways, adding sweeteners like campaign donations and more to the pot if they do so.

We're watching and reporting on the process closely at our @FreshNEasyBuzz Twitter.com feed. You can view it - and our "real time" tweets on the process - at the screen on the right, as well as at our Twitter feed.

The California State Senate has five hours to vote on the plastic bag ban bill.

If no vote is taken before thes stroke of midnight, when the current legislative session ends, the bill essentially goes away. In other words, a new bill will have to be reintroduced in the next legislative session and make its way once again through all of the relevant committees in the California State Assembly and State Senate.

August 23, 2010: California's Battle to Ban the Plastic Bag Heats Up in Sacramento: Author of Legislation Says the Reports of its Death Are Greatly Exaggerated

August 20, 2010: Single-Use Plastic Carrier Bag Ban Bill AB 1998 Could Be in Difficulty of Passing in the California State Senate

July 20, 2010: California's First-in-the-Nation Plastic Carrier Bag Ban Legislation Looks to Be On its Way to Victory

June 19, 2010: 'Paper or Plastic' Likely to Be Replaced By 'Reusable or Paper' (For a Fee) in California Grocery Stores

[Readers: Fresh & Easy Buzz has been reporting on, writing about, and offering analysis and opinion on the single-use plastic carrier bag, reusable bag, and related topics and issues since early 2008. Click here, here, here and here to read a selection of those posts.]
Posted by Fresh & Easy Buzz at 7:01 PM

Banning may be an extreme usage of word. Just follow what ALDI does - charge more for plastic, a little for paper, nothing if using your own recycling bags. Rather than charge 10 cents for plastic, how about $1.00 for each plastic bag, yeah!

How about those faces of Walmart shoppers? Priceless. Trickle-down economy at work.