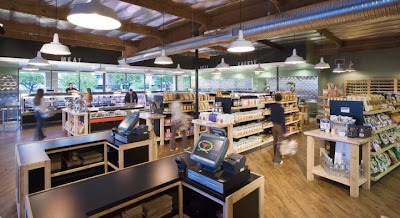 Inside The Meat House's Costa Mesa, California store, which opened in January 2010. Click on the photo to enlarge it. You can view additional photographs of the Costa Mesa store here.

A fast-growing, small-format (the stores average 3,500-4,500 square-feet) butcher shop and grocer new to the Western U.S. and California has plans to open numerous stores in Southern California over the next few years, along with elsewhere in the U.S., Fresh & Easy Buzz has learned.
The grocer is The Meat House, which opened its first store in Portsmouth, New Hampshire in 2003, just a few months after it was founded in 2002 by partners Justin Rosberg, a former Bear Stearns investment banker, and Jason Parent, a restaurant industry veteran. The retailer is headquartered in Portsmouth. Rosenberg holds the title of CEO. Parent is president.
The Meat House, which currently has 25 stores in eight states - New Hampshire (8 units), Massachusetts (7), Maine (4), North Carolina (2), New York (1), Connecticut (1), Texas (1) and Southern California (1) - opened its first California store in Costa Mesa in January of this year.
The retailer operates on a mixed corporate ownership-franchise basis, although it doesn't grant any single-store franchises. Instead, any franchise holder excepted must open a minimum of four stores in a given area. The Costa Mesa store (at 103 East 17th Street) is one of those franchise operations, owned by partners Brian Smith and Robert Hagopian. Both live in nearby Laguna Beach.
About 60% of the current 26 stores are corporate-owned. The food retailer only created its franchise option in February of this year. It says it currently has territory agreements with franchise partners for at least 125 new stores in 11 states.
Two new Southern California stores - with more to come
The Meat House is preparing to open two more stores in Southern California - in Mission Viejo and in Brea, our source at the company tells us. Plans are to open both stores before the end of this year.
Additionally, numerous other The Meat House stores are on the drawing board for Southern California over the next few years. 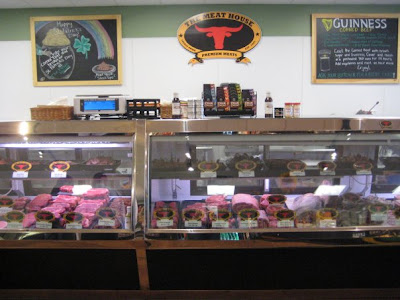 More than a butcher shop: A small-format grocer