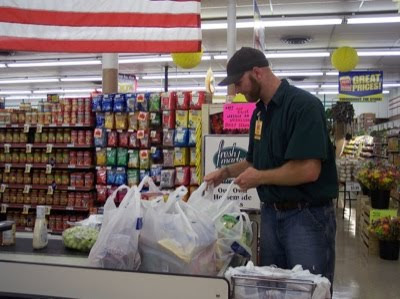 California's AB 1998, the legislative bill that would ban single-use plastic carrier bags in the Golden State's grocery markets, retail stores over 10,000 square-feet with pharmacies and (in 2013) convenience stores, could be in trouble in the State Senate.

AB 1998 allows grocers and the other retailers to offer shoppers paper grocery bags at a cost of at least five cents each. Grocers in California are already required to offer reusable shopping bags for sale in their stores. AB 1998 maintains that requirement.

In this story on August 16, we reported that the Senate Appropriations Committee had voted on AB 1998. That's incorrect. The committee failed to reach a vote on the bill by its reporting deadline of August 13, so the chairman referred AB 1998 to the Senate Rules Committee. As of today, the bill is pending in the Rules Committee.

The full California State Senate must vote on AB 1998 by August 31, when the legislative body adjourns. And because the bill wasn't approved by the Senate Appropriations Committee, it now must receive a yes vote by two-thirds of the State Senators in order to pass. Previously all that was needed for the legislation to pass was a simple majority.

As we've reported previously, the bill to ban the single-use plastic carrier bags has the support of a majority of the members of the California State Senate. However, now that the vote will require a two-thirds majority rather than a simple majority, what previously was considered an easy victory for AB 1998 is now in question.

Opponents of the bag ban, who've been relatively inactive of late compared to the bill's supporters, today seized on the change in the legislative process in the Senate, which now requires the two-thirds majority vote in order for the plastic bag ban legislation to pass and go to the Governor for his signature.

The main opposition group, which calls itself Stop the Bag Police [http://www.stopthebagpolice.com/] today said: "Opposition to AB 1998, the so-called 'bag ban bill,' is growing rapidly across the state. Hundreds of businesses, many of them small grocers and retailers, have joined forces with manufacturing associations, chambers of commerce and plastic bag makers statewide to send a clear message to Sacramento: start focusing on the real problems facing Californians."

The coalition's main argument against the single-use plastic bag ban is summed up in this statement from the group's spokesperson: "In its current iteration, AB 1998 would prohibit large grocers, drug stores, food marts and convenience stores from providing their customers free plastic bags and require a minimum five-cent fee on paper bags. The Senate Appropriations Committee determined that AB 1998 would require $2 million in new state costs to fund a new 'bag police' bureaucracy. The fees collected from paper bags would be pocketed by grocers and would not fund the infrastructure required by the bill. The passage of AB 1998 would result in the elimination of hundreds of California-based plastic bag manufacturing jobs and would dismantle a young but growing plastic bag recycling infrastructure."

Stop the Bag Police says it currently has nearly 500 businesses and organizations that oppose AB 1998.

Among those opposed to the legislation include independent grocers like Northern California-based Fiesta Foods and Food Fair Market, the California Hispanic Chamber of Commerce, the Long Beach, California Black Chamber of Commerce, the American Chemistry Council and others. You can view a full list of the businesses and organizations opposed to AB 1998 at [http://www.stopthebagpolice.com/.]

The American Chemistry Council which among other activities represents the manufacturers of single-use plastic carrier bags, is heading up the opposition to the bill.

Key to the single-use plastic carrier bag ban legislation's passing is meeting the August 31 deadline for a (now two-thirds) vote by the full California State Senate. If the bill isn't voted on by August 31, it goes away for this legislative session, which ends on August 31, and must be reintroduced all over again in next year's session.

Both meeting that deadline and obtaining the two-thirds majority vote now required to pass AB 1998 is no longer that "sure thing" for supporters of the single-use plastic carrier bag ban legislation, which includes the California Grocers Association, (CGA) the trade organization for California's chain and independent grocers.

Tesco's Fresh & Easy Neighborhood Market, which is a member of the CGA, is in favor of AB 1998 by virtue of its membership in the trade group, even though the grocer offers only free single-use plastic carrier bags and no paper bag offerings in its 159 fresh food and grocery stores, 98 units of which are located in California. Fresh & Easy offers a variety of reusable bags in its stores, ranging from an inexpensive clear synthetic bag it calls a 'bag for life,' which sells for 20 cents each, to various varieties of cloth and canvas bags, with a starting price of one dollar.

The California State Senate's legislative clock is ticking for both the supporters and opponents of the single-use plastic bag ban bill.

July 20, 2010: California's First-in-the-Nation Plastic Carrier Bag Ban Legislation Looks to Be On its Way to Victory.

June 19, 2010: 'Paper or Plastic' Likeley to Be Replaced By 'Reusable or Paper' (For a Fee) in California Grocery Stores

[Readers: Fresh & Easy Buzz has been reporting on, writing about, and offering analysis and opinion on the single-use plastic carrier bag, reusable bag, and related topics and issues since early 2008. Click here, here, here and here to read a selection of those posts.]
Posted by Fresh & Easy Buzz at 3:34 PM