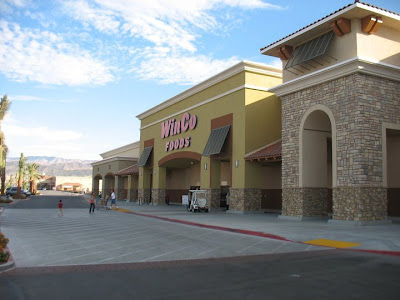 "We know (although they haven't confirmed it) that WinCo Foods is looking at multiple sites for stores in Metro Phoenix, and may already have decided on at least two additional locations, based on information from our sources. As a result, even if the neighborhood group is successful in getting the project killed when the Glendale City Council votes on it next month, the setback isn't going to stop Winco from entering the Metro Phoenix, Arizona market, with its mega-food and grocery stores."

In the piece we also noted the Arizona Republic newspaper reported that day on one for sure planned WinCo store site in Glendale, Arizona, a Phoenix suburb.

Today, Arizona commercial real estate executive Ed Beeh, the executive vice president of SRS Real Estate Partners in Phoenix, which is representing Winco Foods in the market, went on the record with the Phoenix Business Journal, sharing with the publication a second (in addition to the one reported on by the Arizona Republic, mentioned in our April 27 story) specific proposed Winco store location. [The Phoenix Business Journal story.]

Beeh told the publication WinCo Foods has purchased a former Walmart site near Seventh Avenue and Bell Road in north Phoenix for one of its 90,000 -to- 1000,00 square foot discount mega-supermarkets. He didn't provide any additional information about that location though - or mention any others. (This is one of the two additional but not specifically named locations mentioned in our April 27 post.)

However, Greg Laing, a commercial real estate executive in Metro Phoenix, who's firm Phoenix Commercial Advisors represents the Arizona-based Sprouts Farmers Market grocery chain, told the publication he believes WinCo also has contracts on store sites at the southeast corner of Alma School Road and the San Tan Freeway in Chandler, and at the northwest corner of Pecos Road and the San Tan in Gilbert. Fresh & Easy Buzz knows Laing to be a straight-shooter in Arizona commercial real estate circles. Therefore, we put stock in what he is saying.

Both Chandler and Gilbert are in Metro Phoenix.

Tesco's Fresh & Easy Neighborhood Market has stores in both Chandler and Gilbert , as well as in Phoenix.

All of this information tracks with what we started hearing from sources - and have been reporting, first on our twitter.com feed early this year, and more recently on the blog: That Winco Foods has made a major commitment to the Metropolitan Phoenix, Arizona market, and plans to open multiple stores in the region.

As we've also noted, Winco is looking for numerous store sites in the market region. And by numerous, we mean additional future locations beyond those mentioned thus far. (It takes Winco some time, like it does Walmart, to build one of its mega stores.)

As we said in our April 27 piece, Winco Foods will be a game changer in Metro Phoenix once it has a number of stores up and running, particularly in the discount segment, but also overall in food and grocery retailing.

Winco also poses an interesting competitive challenge in the market to Walmart. In the food and grocery retail categories, the two chains have very similar positioning, merchandising and pricing strategies and policies.

Like Walmart, Winco is an everyday-low-price, rather than a high-low, operator.

In the various Western U.S. markets where Winco and Walmart compete, the Idaho-based, employee-owned chain regularly does market basket price comparisons against its competitors, including Walmart, and then publishes the results, claiming to beat the brawny big box retailer from Bentonville every time.

WinCo Foods, which bills itself as "The Supermarket Low Price Leader," opened three new stores today - two units in the Utah cities of Ogden and Orem, and one in Sumner, Washington.
Walmart is the market share leader in Metro Phoenix and all of Arizona, however. And Winco will have its competitive legs challenged by the mega-chain in the market.

WinCo Foods also will be challenged by Kroger's Fry's (number two market share in Metro Phoenix) and Safeway (third) particularly, but also the numerous other food and grocery retailers with stores in Metro Phoenix, like Target, Costco, Walmart's Sam's Club, Bashas' and a host of others, including Tesco's Fresh & Easy, which has been putting a focus on price and value since late 2008-early 2009, to the present.

Most of these grocers already compete with WinCo Foods in one of the six western states - Washington, Idaho, California, Nevada, Oregon and Utah - where the supermarket chain has its current 74 stores. So they have a good idea what's coming. And you can bet they're concerned - and worried.

Walmart is really no competition for Winco when it comes to price and selection. Winco has a bulk foods dept that wally world doesn't . When
Winco does come into the Az market, they will dominate. and by the way they don't consider themselves a "mega store".

i am from WA and miss my WInco!!! Cannot wait for them to get here!

I shopped at Winco in WA and am very excited about them coming to Phoenix. In fact, I saw a Winco sign at 7th Ave and Bell Rd last weekend. Can't wait. Love their bulk department.

Thanks for your comment anonymous - Would you send me an email at freshneasybuzz@yahoo.com please, want to ask you a question about the 7th and Bell location, and will do so in the reply email when I get your address. You can just put 'Winco Arizona' in the subject line and a simple note it's you. Would appreciate it.


Anonymous said...
I shopped at Winco in WA and am very excited about them coming to Phoenix. In fact, I saw a Winco sign at 7th Ave and Bell Rd last weekend. Can't wait. Love their bulk department.

I saw a WinCo sign on power rd just north of
US 60. It looks like it will be in the location where Costco used to be.

I got excited when I heard about Winco coming to phx. but too far for me to travel to it's new store, so sad!!!! I used to shop in Clackamas, Or. faithfully for yrs. and was so sad that I had to leave my favorit store, now that you are opening up so far away from me I will have to wait, maybe you will be coming to Avondale, PLEASE!!!!

I am from Avondale and am not familar with WinCo but I am excited to check it out but if they take off there are plenty of empty spaces for them to open. i would even become a small time investor , but unfourtunitly I do mean small investor. Can't wait

Please, please come to Avendale. I use to live in Clackamas, Or. and Winco was the only store I shopped at and miss it soooo much here in AZ. Thanks for coming, Donna from Oregon