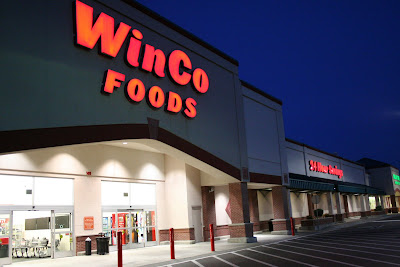 Early this year we posted a "tweet" on our Twitter.com site, in which we predicted Idaho-based grocery chain WinCo Foods was planning to enter the Arizona market, starting with a few stores - the first opening likely in 2011 - in the Metropolitan Phoenix market region.

Our knowledge came as the result of information we first started receiving from sources in December 2009 that WinCo had set its sights on the hyper-competitive Metro Phoenix market.

Additionally, before posting our tweet, we checked in with a source at WinCo Foods via e-mail. And although the source said they couldn't "confirm" WinCo was "planning" to open one or more stores in the region, they said they could tell us "WinCo is very interested in getting into the Arizona market," which is about as good of a non-confirmation, confirmation as you can get.

Today, the Arizona Republic offers about as good of a non-WinCo Foods' spokesperson confirmation as a publication can get, in a story by staff writer Rebekah L. Sanders.

In the story, "Plan to put grocer at Glendale farm site irks neighbors," Ms. Sanders reports that a group of neighborhood residents in a semi-rural part of the Phoenix suburb of Glendale, Arizona, are objecting to a developer, and WinCo Foods', plans to locate one of the big (average 90,000 -to- 100,000 square foot) WinCo discount food and grocery stores on a vacant plot of land where the developer is planning a shopping center featuring the supermarket, four medium sized retail buildings, and 13 smaller shops. [Click here to read the Arizona Republic story.]

The project-area near Glendale is set to become a food and grocery retailing hot corner.

For example, Walmart is building a new (40,000 -to- 45,000 square foot) Neighborhood Market supermarket about one mile away.

Additionally, the CVS drug chain is building a new store nearby. CVS sells a fairly healthy selection of packaged food and grocery products, beverages (adult and non-adult) and perishables items in its drug stores. It also devotes about half of its weekly 12-page advertising circular to the promotion of consumables and non-foods packaged goods.

Winco could be in for a fight from the neighborhood group in terms of gaining approval for its first Metro Phoenix store in Glendale, although the two members of the City Council, who's districts border the planned center, support the project, according to the Arizona Republic story. A similar group of neighborhood residents was successful in preventing retailer Target from building a 100,000-plus square foot store in the area a few years ago.

However, this was before Arizona's economy went into free-fall in 2008. With unemployment in the area at about 10%, it's going to be difficult for the City Council to say no to the project, particularly since WinCo employs about 300-400 workers in a single store. Those are 300 badly needed new jobs in the Glendale area. The odds: We put our money on approval by the council, perhaps with some minor changes to the current plan for the center.

We know (although they haven't confirmed it) that WinCo Foods is looking at multiple sites for stores in Metro Phoenix, and may already have decided on at least two additional locations, based on information from our sources. As a result, even if the neighborhood group is successful in getting the project killed when the Glendale City Council votes on it next month, the setback isn't going to stop Winco from entering the Metro Phoenix, Arizona market, with its mega-food and grocery stores.

WinCo Foods is a majority employee-owned company. In fact, just last week WinCo said it bought out the 10% of the company - the only part of Winco Foods owned by an outside investor - held by Seattle, Washington-based investment firm Endeavour Capital Management. WinCo said its employees now own 87% of the company, through its ESOP (employee stock ownership plan). The remaining 12% is privately-held by WinCo Foods under a different ownership structure.

WinCo is non-union, and since it's majority employee-owned - and the employee-owners have said no to being unionized more than once - we doubt that status will change in the foreseeable future, if ever, even though the United Food And Commercial Workers union (UFCW) has been trying to organize the owner-employees for many years.

WinCo puts the 'ultra' in 'hyper-competitive'

Metropolitan Phoenix, Arizona is arguably the most competitive food and grocery retailing market in the U.S. In our analysis it's not arguable.

WinCo Foods, which has 71 stores located in six western states - Washington, Idaho, California, Nevada, Oregon and Utah, and has opened about eight new mega-stores in the last 15 months - is one of the most competitive food and grocery retailing chains in the United States, particularly in the price-impact segment.

It's stores, which devote the majority of the 90,000 -to- 100,000 square feet to consumable and non-foods packaged goods - but not electronics, clothing and other general merchandise like Walmart and Target do in their mega-stores - are also destination markets, meaning that on average customers will come from many miles away to shop at them. This is one of the reasons why, with just 71 stores, WinCo has estimated annual sales of $4-$4.5 billion.

Once it gets just a handful of stores opened in Metropolitan Phoenix, we predict WinCo will begin to become a game-changer in the market. It will not only take sales from nearby - and not so nearby - Walmart Supercenters and Neighborhood Market supermarkets, but also from conventional supermarket chains like Kroger's Fry's, Safeway, Albertsons, Bashas', and even Tesco's Fresh & Easy and other grocers in the market.

This isn't to say Arizona and Metro Phoenix - and particularly market share leader Walmart -will be by any means be easy pickings for WinCo Foods.

And in terms of putting market share numbers up on the board, it will take numerous WinCo stores open and operating in the market before that can happen. Rather, in our analysis, WinCo will find, once it opens in the region, that the Metropolitan Phoenix food and grocery retailing market will be the most competitive - actually hyper-competitive - of all the markets it's in to date.

[Competitive related posts here. Past reports & analysis of the hyper-competitive Metro Phoenix, Arizona market here, here and here . Click the "older posts," "new posts" links at the bottom of each page at those above links as well.]
Posted by Fresh & Easy Buzz at 6:08 PM

I'm in the Fresno, California area and work in grocery sales. Overall Winco has the lowest prices of all the stores here. That includes Walmart, Safeway, Save Mart and the Fresh & Easy's. Walmart and Save Mart's Food Maxx stores are close but Winco wins.