Competitor News: 'Grocer-Gone-Wild:' Arizona's Fry's and its 'Bring it On' 'Take All Competitors' (Including Tesco's Fresh & Easy) Store Coupon Move 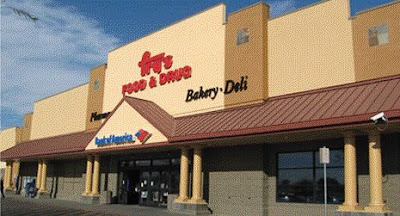 No season of the year is more important to food and grocery retailers than the one that begins about two weeks before the Thanksgiving holiday in November, and runs on through Christmas, right up to New Years. U.S. shoppers buy big at the grocery store during this nearly two month time period, including buying types and varieties of food and grocery products, including higher-end items, they don't buy during the other 10 months of the year. It's a sales bonanza season for grocers.

The fall holiday food retailing season for grocers also is one of the most competitive in the U.S. supermarket industry. That makes sense after all, with shoppers buying so much more for the holidays than normal, each grocery chain wants to be the one that gets the biggest share of that spending. Therefore, the competition is fierce among grocers for shopper dollars in November-December, even more so than it is the rest of the year.

And nowhere in the U.S. was the recently-ended Thanksgiving-Christmas-New Years 2008 food and grocery retailing season more competitive than it was in Southern California, southern Nevada and Arizona, where Tesco's Fresh & Easy Neighborhood Market operates its 110 combination grocery and fresh foods markets.

Among these three states and market regions, the Phoenix, Arizona Metropolitan market region is arguably the most competitive.

For example, The United States' four leading food-grocery retailers (in order of annual sales of food and grocery products) -- Wal-Mart, Costco, Kroger Co. (Fry's and Smith's), Supervalu, Inc. (Albertsons) and Safeway Stores, Inc. -- all have numerous stores in the Arizona market. There's also Arizona-based powerhouse supermarket chain Bashas, which as "the local guy" has about 160 supermarkets in its home state. Then there's Trader Joe's, the popular hybrid natural foods chains Sprouts Farmers Market and Sunflower Farmers Market, natural superstore chain Whole Foods Market, numerous independent supermarkets, many ethnic grocers (the state has about a 40% Hispanic population) -- and of course Tesco's Fresh & Easy, which has over 30 stores in the region, with more on the way.

When it comes to the use of store discount coupons -- like the $5 off purchases of $20 or more, the $6 off of purchases of $30 or more, and now the $10 off purchases of $50 or more that Tesco's Fresh & Easy has used in the Phoenix Metro market since its first stores opened there in the fall of 2007 -- the grocery and fresh foods chain has had that particular market niche (offering the store coupons) mostly to itself.

A couple of the chains in the market sometimes distribute such coupons -- but only as a rare promotional tool. For example, as we wrote in this piece yesterday, Safeway distributed a $10 off purchases of $50 or more store coupon, good for just three days, in its supplemental advertising circular on Super Bowl Sunday. But Fresh & Easy is the King of such discount store coupon distribution in Metro Phoenix, and the only chain that regularly offers the coupons to shoppers.

However, and we aren't even sure if Tesco is aware of this, But the Kroger Co.-owned Fry's supermarket chain in Arizona mounted what can be best described as a "take all competitors'" strategic store coupon strategy for most of November and December, 2008, as a way to up the anti in the coupon derby in the very competitive Arizona market.

For most of the November and December 2008 holiday selling period, Fry's honored every one of its competitors' store coupons and manufacturers' "chain-specific" "in-ad" and retailer Web site coupons in its stores, including all of the $5 off and $6 off deep-discount store coupons issued by Tesco's Fresh & Easy Neighborhood Market in the Arizona market.

That's right, Fresh & Easy wasn't the only chain, or stores, where shoppers could use the "retailer-specific" $5 off and $6 off store coupons issued by Tesco's Fresh & Easy. Fry's stores welcomed the Fresh & Easy store coupons, along with every other type of coupon from every food retailing competitor in Arizona, during the super-competitive food and grocery retailing months of November and December, 2008.

Instead of issuing its own similar deep discount store coupons, Fry's just said to shoppers -- 'We will take every coupon you have, regardless of which retailer issued it, in our stores.' That's what we mean by a "take all" store coupon strategy. "Bring it on" might also be an apt description of the promotion.

Fry's promoted the "take all competitor coupons" program in its stores, in its weekly advertising circular, and on its Web site in a selective fashion. A number of local consumer-published Blogs that focus on supermarket and manufacturers' coupons in Arizona also mentioned the "Fry's takes all competitors' coupons promotion" in November and December as well.

For example, this is what Arizona coupon maven Stephanie Ashcraft, who publishes her own Blog about Arizona coupon deals, Savvy Savings Tucson, told Fresh & Easy Buzz in December, 2008 about the Fry's "take all competitors'" coupon program: "The first time I went to use one of the Fresh & Easy Neighborhood Market $6 off $30 purchase coupons at Fry's they scanned it and it took off $1.10. I had the cashier look at the coupon and they took off the remaining 4.90 off the order. I've used the coupon several times over the last few months at Frys while they've had this deal running. It's great! I'm able to combine that coupon with all my manufacture coupons which makes this truly a "screaming deal." They take that coupon off first, then deduct all my other coupons."

Ms Ashcraft also appears regularly on Arizona television stations offering her coupon savings tips for Arizona consumers. She mentioned the Fry's "take all competitors'" coupon program during one or more of her TV appearances in November and December, 2008, in addition to posting about it on her Blog.

Note that in the quote above (in italics) that coupon maven and grocer store penny-pinching expert Stephanie Ashcraft mentions combining the Fresh & Easy store coupons with manufacturers' "cents off" coupons at Fry's in order to save even more money on her purchases. This isn't something shoppers can do at Tesco's Fresh & Easy markets because the grocery chain doesn't accept manufacturers' "cents off" coupons in the stores.

As a result of the program and the various forms of publicity about it in Arizona, Fry's redeemed numerous chain-specific product "cents off" coupons offered by its competitors, and also accepted many of the Fresh & Easy $5 off and $6 off deep-discount store coupons in its Arizona supermarkets in November and December, 2008, accepting the Tesco coupons as if Fry's issued them itself.

Manufacturers, particularly big ones like Proctor & Gamble, General Mills, Kraft and numerous others, work with retailers, especially big chains, to offer "chain or retailer-specific" product "cents off" coupons that are only good at a specific retailer's stores, such as good only at Wal-Mart, Safeway, ect. The chain then runs the coupon in its weekly advertising circular ("in-ad" coupon) and/or on its Web site. The manufacturers' even pay the retailer a hefty fee in return for the grocery chain running the manufacturer's coupon in its paper advertising circulars and on its Web site.

We recently talked to a Fry's executive who said (on condition we not print he or she's name) the chain will do the "take all" competitor coupon promotion again, accepting all competitor coupons, be they special in-ad specific item store coupons from the likes of Safeway, Bashas, Wal-Mart or Albertsons, or the deep discount store coupons offered by Tesco's Fresh & Easy (or any other retailers) -- that up until November and December of last year were good only at a Fresh & Easy Neighborhood Market store in Arizona. Fry's isn't announcing yet when it will do the promotion again, at least not to us or any other publication. But it will do so again. We are rather certain of that fact.

Meanwhile, the strategy of accepting all its competitors' coupons is a powerful one. (Also a potentially expensive one.) In a sense, for whatever period of time a supermarket chain does so, it can render all of its competitors' coupon-oriented promotions much weaker than they would be without such a defensive strategic move by a competing retailer like Fry's. And the bigger the chain (the more market share it has), the weaker it makes the competitors coupon efforts and programs.

Imagine, for example, if two big chains, say Fry's and Safeway, in a market like Arizona both took all competitors' coupons at the same time. That would make such coupon promotions from all the others even weaker, or perhaps make all such offensive moves moot for whatever period of time the two chains accepted the competitor coupons for.

As we said, we aren't sure if Tesco's Fresh & Easy knows, at least until now, that a competitor, Kroger Co.-owned Fry's, was redeeming its $5 off and $6 off store coupons for most of November and December of last year. But many Arizona shoppers knew, as Fry's took in some pretty big stacks of Fresh & Easy Neighborhood Market-issued store coupons during the nearly two month promotional period.

So you see, as we often suggest, just when you think the competition in food and grocery retailing in the Western U.S. has gotten about as hot as it can get, a grocery chain like Fry's in this particular case, steps in as it did in November-December, 2008 and turns that heat up just a notch more. And with the current recession getting worse, especially in California, Arizona, Nevada and most of the other western states, expect this competition to intensify.

In fact, we suspect it might not just be Kroger Co.-owned Fry's that decides to accept all competitors' coupons, including the Fresh & Easy deep discount store coupons, next time around. Another chain or two might join in the defensive action. And we suspect that "next time around" for taking all of its competitors' coupons will be fairly soon for Fry's. Stay tuned.
Posted by Fresh & Easy Buzz at 5:08 AM

Great article. I love when Fry's does this. Albertsons is also getting pretty aggressive.

Not sure if they are doing it after the event.