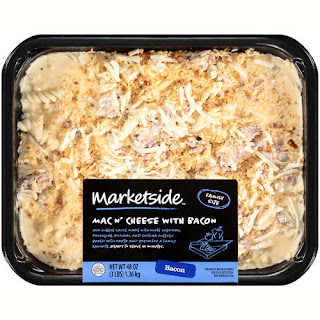 Walmart Stores, Inc. is adding additional fresh, prepared foods items to its Marketside fresh foods store brand, as we predicted it would in this January 9, 2010 piece: Walmart's 'marketside': What's 'In-Store' for 2010? 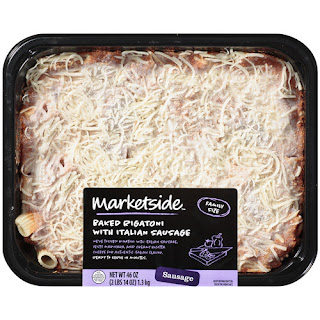 Fresh & Easy Buzz has located two items/SKUs in the new prepared entree line thus far: Marketside Macaroni & Cheese With Bacon, in a 3 pound package, and Baked Rigatoni with Italian Sausage, in a 46 ounce package. (The Rigatoni With Sausage entree is pictured above; the Mac and Cheese With Bacon is at the top.) 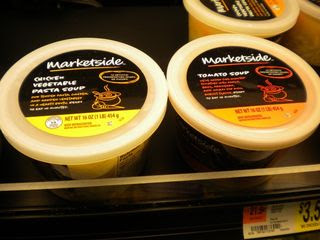 Additionally, Walmart has introduced a new line of ready-to-heat, refrigerated fresh soups (pictured above) under its Marketside brand.

The Marketside entrees and soups are similar to those marketed by Safeway (Signature Cafe store brand), Tesco's Fresh & Easy Neighborhood Market (fresh & easy brand) and a number of other U.S. food retailers. But the expansion by Walmart is significant from a competitive standpoint because the mega-retailer has thousands of U.S. stores in which it can sell the growing marketside fresh, prepared foods line

Walmart is in the process of launching the new Marketside fresh, prepared entree line and the fresh soup line in selected Supercenters and Neighborhood Market Supermarkets.

There will be additional items/varieties in the prepared entree line coming out soon, according to our sources and research.

The Marketside entrees and soups were originally created for Walmart's four small-format 'marketside by Walmart' fresh food and grocery stores located in the Metropolitan Phoenix, Arizona region, where the ready-to-heat fresh foods have been sold since the four stores opened in May 2008.

As we've reported and written about extensively, Walmart is using the 'marketside' stores as a laboratory for the development of its brand Marketside fresh foods program.

Walmart introduced its first Marketside branded fresh, prepared food item, a line of take-and-bake pizzas, to selected Supercenters and Neighborhood Market supermarkets last year. The pizzas were also developed at and are sold at the four Phoenix Metro region 'marketside by Walmart' stores.

Fresh & Easy Buzz reported in this December 21, 2009 piece - Wither Walmart's Small-Format 'marketside' Stores and Format? - that Walmart had replaced the Web site for its small-format 'marketside by Walmart' fresh food and grocery stores with a single page describing its new Marketside line of fresh foods.

We said this development signaled that Walmart was putting its primary emphasis regarding brand Marketside on the new fresh foods line rather than on additional 'marketside by Walmart' stores., which remains the case.

One of those predictions was that Walmart would soon be rolling out additional fresh, prepared foods items under its Marketside store brand.

Here's what we said (in italics below) in prediction two of the three:

"Walmart will introduce a few additional packaged fresh, prepared foods items (SKUs) under its 'marketside' brand in some of its Supercenters, discount format stores and Neighborhood Market supermarkets in 2010, following up on the 'marketside' prepared, take-and-bake pizza.

Walmart is doing just what we predicted it would.

Walmart will be launching additional fresh, prepared - and other fresh foods - under its Marketside store brand this year.

[Click here and here for a selection of past posts in Fresh & Easy Buzz about Walmart's 'marketside' retail format and stores.]

[Editor's Note: In the past, Walmart used all lower-case letters for 'marketside.' It still uses lower-case for its 'marketside by Walmart' stores. However, Walmart is using Marketside (with a capital M) for its Marketside store brand. Therefore, we will follow this convention.]
Posted by Fresh & Easy Buzz at 5:02 PM

This is all good looking product.

I'm sure you know about it since you've been writing about the changes to the marketside website since 2008-09. They now have the new marketside prepared foods and produce items you wrote about posted on www.marketside.com

Good to hear from you Mike. And thanks for your comment.

Yes, we are well aware of the addition of the items, along with the revamp, on/of marketside.com

They did it a bit ago. Not breaking news.

We mentioned it in this piece in case you didn't see it:

They don't have the salsa line a a couple others on the site at present.

But they've added the prepared entrees and new pre-packaged salad items we first reported on in our February 28, 2010 post:)

Regards. Thanks for your participation.

Does anyone know when Wal-Mart first introduced Marketside brand take and bake pizza in their discount stores/supercenters? Sounds like it was somewhere between July and November 2009. Thanks!

Your time horizon is pretty spot on. Believe it was about September, October.