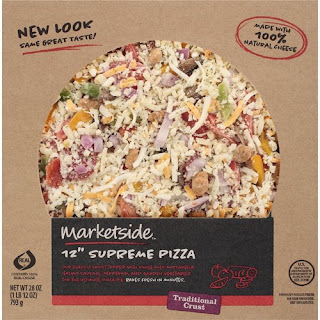 Walmart has now added its Marketside private brand fresh soups, which we reported on in February [Walmart Introducing New Ready-To-Heat Prepared Entrees, Fresh Soups Under its Marketside Brand], to its marketside.com Web site. There are eight varieties in the ready-to-heat soup line.

In addition, Walmart just-recently added its eight-item Marketside refrigerated take-and-bake pizza line (pictured at the top) to the site.
The pizzas were the very first item Walmart rolled out in its Marketside ready-to-heat and ready-to-eat, prepared foods line. It introduced the pizzas in selected stores in fall 2009. The refrigerated pizzas take about 17-19 minutes to bake at in a conventional oven.
Walmart has recently given the Marketside pizza package a makeover, giving it a new look, and bringing its graphic design in line with all of the other Marketside private brand prepared foods products introduced to date.
You can view the pizzas, soups and other items at the http://www.marketside.com/ site.

The reason the soup line have now been added to marketside.com is because Walmart has rolled the items out to many more of its Supercenters and Neighborhood Market supermarkets than was the case when we reported on the new Marketside store brand prepared foods items in February.