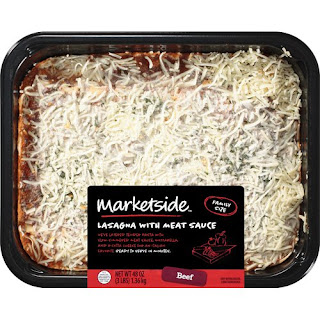 Walmart Stores, Inc. has added two additional SKUs to its Marketside ready-to-heat, fresh prepared entree line, which Fresh & Easy Buzz was the first publication to report on that we're aware of.

The two additional fresh, prepared entree SKUs, sold in 3 pound family-style size packages, are: Lasagna With Meat Sauce (pictured at the top) and Chicken Enchiladas (pictured below). (We recall a similar Chicken Enchiladas entree - but not in the same packaging or same quality product - packed under the Sam's Club store brand, in the past.) 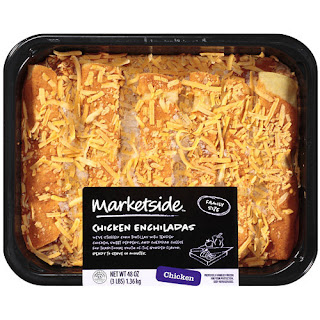 Walmart has posted pictures of the two entree varieties on its marketside.com Web site. The two Marketside entree items we reported on in February (Mac N' Cheese With Bacon and Rigatoni With Italian sausage) weren't up on the site at the time. They are now, along with the Chicken Enchilada and Lasagna With Meat Sauce SKUs.

The marketside.com Web site also has some (but not all of the SKUs in the line) of the Marketside bagged and packaged fresh produce items we reported on in the February piece [Walmart Launching New Value-Added Pre-Packaged Fresh Produce Line Under its Marketside Fresh Foods Brand] pictured as well. All of the SKUs are listed in our story.

There's also a "Bakery" tab on marketside.com. In case you're wondering when you see it, the tab is for a new line of Marketside fresh breads and baked goods the retailer will be introducing soon. Currently if you click the tab it says "Coming Soon." More to come on that "soon" in Fresh & Easy Buzz.

Fresh & Easy Buzz has been out front in reporting and writing about Walmart Stores, Inc.'s development of its new Marketside fresh foods store brand.

For example, see the posts linked below:

>Click here and here for a selection of additional 'marketside' past posts.
Posted by Fresh & Easy Buzz at 6:12 AM