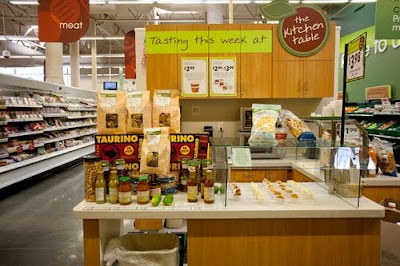 'The 'Kitchen Table,' which along with Twitter is part of a new promotion (see heading below in the story) starting on July 30 at the 34 Fresh & Easy stores in Metro Phoenix, Arizona, is inside all Fresh & Easy Neighborhood Market stores.

It's been in the neighborhood of two years since we first started suggesting in our analytical, prescriptive-oriented posts in Fresh & Easy Buzz that one of the things Tesco's Fresh & Easy Neighborhood Market should do in order to create some excitement in its stores, along with doing so likely helping to increase sales, is to create and conduct frequent promotional product merchandising events and other types of special events in a coordinated, regular and consistent way.

We've also suggested doing this could be a way for the grocer to potentially wean itself from the chronic use of its $5 (off purchases of $20 or more), $6 (off $25 or more) and $10 (off $50 or more) store coupons, which, because Fresh & Easy issues them so often, and are used by shoppers so often, eat into the grocery chain's already poor margins.

The use of the coupons is a quick (sales) fix tactic. Good grocery merchandising-oriented promotions are a strategy. Tesco director and Fresh & Easy CEO Tim Mason is responsible for the chronic use of the deep-discount store coupons though. We aren't in the business of promoting co-dependency, after all.

Tesco's Fresh & Easy has tried to stop using the store coupons more than once - and eventually took our advice and started offering the $10 off ($50 or more) coupons in place of the $5 off coupons in 2009 - but it gave up trying because sales in the stores drops significantly when the gorcery chain doesn't have one of the coupons in circulation. [See - May 1, 2009: Fresh & Easy Brings Back $6-Off Deep-Discount Store Coupon; Latest Version Good For Nearly One Month; New Promo Strategy Didn't Last Long and May 7, 2009: 'They're Back' in Full-Force: Tesco's Fresh & Easy Adds New $6-Off Online Coupon to Just-Recently Direct-Mailed $6-Off Coupon; Tough to 'Terminate']

In weening itself off the chronic use of the store coupons, we've also suggested eliminating the $6 off store coupon and replacing it with the $10 off ($50 or more) and a $25 off store coupon on purchases of $100 or more. Tesco's Fresh & Easy Neighborhood Market tried the $25 off ($100 or more) coupon a couple times but dropped it, going back to the $6 off, which it now uses regularly, along with the $10 off ($50 or more) voucher. Why? Because the average market basket size at Fresh & Easy stores is right around the $25 -to- $35 range. Few of the $25 off ($100) coupons were redeemed. Also, far fewer $10 off ($50 or more) Fresh 7 Easy store coupons are redeemed than its $6 off ($25 or $30 or more) coupons are. Again, it's a function of average market basket size. [Read some of our past stories on the deep-discount store coupon issue here.]

As regular Fresh & Easy Buzz readers are aware, we've said - and written regularly about since 2008 - that Fresh & Easy needs to eliminate the chronic use of the deep-discount store coupons completely if it ever hopes to obtain the gross margins it needs to break even, and eventually turn a profit. If it followed our "weening off" advise starting in 2008, it might have been able to do so by now, without seeing such a big drop in sales whenever it doesn't have a store coupon in circulation. Maybe.

But Fresh & Easy Buzz is used to focusing on a topic, like the store coupons, like the need for Fresh & Easy to do promotional product merchandising on a consistent and regular basis, and like the fresh food and grocery chain's now but not always the case weekly advertising flyer, and seeing our suggestions implemented some time later.

For example, speaking of the Fresh & Easy advertising flyer, which is weekly but wasn't always that way, back in 2008, when the grocer was issuing its ad flyer every three weeks and sometimes every two weeks, we pointed out it was making a big mistake in doing so, since weekly advertising flyers are the norm among U.S. grocers, including those in California, Nevada and Arizona, and as such Fresh & Easy was creating for itself a competitive disadvantage by not following convention. It took Fresh & Easy Neighborhood Market CEO Tim Mason and his senior executive team about a year to catch up with our suggestion that the chain needed a weekly advertising flyer - but they did adopt the suggestion, as we reported and wrote about in this early March 2009 story - March 11, 2009: Fresh & Easy Buzz Redux: Tesco's Fresh & Easy Changes its Promotional Advertising Flyer to 'Weekly;' Something We've Been Suggesting For About A Year.

And of course, it was in 2008 when we first pointed out that Tesco's Fresh & Easy doesn't take WIC Vouchers. The first Fresh & Easy store is set to start accepting WIC on July 29, 2010. See - July 16, 2010: South Los Angeles Fresh & Easy Neighborhood Market Store to Accept WIC Vouchers July 29; Additional California Units to Follow. Fresh & Easy has missed plenty of sales in the over two years since we first suggested they accept WIC. And once all 159 Fresh & Easy stores - particularly those in lower-income neighborhoods - are accepting WIC, the CEO Mason and his team will wonder (or at least should) why they waited so long.

Tesco's Fresh & Easy Neighborhood market is now clearly catching up with our suggestions going back to 2008 that it needs to offer food and grocery merchandising-oriented promotions and other promotional events on a regular and consistent basis, as a way to create excitement in its stores and to sell more food and grocery products, thus increasing sales - and it hopes average shopper market basket size.

Beginning in February 2010, Fresh & Easy Neighborhood Market launched the first of what's been a regular schedule of a wide-variety of food and grocery product merchandising-oriented promotions and special event type promotions. We've given the grocer overall high marks for doing so - and for the quality of the promotions and events.

We've reported on and written about each of the recent key merchandising-oriented and event-oriented promotions mentioned above since February. All are at the links below:

On July 30, Fresh & Easy Neighborhood Market will kick off a back to school trivia and treasure hunt-type contest for its 34 Metro Phoenix, Arizona stores only - and using its Twitter account, which is @fresh_and_easy.

The contest will run from July 30 -to- August 8 2010. Fresh & Easy hasn't formally announced the promotion yet.

In the contest, the grocer will post three tweets each day on its Twitter feed. The tweets will be "clues." Based on the clues, Arizona shoppers are supposed to figure out which of the 34 Metro Phoenix stores are being referred to in the respective tweet. Once a person determines the specific store, they are then to visit the Fresh & Easy Kitchen Table (pictured at top) in the store, where they tell the clerk working in the area what the tweet/clue or promotional code from the tweet is. (The shopper can write it down.) The twitter clue is what we're calling the "trivia" aspect of the promotional contest. The in-store element is the "treasure hunt" aspect.

If the person doing the above is one of the first ten people to do so at that particular Fresh & Easy Arizona store that day, they will win a $50 Fresh & Easy Neighborhood Market gift card. There will be 10 winners each day of the contest.

Prior to playing, people who want to enter have to sign an entry form, which we assume will be located on the Fresh & Easy Neighborhood Market website.

The promotion is creative. We look forward to seeing how it plays out. Tesco's Fresh & Easy needs to make sure its explained very simply though, as we can see the potential for problems if it isn't made extremely clear to potential players.

The promotion also fits with a key suggestion we've been making regarding most of the promotions (there are some exceptions) Fresh & Easy launches, which is that the grocer tie-in store-level product promotion with external media sources, like Twitter and Facebook, as well as radio and other forms of external media when appropriate and affordable. The reason is the in-store promotional event benefits from external ways of driving (pulling) shoppers into the stores. It's simple - but important. In this case, Twitter is designed to be the pull-force, to borrow a marketing term.

It's also not a surprise to us that Fresh & Easy chose Arizona to do the promotion. The grocer needs to significantly boost sales at its 34 stores in Metropolitan Phoenix.

We've been saying for well over two years that Fresh & Easy needs to localize its merchandising and promotions. For example, there's no reason not to do promotion A in Southern California, B in Nevada and C in Arizona. And there's no need to do ABC in all three markets, either at the same time or at all. Regionalism and localism are key elements when it comes to grocery merchandising and promotions. The can also save a grocer money.

If Fresh & Easy executes the Arizona stores' trivia and treasure hunt promotion well, including doing some creative and fun publicizing of the event - which should start soon we would expect since July 30 is only two weeks away - the promotion could be a good one.

One final offering: If Fresh & Easy fails to create product displays featuring back to school type products, including having signage on the displays that ties-in the back to school twitter + in-store promotion, in its 34 Arizona stores during the 60-plus day promotion, it will be making a huge mistake, along with missing out on added sales.
Posted by Fresh & Easy Buzz at 7:34 PM