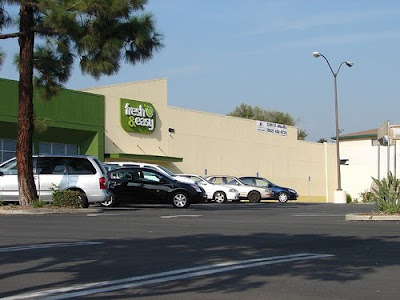 A group of employees at the Fresh & Easy Neighborhood Market store (pictured above) at 4211 Eagle Rock Boulevard in the Glassell Park neighborhood in northeast Los Angeles, California, say they have or are close to having a majority of store workers in agreement that they want to join the United Foods & Commercial Workers (UFCW) union.

The store was one of the first six Fresh & Easy units opened by Tesco on November 8, 2007.

A number of the store's employees met with Tesco Fresh & Easy Neighborhood Market executives at corporate headquarters in El Segundo, California on March 26, and requested to be recognized as a union store. Tesco has thus far denied the Glassell Park store workers' request, which isn't uncommon for a company to do when employees make such a request informally.

The store employees are working with representatives of the Los Angeles UFCW union local to eventually hold an up or down vote of store workers to become a union shop. There are numerous steps that must first be taken, however. One of those steps was the attempt on March 26 of this year to get recognition from Tesco's Fresh & Easy.

Tesco's official position on becoming unionized is that "it's up to the Fresh & Easy employees" to decide if that's what they want. However, it's clear to those involved, as well as to close observers, that Tesco doesn't want Fresh & Easy unionized, which is a position they have a right to hold, just as other non-union food and grocery retailing companies like Walmart, Trader Joe's, Whole Foods Market and others do.

Additionally, at Tesco's annual meeting earlier this month, CEO Terry Leahy spoke out publicly for the first time we're aware of on the Fresh & Easy Neighborhood Market unionization issue, as we reported in this July 5, 2010 story - Verbal Fireworks at Tesco's 2010 Sharholders' Meeting in London.

Below (in italics) is the exchange at the shareholders meeting this month between the UFCW union's Dempsey and Tesco CEO Terry Leahy, as described in our July 5 piece:

Bill Dempsey, director of the UFCW union's Capital Stewardship Program, stepped to the microphone and charged Tesco's senior management of taking a "litigious, divisive approach" in the U.S. with its Fresh & Easy Neighborhood Market and refusing to meet with the UFCW, which represents 1.3 million retail grocery store workers and employees at allied businesses in the U.S., Canada and Puerto Rico.

Dempsey, who's last name happens to be the same as that of the late and famous Irish-American boxer, Jack Dempsey, who's nickname was the "The Manassa Mauler," then counter-punched, saying: “If the Tories and the Lib Dems can agree to form a government, why can’t the [Tesco] management agree to one meeting with the union?" he asked the board.

Apparently Dempsey's comments got Tesco CEO Sir Terry Leahy's Irish up. Feeling his steel cut oats, Leahy replied: "Your union [UFCW] has never welcomed Tesco to the US. You opposed Tesco from day one, and you have gone on opposing and obstructing. This is no basis for a partnership."

Leahy then went on to tell Bill Dempsey, who is no shrinking Irish shamrock himself, that Tesco has "excellent relations" with its Fresh & Easy Neighborhood Market employees in the U.S., who - he added with emphasis - don't wish to join the UFCW union.

This is the very first time Tesco CEO Leahy has spoken out in such a public forum on the Fresh & Easy-UFCW issue in any length, beyond saying: "It's up to our employees to decide if they want to join a union in the U.S." It appears Sir Terry has now determined that Fresh & Easy's store-level workers have decided they don't want to join the UFCW, at least based on his response to Bill Dempsey's question at Friday's shareholder meeting.

In the case of the group of employees at the Eagle Rock Boulevard Fresh & Easy store, who requested union recognition in March, it's obviously not the case not that they don't want to join the union.

On September 26 we reported in this story - "News & Analysis: Employees At Two More Fresh & Easy Grocery Stores Could Soon Request UFCW Union Recognition From Tesco's Fresh & Easy," - that workers at two additional Fresh & Easy stores were in the process of preparing to request recognition as a union shop. The Glassel Park neighborhood Fresh & Easy market at 4211 Eagle Rock Boulevard in Los Angeles is one of those two stores. It's been nearly two years since our report but the store workers' have persisted in working towards their goal.

The employee group at the Glassell Park Fresh & Easy store appears determined, working with the UFCW, to fight to become a union shop. In fact, store workers have been working to build support among numerous customers and members of the neighborhood as part of their campaign.

The UFCW local, working with the employees, is also putting a significant amount of its organizational energy into the campaign to obtain recognition from Tesco for the store.

The union believes the key to unionizing Tesco's Fresh & Easy Neighborhood Market is to get at least one store recognized as a union shop, based on the majority of the store's workers agreeing to be unionized. Once that happens, union representatives think other stores will fall in a domino-like fashion. But it's been a hard slog. And it's far from universal among the employees at the 159 Fresh & Easy stores that they desire union representation.

However, we've been covering the Fresh & Easy unionization issue since the beginning, in late 2007. And the employees at the Glassell Park store are among the most determined group of workers we've seen thus far in terms of being determined to obtain union recognition from Tesco's Fresh & Easy Neighborhood Market.

[Reader Resources: Readers, Click here and here to read past stories in Fresh & Easy Buzz on the Tesco Fresh & Easy Neighborhood Market/UFCW union topic and issue. Use the "Older Posts/Newer Posts" links at the bottom of the pages to view additional pages/posts. Also, note the story links at the end of various stories.

An additional aspect of the UFCW union-Tesco Fresh & Easy Neighborhood Market unionization topic and issue involves the bringing of labor law violation cases before the National Labor Relations Board (NLRB) by the union and two Fresh & Easy store employees. The UFCW also brought a case against Fresh & Easy's meat supplier, 2 Sisters Food Group, which was privately-owned but was recently bought out by Tesco. See our stories about each of these cases below: