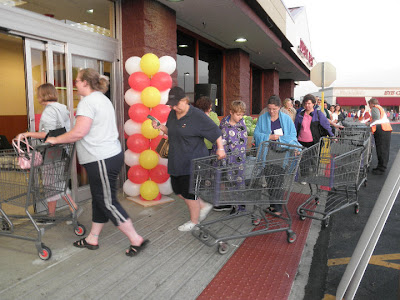 A long line of waiting customers enter the SmartCo Foods store in Centennial, Colorado at 6 a.m. on grand opening day, Wednesday, August 28. A Fresh & Easy Buzz correspondent counted about 300 shoppers waiting in line outside the store early yesterday morning before the doors opened.

Nothing could be more true just a couple weeks later.

Since we published the story on the opening of the second SmartCo Foods combination warehouse format, supermarket and farmers market-style grocery store in Metro Denver (the region is also referred to as the Front Range), Smart & Final has opened two more of its first five stores in the region (for a total of four) - the store in Longmont, Colorado, July 20 (grand opening July 21), and the store in Centennial, yesterday, July 28.

And on August 4, the fifth SmartCo Foods store, this one in the Denver suburb of Littleton, will open. The store is at 3615 West Bowles Ave.

The four SmartCo Foods stores now open are located at:

The store in Centennial, Colorado, the most recent SmartCo Foods unit to open, is 49,000 square-feet. Like all five of the stores, it's housed in former Albertsons supermarkets, which were closed quit some time ago by the retailer.

Also, like the other four stores, Smart & Final has hired a veteran of the Colorado food and grocery retailing market as store manager of the Centennial store. He is Pat Dolan, who has 37 years of experience in the grocery industry, including retail positions at Safeway Stores and Sunflower Farmers Market. 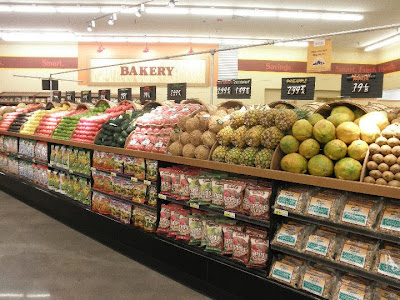 The produce department in the SmartCo Foods store in Centennial, Colorado. Its design and merchandising is very similar to Smart & Final's Henry's Farmers Market stores.

Smart & Final also went all out for the Wednesday, July 28 grand opening of the Centennial, Colorado store, like it has for the previous three units, and like it will on August 4, when it opens the fifth SmartCo Foods store in Littleton.

The grand opening celebration started bright and early at 6 a.m. on Wednesday, when store manager Dolan and other representatives from the grocery chain were joined by local city officials and business leaders in opening the doors to the new store. Shoppers were already lined up outside the store and were welcomed inside for an official welcoming ceremony, which included the cutting of a huge sheet cake decorated with the SmartCo Foods logo. 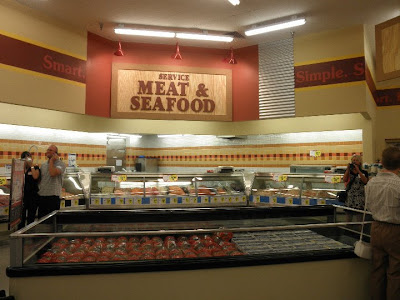 The SmartCo Foods store that opened on July 28 in Centennial, Colorado features a full-service fresh meat and fresh seafood department.

Among the grand opening day events at the Centennial store were giveaway's of SmartCo Foods' gift cards of $20 to $100 to the first 250 customers in line, food demos and free samples, free reusable shopping bags, various kids activities and free gifts, live entertainment and loss leader specials throughout the store. It was an old school grocery store grand openings with some modern day twists.

SmartCo Foods also made two $2,500 donations to two local non-profit groups - The Gathering Place and Colorado Storm Soccer Association - at the grand opening.
The grocer has made the same $5,000 donations at all of its grand openings this summer. For example, at the Longmont, Colorado store opening a week earlier, Smart & Final's SmartCo Foods donated $2,500 to OUR Center and LiveWell Longmont, two local non-profit groups.

When Smart & Final opens its SmartCo Foods store in Littleton, Colorado next week (August 4), it will have opened five stores in a period of just a little over a month. The first store, at 1442 South Parker Road in Denver, opened on June 23.

The Littleton store, which is 42,000 square-feet, will be managed by another veteran of the grocery retailing business and Colorado market region, David Crookston, who has 17 years of experience in the industry, including positions at Sunflower Farmers Market, Wild Oats and Reay’s Ranch Markets, according to a SmartCo Foods' spokesperson.

The grand opening of the Littleton store on August 4 will start at 6 am and include all the bells and whistles that have become the hallmark of the previous four SmartCo Foods' grand openings.

Each of the SmartCo Foods stores are staffed by about 100-115 employees, according to the grocer. Smart & Final has established a standalone SmartCo Foods division in Metro Denver, which is headed by Scott Drew, SmartCo Foods' vice president and general manager. Drew says the company has hired 600 employees to staff the five stores so far.

As we've reported previously, Smart & Final says it plans to open 20-25 SmartCo Foods stores in Metropolitan Denver, Colorado over the next few years. The first five stores range in size from 61,000 square-feet to 41,000 square-feet. The other stores are expected to be in the same size range.

California and Arizona just happen to be the two states where Tesco's Fresh & Easy Neighborhood Market has the majority of its 159 fresh food and grocery stores. There are currently 98 Fresh & Easy stores in Southern California and the Central Valley and 34 units in Metropolitan Phoenix, Arizona. The other 27 Fresh & Easy stores are in Metro Las Vegas, Nevada. If Smart & Final hits the ground running with its SmartCo Foods format and stores in California and Arizona like it has thus far in Colorado, it could add yet another layer of competition - like it's doing in competitive Metro Denver - in two other Western U.S. states where hyper-competition is already the norm.

May 8, 2010: Sprouts, and Likely Henry's to Beat Fresh & Easy to Northern California Despite it's Big Head Start
Posted by Fresh & Easy Buzz at 6:22 PM

LOL. Somewhere there is a market research company selling the same outdated demographic data to Sunflower Markets, Sproutns Farmers (sic) Market and now Smart and Final. Any one of these cheapo chaines would have saturated the market, all three at once is a train wreck. It is nice to see the pressure put on Costco, Sam's, Kings and Safeway to undercut the prices of SF, Sprts, and Smaf's loss leader, b-grade produce. So just what is the business plan here: growth for growth's sake, then bump the stock, then sell and run? I guess we'll see!