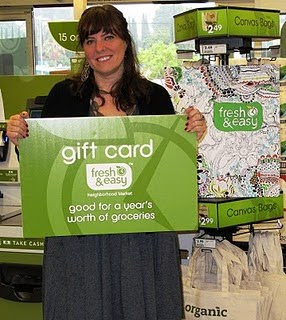 Ms. Close's reusable bag (pictured below), which was one of the three-out-of-eight finalists in the contest we featured in a June 17, 2010 story - Fresh & Easy Neighborhood Market Picks Eight Finalists in its Reusable Bag Design Contest; Website Voting Through June 30 - was chosen as the grand prize winner by members of Fresh & Easy's 'Friends of Fresh & Easy' e-mail marketing program, according to the grocer's announcement today. 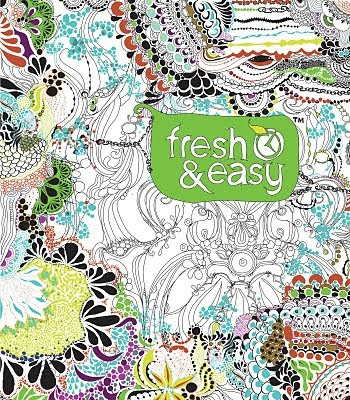 "I was absolutely thrilled when I found out that I won the bag design contest and want to thank Fresh & Easy's customers for voting for my design," Josephine Close says in the announcement. "I wanted to create a piece of art versus another bag with a lot of branding. Instead of drawing fruits and vegetables, I used their naturally-occurring colors to represent them in what I thought was a very abstract and unique way."

You can read Fresh & Easy Neighborhood Market's announcement about the winner here.
Bag design maven Josephine Close will have plenty of free groceries to cart home in her winning reusable shopping bag, since her prize is a gift card from Fresh & Easy Neighborhood Market worth $5,000.
The winning bag design will be featured on a bag that will be offered for sale in all of the Fresh & Easy stores by the end of this year, allowing Josephine Close to see her design offered for sale in over 159 grocery markets in California, Nevada and Arizona, in the form of a Fresh & Easy reusable shopping bag.
A reusable shopping bag design star just might be born. Could there be a reality show in the future: "The Next Reusable Shopping Bag Design Star," perhaps?
Fresh & Easy's Design-A-Bag contest had more than 1,300 submissions, which were made through its website, according to the grocer. As we reported in our June story, eight bag designs - and designers - were then named as finalists in the contest. Fresh & Easy says in its announcement today that nearly 24,000 votes were cast by the 'Friends of Fresh & Easy' members to choose the first place winner - Josephine Close.
With the California State Senate set to likely approve a bill next month - which the Governor has said he will sign into law - banning single-use plastic carrier bags from being used to pack groceries at grocery and drug stores, along with other format stores over 10,000 square-feet that have a pharmacy, followed by convenience stores 18 months later - the timing of Fresh & Easy's bag design contest winning announcement is good.
Further, If Fresh & Easy can get Ms. Close's bag design out into the California stores very soon after the Governor signs the bag ban bill, which could be as early as September, into law, assuming it passes of course, even the better to gain some favorable "green grocer" publicity, if handled well from a media relations standpoint. [Read: July 20, 2010: California's First-in-the-Nation Plastic Carrier Bag Ban Legislation Looks to Be On its Way to Victory]
Fresh & Easy Buzz likes Ms. Close's bag design - it's creative and different than the usual designs chosen by professional designers for reusable shopping bags.
In fact, the paisley design evokes a bit of a 1960's look, in our opinion. And that's a look that surely reflects at least California's history, since the state was the epicenter of the counter-cultural, anti-Vietnam War, mod and related movements collectively known as "the 1960's." Remember how hot paisley was in the 1960's and 1970's old-timers?
The 1960's is also when the "green" or environmental movement took off, with California as it's epicenter. Half a century later it's California that still leads - although the state needs to kick it up a notch as others are gaining on it fast - in the modern day "green" movement, including preparing to pass the first single-use plastic carrier bag ban in the nation.
Therefore, Josephine Close's winning reusable shopping bag design for a grocery chain based in California - El Segundo in the Southland - with its 1960's-evoking paisley motif - is sort of a come full-circle experience, in that it invokes the Golden State's "green" roots while ushering in a new era in which California is posed to lead the nation in the use of reusable bags if and when the current single-use plastic carrier bag ban legislation is passed and becomes law.
Related Stories:
June 17, 2010: Fresh & Easy Neighborhood Market Picks Eight Finalists in its Reusable Bag Design Contest; Website Voting Through June 30
April 19, 2010: Tesco's Fresh & Easy Joins Kroger Co. in Holding Earth Month-Earth Day Reusable Bag Design Contest
July 20, 2010: California's First-in-the-Nation Plastic Carrier Bag Ban Legislation Looks to Be On its Way to Victory
June 19, 2010: 'Paper or Plastic' Likeley to Be Replaced By 'Reusable or Paper' (For a Fee) in California Grocery Stores
June 18, 2010: Kroger's 2010 Reusable Grocery Bag Contest Has Ended; Winners to be Named in July
[Readers: Click here for a complete selection of posts on the reusable shopping bag topic and issue from Fresh & Easy Buzz.]
Posted by Fresh & Easy Buzz at 3:35 PM