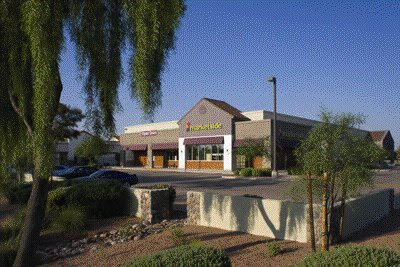 This morning Wal-Mart, Inc. officially opened the doors of its first four small-format Marketside grocery and fresh foods markets in the Phoenix, Arizona Metropolitan region cities of Gilbert, Chandler, Mesa and Tempe.
Some of the stores, such as the Mesa unit (pictured above), had soft openings on Thursday and Friday. But today was the official grand opening for all four of the Marketside units. Grand opening activities began at 10am this morning at all four stores.
The Mesa store had many more shoppers (and curious grand opening lurkers as well) today than it has had in the two days of soft openings. That's largely do to the fact the official announcement of the Marketside stores opening was for today.
We will be bringing readers additional information about the Mesa Marketside store's grand opening, along with information about the others three stores' grand openings as well, later today and on Sunday.
Additionally, scroll down the blog and you will find additional recent stories about Marketside, along with links to past related pieces.
Reader Comments Open Thread
If you attended any of the four Wal-Mart Marketside store grand openings today, or have any general comments about the stores or the concept, please offer your comments and opinions using the "comments" link below. That's what we mean by the "open thread" part of the title at the top of this post. Reader input. It's your thread.
Posted by Fresh & Easy Buzz at 4:02 PM

Never thought I'd say this, but go WM. I won't shop there, but kick F&E's ass back to England. Dealing with them is a pain. They are unbelievably arrogant and I hope WM gives them their comeuppance. Plus, F&E just plain doesn't understand Americans.

Tempe Marketside. Moderately busy in late pm. Likes: bought a great sandwich. Also bought about 25 bucks worth of cooked foods stuff. Store look is pretty impressive actually. Didn't buy any regular groceries but the prices looked decent. Produce looked fresh. The clerks were all over the customers friendly. Not sure on the total selection for regular shopping. But need to make another trip as it was fairly busy and I didn't have much time.

Visited a the Marketside store today. My take is its more like a mini Whole Foods store accept it sells everyday grocery products along with the prepared foods and organic items.

The prices aren't as low as the Wal-Mart Supercenter where I shop but that doesn't surprise me.

The kitchen in the store is an interesting touch. The food cooking gave the store a nice smell.

The store was selling $6 prepared foods items for 6 cents as a promotion.

All in all very impressed.

What a great idea. The food we purchased looked and tasted fabulous. Way to go Marketside. Do try the grilled chicken with tomato butter.

The Marketside is 15 minutes from my house which is about the same for the Fresh & Easy. We shop Wal-Mart Supercenter then fill-in at Fresh & Easy and sometimes Safeway. Was in Marketside today and its either going to be split the fill-in shopping now between Marketside and Fresh & Easy or choose one of the other. But we still like our stores big and cheap for variety as the main store. That's the Supercenter for us.

I still prefer Trader Joe's to Fresh & Easy or Marketside, although I was in the Mesa Marketside earlier today and must say I was impressed with the store.