'The Promotional Pundit:' How Wal-Mart Can Use its Supercenters to Create Customers For its New Small-Format Marketside Stores in Arizona 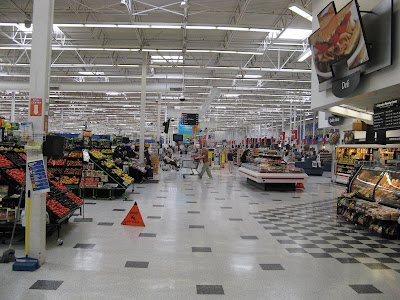 Pictured above is a 200,000 square foot Wal-Mart Supercenter in the Phoenix, Arizona Metropolitan area. There's plenty of room inside the mega-stores for a 400-600 square foot 'Marketside' promotional kiosk.

We've been discussing the theme in Fresh & Easy Buzz that Wal-Mart, Inc.'s new Marketside format and stores -- the first four which opened officially on Saturday in the Phoenix, Arizona area cities of Gilbert, Chandler, Mesa and Tempe -- are a different retail animal from a strategic positioning standpoint than Tesco's Fresh & Easy stores are because for Wal-Mart Marketside is just one part of a four-format (Supercenters, Sam's Club, Neighborhood Market supermarkets and now Marketside) food and grocery retailing retail format strategy while Fresh & Easy is currently a single-play, single-format strategy in the U.S. for Tesco.

For example, we discussed the theme as part of an observational, analysis and commentary piece in the Blog published yesterday: "Wal-Mart's Marketside is More Than the Sum of the Parts of its Other Formats; While Time and Consumers Will Judge, We See the Format As A Stategic Fit."

In this piece today we outline and explain what we believe is a powerful marketing and merchandising aspect and tool of Wal-Mart's multi-format food and grocery retailing strategy which the retailer could use to not only create what we believe could be thousands of new customers (trial) for its four Phoenix region Marketside stores, but also use as an ongoing high-impact, low-cost marketing and cross-promotional tool which leverages its existing resources.

Those specific existing resources are the Wal-Mart Supercenter stores located in and near the four cities where the Marketside grocery and fresh foods stores are located.

Wal-Mart has about 70 Supercenters currently open and operating in Arizona. Additionally, there are a number of these Supercenters in and around Gilbert, Chandler, Mesa and Tempe, the four cities where the new Marketside stores are located.

Each Wal-Mart Supercenter is a form of media in and of itself in that tens of thousands of shoppers visit a typical Wal-Mart Supercenter each week. That's why so many consumer packaged goods marketers use (and pay to do so) Wal-Mart as their in-store advertising and promotional medium -- point-of purchase displays, brand signage, in-store brand videos, ect. It's also why Wal-Mart uses what's referred to as in-store shopper marketing so frequently. This essentially is using the store as the marketing medium as we described above.

With that introduction to the premise, here is one marketing and merchandising campaign we would launch right away for the four Phoenix region Marketside stores using the various Wal-Mart Supercenters located in and around the four Phoenix area cities.

First, we would install a "Marketside Kiosk" in every one of these nearby Supercenters. The kiosk would be about 400 -to- 600 square feet in size and located in a promenant part of the Wal-Mart Supercenter. Many Supercenters have space in the front of the stores designed for such promotional purposes. So in most cases that's where our kiosk would go.

Additionally, the Marketside in-Superstore kiosk would focus primarily (but not exclusively) from a merchandising or product selection aspect on the prepared foods offerings at the Marketside stores.

For example,there would be a service refrigerated case in the kiosk where a person would hand out free samples of a changing selection of the various fresh, prepared foods offered in the four Marketside stores.

The kiosk would also have some mock shelving and such with a representative selection of products sold in Marketside so as to create that "Mini Marketside" store effect for the kiosk as we described earlier. Doing so also provides and reinforces the informational purpose of the in-Supercenter Marketside Kiosk.

We also would use the kiosk (and parts of the Supercenter) as a cross-promotional tool.

For example, we would place point-of purchase signs at every checkout lane in the front-end of the Supercenters. These signs would tell customers checking out that if they purchased $25 or more at the Wal-Mart Supercenter they could come over to the in-store Marketside Kiosk with their purchase receipt and receive a coupon good for free prepared foods items (say a $6 dinner entree) at one of the four Marketside stores.

We would run this promotion say twice a week for a month to start to create impact. Also, doing so on a more frequent basis could get expensive.

This in-store promotion does two things. First it drives shoppers over to the in-Supercenter Marketside Kiosk. Second, it ties-in what they purchased at the Supercenter with what they now can get for free at Marketside. We think it's a safe bet the majority of the Supercenter shoppers aren't going to have been previously aware the Marketside stores exist. They would be with this in-store promotion. They also sould spread the news through word of mouth advertising.

The cross-promotion is all about creating awareness of -- and driving consumers to -- one or more of the Marketside stores. Since you are dealing with existing Wal-Mart shoppers under the Supercenter roof, that's an additional bonus, since there's an implied loyalty to Wal-Mart by virtue of the fact the shoppers are shopping a Supercenter.

A 'Taste of Marketside'

Another in-Supercenter promotional event we would hold, using the Marketside Kiosk as the central organizing principle and marketing vehicle in-store, is a "Wal-Mart Supercenter Taste of Marketside."

We would pick a Saturday in which we would bring in selected employees from all four of the Arizona Marketside stores to the nearby Supercenters. Sampling stations would be strategically set up throughout the Supercenter -- from the produce department to the automobile parts department -- where prepared foods items from Marketside would be sampled to Supercenter customers by the visiting Marketside store employees. Of course, as part of the tasting the employees would hand out Marketside brochures, coupons and other promotional goodies to Supercenter shoppers, along with the various "tastes of Marketside" in the form of the prepared foods samples.

Each shopper also would receive a raffle ticket from the folks at the sampling stations. We would hold a drawing every 30 minutes in which a $25 gift certificate for free goods at the Marketside stores would be given away.

In order to get in the drawing, the shoppers would have to bring their raffle ticket to the in-Superstore Marketside Kiosk. That's where the raffle would be held. The drawing would take place in the kiosk and the winner announced each 30 minutes over the store's public address system. This would serve to not only create excitement but bring the shoppers back to the kiosk for a second look at Marketside. (they also need to return to the kiosk to get their coupon when they win the raffle.) It also makes shoppers linger longer -- and perhaps make additional purchases -- in the Supercenter. That's promotional synergy.

Such promotional campaigns as we describe above are all about creating synergies. And only multi-format retailers can do so in the way we describe.

Additionally, the promotion is all about the "piggy back effect." That is using the established "big guy" (the Wal-Mart Supercenter) to assist the new, fledgling "little guy," (Marketside). Of course because of the synergies, the "big guy" benefits from assisting the "little guy," which is how it should be in muti-format retailing cross promotions, as well as it should be with life in general.

The store is the medium, the kiosk the message

The store (Supercenter) is the marketing medium and the Marketside Kiosk is the message.

Think of it as just another aspect of shopper marketing. But instead of promoting brands and products in-store, you're promoting one of Wal-Mart's other formats -- it's newest one and the one that is different from all the others because of its "food-centric" premise, Marketside.

A promotion like this, which is cheap and uses existing resources (the Supercenters), can only be done by a multi-format retailer, as we mentioned earlier. You've got to have more than one format and the stores to do it.

We think its powerful because of the captured consumer audience that exists in the Supercenters, the pleasure shoppers get from food sampling in-store, the synergies it creates for both Marketside and the Supercenters, and a number of other high-impact reasons.

Most important, it will create much awareness about and drive lots of new customers to the four new Marketside stores in the four Phoenix Metro region cities. And once that phase of the in-Supercenter campaign is over, the kiosk can easily be used if desired for various promotions designed not only to generate new custoemrs for Marketside but also to retain them, along with coming up with various ways to assist in increasing the market basket sizes at the Marketside stores.

After all, the "big guys' (Supercenters) should always be the first in the family (Wal-Mart, Inc.) to give an assist to the "little guy," (Marketside). And with such synergies in play, that "big guy" will gain additional benefits for giving his smaller cousin (Marketside) that helping promotional hand.

Coming soon: What Tesco's Fresh & Easy can do counter-promotionally as a single-format retailer.
Posted by Fresh & Easy Buzz at 9:16 PM