Lend A Hand: One Way to Remember and Honor Those Who Served on Memorial Day

Memorial Day, originally called Decoration Day, is a day of remembrance for those who have died in our nation's service.

Honoring those who have died serving couldn't be more important than it is this Memorial Day. American men and women are fighting in two wars, in Iraq and Afghanistan. Since September 11, 2001, more than 5,000 Americans have lost their lives in the two wars, and tens of thousands more have returned home wounded.

For those who serve, nine years of war on two fronts has taken its toll on many of these service men and woman, particularly those wounded warriors and their families.

One way to honor those who gave their lives in our nation's service is to do what we can to assist those groups and individuals serving members of the military and honoring the memories of veterans past. We've chosen on this Memorial Day to highlight three groups doing just that.
Operation Homefront
Operation Homefront, a non-profit organization dedicated to helping America's service men and women of the Iraq and Afghanistan wars, exists as a lifeline to returning soldiers and their families, especially those who return wounded.

As you celebrate Memorial Day, one simple way you can help these wounded warriors and their families is by making a donation to Operation Rescue. Fresh & Easy Buzz can tell you any amount of money you donate will be put to use directly helping the service men and women who need assistance, along with their families. It's important to remember that when a family-member serves in war, his or her family also is serving in a real and meaningful way.

You can view Operation Homefront's website here. On the site is a listing of immediate needs the group can use financial help with, along with information on how to make a general donation to the cause. There's also information about how businesses and individuals can hold fundraising events for Operation Homefront, along with information on how you can volunteer with the organization that provides a real and material lifeline to America's wounded warriors.
A National World War I Memorial: Frank Buckles' Last Battle 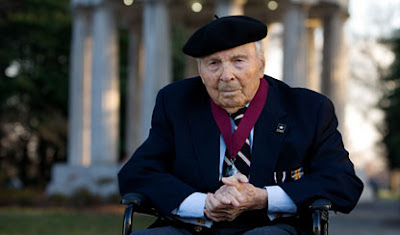 In 1917 Frank Buckles (above), America's last living veteran of World War I, enlisted in the United States Army, telling the recruitment officer he wanted to be sent to France to fight on the front lines.

At 109-years old, Frank Buckles has launched what likely will be his last battle: He's joined The World War I Memorial Foundation as its spokesman.
In March 2008, Mr. Buckles visited the District of Columbia War Memorial on the National Mall in Washington DC. There he saw a peaceful, secluded memorial, which was dedicated in 1931 to honor the 499 residents of the District of Columbia who gave their lives in World War I, in a state of neglect and extreme disrepair.
While visiting the memorial he also recalled that there is no national memorial to World War I. As a result, Frank Buckles' is leading the charge - his last battle - for the restoration and re-dedication of the D.C. memorial as a National and District of Columbia World War I Memorial.
There are national memorials for World War II veterans - the World War II National Memorial dedicated just a few years ago - for veterans of the Vietnam War - The National Vietnam Veterans Memorial, which opened in 1982 - and Korean War veterans - but a similar national monument for World War I veterans doesn't exist.
In 2014 the world will mark the centennial of World War I, also called the "Great War." Nearly 5 million Americans served in World War I, and 116,516 Americans died overseas. the "Great War" marked the first time in U.S. history that American soldiers went abroad to defend foreign soil against aggression. World War I also ushered in what historians call the American century.
The World War I Memorial Foundation was formed to make Frank Buckles' dream a reality. The mission of the Foundation is to advocate and raise funds for the re-dedication of the DC War Memorial as a national World War I memorial, dedicated to all those Americans who served in the "Great War."
All of the veterans of World War I have left us, accept for Frank Buckles. That fact makes it even more important we help the foundation to achieve its goal of creating the World War I National Memorial. We owe it to those veterans of the "Great War," their families, ourselves as Americans, and to history.
The World War I Memorial Foundation needs donations for the restoration project. Please go to the website here and help. Donations can be made online. There's also an online petition at the site. The group asks you to sign it in support of the memorial.
Additionally, the foundation needs people to write their Members of Congress and Senators, asking them to support S. 2097, the Frank Buckles World War I Memorial Act. [More information here.]
[Suggested reading: Richard Rubin, who is writing a book about the last American veterans of World War I, has an essay about Frank Buckles in today's Parade magazine here. Photo credit: Frank Buckles, 109 years old, at the WWI monument for D.C. residents, by David DeJonge.]
Bugles Across America
If you've attended a funeral memorial service for a veteran of the United States Military in the last ten years and there was a uniformed military bugler playing taps at the service, the bugler's being there is most likely thanks to the organization Bugles Across America. 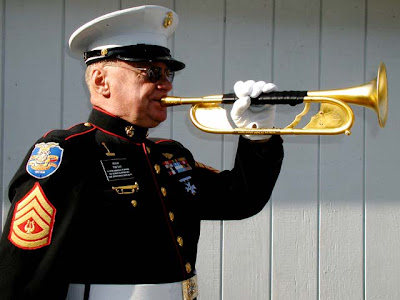 In 2000, Marine Corps veteran and bugler Tom Day (pictured above playing his bugle at a memorial service) was watching the news on his television at home. He saw a report in which a Pentagon official was talking about the then new law the U.S. Congress had passed. That legislation, passed in 2000 and signed by President Bill Clinton, gave every veteran the right to have at least two uniformed military people to fold the flag and play taps on a CD player at his or her memorial service. Asked in the news piece by the television reporter why taps was to be played on a CD player rather than by a live bugler, the Pentagon Official said it was because there's a shortage of buglers out there in America. A true statement then and now. Sitting in front of his television that evening Tom Day said: "I'll get them for you."

And he is. In 2000, Tom Day started Bugles Across America, which provides a live bugler for any U.S. veteran who requests one at his or her funeral memorial service.
"Bugles Across America was begun to take this a step further, and in recognition of the service these veterans provided their country," Tom Day says. "We felt that every veteran deserved a live rendition of taps played by a live bugler. To this end, we are actively seeking volunteers to provide this valuable service to veterans and their families."
Bugles Across America now has over 5000 bugler-volunteers located in all 50 U.S. states - and can use even more, according to Tom Day.
Bugles Across America could also use financial assistance in the form of donations of any size. He doesn't like to talk about it but when pressed Day says he has been spending about $10,000 annually out of his own pocket to support the organization he founded. And it's something he's willing to continue doing as long as his bank account holds out.
He shouldn't have to though - should he?
It may seem like a little thing, having a live bugler play taps at the memorial service of a veteran, but sometimes those little touches are what matter most. If you agree, like we do, you can make a donation in any amount to Bugles Across America at its website here.
And if you can play (or know a person who can) a bugle - or a trumpet, cornet, or flugelhorn - Tom Day wants to know. (See the website.) The bugler can be of any age as long as they can play the 24 notes of Taps with an ease and style that will do honor to both the Veterans, their families, and the burial detail performing the service, says Day.
Happy Memorial Day.
We hope our readers will join us and millions of others at 3 p.m. on Memorial Day, May 31, by taking a one minute moment of remembrance.
The National Moment of Remembrance, established by Congress, asks Americans wherever they are at 3 p.m.on Memorial Day to pause in a one minute act of national unity. The time 3 p.m. was chosen because it is the time when most Americans are enjoying their freedoms on the national holiday. The Moment does not replace traditional Memorial Day events; rather it is an act of national unity in which all Americans, alone or with family and friends, honor those who died for our freedom. It will help to reclaim Memorial Day as the sacred and noble holiday it was meant to be. In this shared remembrance, we connect as Americans. [More information here. Videos for moment of silence on Memorial Day]
Posted by Fresh & Easy Buzz at 6:31 PM