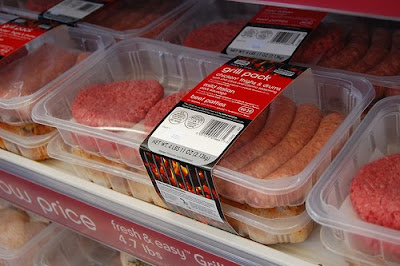 The upcoming three-day Memorial Day weekend holiday marks the "official" start of the grilling season for Americans, although with gas barbeques, covered patios and indoor grills, grilling season has become a nearly all-year affair in many parts of the U.S.

Grilling season offers food and grocery retailers the opportunity to not only increase sales of those center of the plate fresh meat items for grilling like beef, pork, poultry and seafood, but also of related items such as fresh produce, starches, condiments, breads, beverages, non-foods and more.
Over the last few years food retailers have increasingly been competing for shoppers' grilling season dollars, looking to create not only a competitive advantage over other grocers on the price (lowest) and quality (value) of fresh meat, poultry and seafood items, but also coming up with ways to ad value to those raw animal delights, which will find their way to a hot grill soon after being brought home from the supermarket. We call it: Ready-to-Grill fresh meat merchandising.
Two California grocery chains, El Segundo (Southern), California-based Fresh & Easy Neighborhood Market and Sacramento-based Raley's, have each created different ways to ad value to fresh meat, poultry and seafood items sold in their stores for the prime grilling season and beyond. The goal of both grocers is the same: To increase fresh meat category sales by tapping into shoppers' desire for convenience in the form of ready-to-prepare foods.
Fresh & Easy Neighborhood Market
Fresh & Easy Neighborhood Market, which is owned by United Kingdom-based Tesco and has 159 stores in California (Southern California, Bakersfield and Fresno metro-areas in the Central Valley), southern Nevada and Metropolitan Phoenix, Arizona, and annual sales of about $544 million, is introducing eight new fresh meat and chicken grill packs to its stores, adding to the six varieties it already offers.
The eight new fresh & easy branded grill packs are:
>12 Quarter Pound Hamburger Patties (3 lbs)
>Smokey BBQ Boneless Pork Chops (1 lb 4 oz)
>BBQ Marinated Chicken Thighs and Drumsticks (2 lbs 2 oz)
>Buffalo Marinated Chicken Thighs and Drumsticks (2 lbs 2oz)
>Lime & Cilantro Chicken Breast (1 lb 4 oz)
>Teriyaki Chicken Breast (1 lb 4 oz)
>Santa Maria Tri Tip
>Smokey Garlic Pork Tenderloin
Seven of the eight new grill pack items are value added, meaning they contain marinades, sauces and seasonings, so all shoppers (and grill-masters) need do is open the package and toss the meat on a hot grill.
The key customer proposition from Tesco's Fresh & Easy with the value-added grill packs is: convenience; ready-to-grill.
Raley's
Sacramento, California-based grocery chain Raley's, which operates 133 supermarkets under the Raley's, Bel-Air, Nob Hill Foods and Food Source banners in Northern California and has annual sales of about $3.4 billion, is taking a very different approach to adding value to the fresh meat, poultry and seafood items it sells in its stores, both for grilling season and everyday. Raley's recently introduced a "Marinades & Rubs Station" in its stores' meat departments. 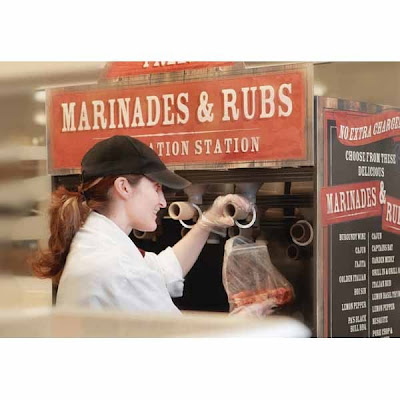 The in-store kiosk (pictured above) offers 24 varieties of free meat, poultry and seafood marinades and seasoning rubs - 12 marinades and 12 rubs. Customers simply take the meat, poultry and seafood items they've selected while shopping over to a clerk at the in-store station or kiosk, then choose from the 24 varieties which one(s) they would like on the various items. The clerk then marinates or "rubs" the meats for the shopper free of charge. [You can view a list of the 24 varieties here.] Raley's offers recipes featuring the various marinades and rubs at the kiosk and online at its website.
Limited vs full mass-customization
We call Fresh & Easy's value-added, pre-packaged grill pack approach "limited mass- customization." The concept of mass-customization applied to retail food and grocery merchandising essentially means attempting to add value to and customize products, such as fresh meats, to shoppers taste preferences in a general but yet somewhat specific way.
The pre-marinated and pre-seasoned grill packs offer one option per item-package to shoppers. For example, if a customer wants a Smokey-Garlic Tri-Trip rather than a Santa Maria Tri-Tip, it's not available. The same is the case if a shopper wants a Santa Maria Pork Loin rather than a Smokey-Garlic Pork Loin. Further, You can get a Lime & Cilantro or a Teriyaki Chicken Breast - but not a Santa Maria or a Smokey Garlic Chicken Breast. In other words, the pre-marinated and pre-seasoned grill packs are limited to the variety of marinade or seasoning Fresh & Easy decides to offer in them.
Conversely, we call the Raley's ready-to-grill fresh meat merchandising approach full mass- customization. It's mix & match. Rather than offering a selection of set, pre-packaged pre-marinated and seasoned meat, poultry and seafood items (the grill packs), the retailer instead offers a choice of 24 marinades and rubs in bulk form. Customers can choose whatever variety of marinade or seasoning rub out of the 24 options - or even choose multiple marinades and rubs on the same meat item if they like - they desire for their meat, poultry or seafood purchases.
The key difference with the Raley's approach is that it offers additional choice, hence the full mass-customization definition.
Using our above example, a shopper can get his or her Tri-Tip or Pork Loin pre-marinaded and ready-to-grill in a choice of 12 marinade varieties, as well as having a choice of 12 seasoning rubs. Of course, the choice is limited to the 24 total.
Raley's value-added fresh meat approach also offers a "high-touch" aspect in the form of a store associate who interacts with shoppers and prepares their meat items at the marinade and seasoning rub station in the meat department.
We aren't suggesting one grocery chains program is superior to the other. That's for shoppers to decide. In fact, each of the grocer's programs fits their respective formats: Fresh & Easy's pre-packaged approach fits with its emphasis on pre-packaging fresh foods category wide - produce, meats and prepared foods - in its stores.
Conversely, Raley's is a superstore operator and offers both pre-packaged and service types of merchandising in its stores, particularly in the fresh, prepared foods category. Raley's also puts more of a premium on service, that "high touch" element mentioned earlier, in its stores than does Tesco's Fresh & Easy Neighborhood Market.
Tesco's Fresh & Easy Neighborhood Market and Raley's don't yet compete.
Raley's stores are located in Northern California's Sacramento region, Northern Central Valley, San Francisco Bay Area and south coast. Fresh & Easy has yet to open any of its 37 confirmed store locations - 19 in the Sacramento-Vacaville area and 18 in the San Francisco Bay Area - in Northern California.
Competitors at present or not, Fresh & Easy and Raley's are taking very different merchandising approaches towards the same objective, which is to add value (the mass-customization approach) to the fresh meat, poultry and seafood products sold in their respective stores, along with tapping into the desire among a high percentage of shoppers for convenience, as a way to differentiate the chains and stores among shoppers and thereby grab more of a share of fresh meat category sales in each of their markets.
Let the "official" grilling season begin.
Posted by Fresh & Easy Buzz at 6:43 PM