iKristen Buys Her Fresh & Easy Bag(s) -- and It's Almost the Right One: A Tale About the Power of Social Media Sites For Grocer-Consumer Interaction 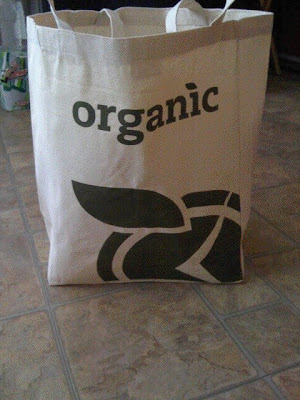 iKristen saw the Fresh & Easy reusable shopping bag pictured here on the grocer's flickr.com site and wanted it. When she went to her neighborhood Fresh & Easy market it didn't have her desired bag. But she bought two of the reusable bags pictured above at the store anyway. [Photo Credit: iKristen from Twitpic.]

iKristen, who says she shops often at a Fresh & Easy market in her neighborhood, spotted a picture of a Fresh & Easy reusable canvas shopping bag she liked on Fresh & Easy's flickr page. She posted a comment on the picture at the Fresh & Easy flickr site, asking where she could buy the bag.

She also did double-social-media-site-duty by posting a "Tweet" to Fresh & Easy Neighborhood Market's Twitter.com feed, asking the same question: Where she could get the reusable bag she liked.

A member of Tesco Fresh & Easy's marketing or public relations team responded back to iKristen on Twitter, suggesting how she could find the reusable bag she wanted.

And fellow Twitter-user iKristen saw and read our post in which she is mentioned.

In addition to being an avid social media site user, iKristen also has a Blog, "Mom of 2 Girls: It's complicated and It's simple,"which we just recently learned about.

After reading our April 27, 2009 piece in which we mentioned her exchange with Fresh & Easy Neighborhood Market over her desire to find out where she could purchase the reusable bag, she decided to post a "thank you" to Fresh & Easy Buzz about our mentioning her in our story in her Blog.

IKristen now informs Fresh & Easy Buzz via Twitter.com that she has bought a Fresh & Easy Neighborhood Market reusable bag -- two in fact, she says. See her "Tweet" (Twitter-talk for a post) below:

iKristen@freshneasybuzz I got my bag 2 in fact! But I bought them :) http://twitpic.com/47zyu10:33 AM Apr 29th from TwitterFon.

iKristen's comment in her "Tweet" about "buying" the two bags has to with a suggestion we made in our April 27 piece that Tesco's Fresh & Easy should give her a free bag in return for all of the positive social media "word-of-mouth" awareness she created for the bag, and thus Fresh & Easy.

But sadly, iKristen wasn't able to get the original Fresh & Easy Neighborhood Market reusable bag she liked and much desired on the grocer's flickr page. View that bag here (at the top of the page). The two bags she bought are the "Organic" version pictured at the top of our story and here.

The Fresh & Easy Neighborhood Market store where iKristen shops -- her neighborhood market -- didn't have the version of the bag she wanted -- the original one from flickr.

Below are iKristen's "Tweets" to Fresh & Easy Buzz explaining what happened when she went shopping for her Fresh & Easy reusable bag:

1. iKristen@FreshNEasyBuzz the lady that worked there didn't seem to know what I was talking about lol. 6 minutes ago from TweetDeck in reply to FreshNEasyBuzz. (We had asked her via a "Tweet" a bit earlier why she didn't buy the bag she wanted. She had earlier "Tweeted" us a link showing the bag she bought.)

2. iKristen@FreshNEasyBuzz I bought 2 of the organic, I like those too. my F&E stores didn't have the ones from the flickr page. 6 minutes ago from TweetDeck in reply to FreshNEasyBuzz

But it just so happens that the Fresh & Easy Neighborhood Market employee from the retailer's marketing or PR staff who "Tweeted" back to iKristen regarding her flickr and Twitter inquiries about where she can get the bag told her this:

@iKristen you can get the tote with the apple clock up where the rest of the canvas bags are sold (by the check outs). Its my fav bag too! about 9 hours ago from web in reply to iKristen.

But, not only wasn't the bag in that spot in iKristen's neighborhood Tesco's Fresh & Easy store -- it didn't exist at all in the store.

Having to drive all over looking at other stores outside of her neighborhood sort of defeats the "neighborhood" concept of Fresh & Easy Neighborhood Market for iKristen and other shoppers, after all.

iKristen isn't asking for a free bag (she has no idea we are mentioning her again in a post let alone focusing this one on her social media interaction with Tesco's Fresh & Easy). She bought two bags and appears happy.

But... it would be nice, not to mention good marketing and public relations, for the Fresh & Easy Twitter "Tweeter" marketing or PR person to do so. anyway. At least we think so.

And -- by the way, locating the original reusable bag -- the one that got iKristen excited to start with -- and sending it to her for no charge would also be......well, down right good neighborly.

We think the story is a cute and interesting one.

But it's not just about cute and interesting. We think it illustrates just how powerful -- and how much more powerful the phenomenon will become -- of a tool social media sites are and can be for grocery retailers. It's all about retailer-consumer interaction without a filter. A conversation. And in this particular case it even led to a sale for Tesco's Fresh & Easy.

With the advent of social media, it's no longer your grandfather's -- or even your father's -- food and grocery retailing world any longer. Stay tuned.

Thanks again for the post. I really would like the bag, if only I could find it. :)

My God yes, find her a bag Fresh & Easy. She is so sweet. And read her Blog. She's a big fan of the stores.

We have these bags at my store, they come in much smaller quantities at a time, I'm sorry our store was out.

Send me your address, via flickr, if you'd like. I'd be thrilled to send a bag your way!

I like the Organic bag. Can someone please tell me what it retails for? Can I get it at any fresh & easy store?

FreshNEasyBuzzi-iKristen gets a bag offer from the famous F&E Gal@http://freshneasybuzz.blogs...
less than 5 seconds ago from web

Did Kristen and F&E Gal hook up on her getting the free bag?

He wants to know if the "Organic" reusable bag is made from organic cotton/material. We don't know. Can you help him with an answer?

F&*E Gal is nice enough to send me the bag! Thank you again.

The bag is made from 100% Organic Materials, and its recycled materials.

I've been following this thing and it's super interesting. F-E Gal, don't know if you are store manager or what but what you did shows total class and dedication. If brokers called on Fresh & Easy stores would buy you lunch. I checked Twitter and noticed the PR people never responded again to Kristen. Sad. But F-E Gal stepped in. Store people always come through.

Bought 2 of the Organic bags today. Also wanted one like your original Kristen but they didn't have it at the store I went to either. So settled for the two organic ones. Thank you.

F&E Gal is a great employee. Dedicated. They're fortunate to have her.

I do a blog on Bnet.com, the CBS Interactive web site and I chronicled the tale for our management audience as a little object lesson in social networking, thanks to a little prompting by Mike the Food Broker. http://industry.bnet.com/retail/10001686/tesco-twitters-its-way-to-family-success-at-fresh-easy/#comments

Below is the link to the post mentioned above by Bardmike; the one he wrote on the Bnet.com Web site about Fresh & Easy Buzz's coverage of the iKristen-F&E Gal reusable bag story.

The link on his comment post is to a previous post he wrote about Tesco's Fresh & Easy and its use of Twitter.com. That post is titled "Tesco Twitters its Way to Family Success at Fresh & Easy."

(Note to Bardmike: Since Tesco just recently reported a full-year loss of $200 million on sales for Fresh & Easy of just $300 million, that performance suggests (following on the theme) considerable more "Twittering" must be needed to arrive at the destination called "success.":)

Thanks for your participation, and the information, Bardmike.

Here's what he says about F&E Gal:

"F&E Gal is getting a little recognition here. And hopefully, Fresh & Easy will extend some, too"