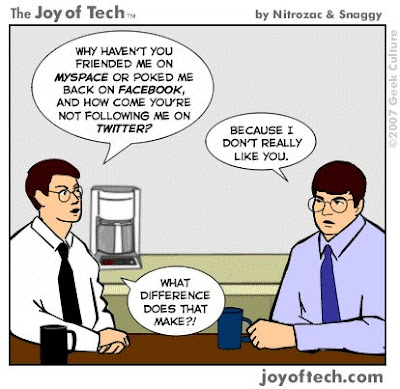 In our original story on the topic on January 18, we discussed the fact that numerous food and grocery retailers, in addition to Tesco's Fresh & Easy, are using Twitter as a social marketing and communications tool designed to talk (and listen) to customers and potential customers. We also listed a few of those retailers. We also suggested those grocers (and other retailers for that matter) that aren't currently using Twitter.com, or that have a Twitter site but barely use it, are in our analysis missing out on what is a very strong and super-inexpensive tool -- Twitter.

It appears others in the form of investors agree with us about Twitter.

Reports over the weekend say Twitter Inc. has reportedly raised about $20 million in new investments based on a valuation of the company at up to $250 million.

These reports come from the TechCrunch.com technology Blog and the Wall Street Journal's All Things Digital Blog. Both Blogs, which follow the technology inductry and sector closely, are citing unnamed sources that are saying that the San Francisco, California-based social networking and micro-blogging company has followed up on its previous $20 million in funding with a similar sized round that has yet to be announced.

Both Blogs are very plugged-in to what's happening in Silicon Valley and in San Francisco's new media business community. Therefore the probability that the reports are correct are high in our opinion.

In the summer of 2008 the popular social networking site Facebook.com offered to acquire Twitter for what was about half of its current $250 valuation. It looks like the young twenty-something founders of Twitter knew what they were doing by refusing the Facebook deal and remaining independent.

Twitter has been growing users faster than wild mustard grows in Napa Valley, California after a spring rain, followed by lost of sunshine. Therefore its no surprise investors want to put money into the micro-blogging company despite the recession, and despite the fact Twitter doesn't sell advertising on the site and therefore has no real revenue stream -- yet.

Twitter was originally designed as a social networking tool for individuals to let each other know what they are doing in real time. In fact, one of the site's tag lines is: "What are you doing."

Companies of all sorts -- such as grocery chains Fresh & Easy Neighborhood Market, Whole Foods Market, 7-Eleven and others -- are using Twitter in a variety of ways, both as a social marketing tool as well as for other forms of communication. Corporate use of the site is new and evolving.

The New York City-based Embassy for the State of Israel even used Twitter recently for a citizen press conference regarding its invasion of the Gaza Strip.

Meanwhile individuals remain the backbone of Twitter. And many refer to themselves as "Twitter addicts," posting such mundane messages (called Tweets) like announcements that they are at the grocery store or getting ready to go to bed. Twitter can be used via handheld personal communication devices as well as with desktop and laptop computers. But in many ways it is these mundane messages that make Twitter so interesting. After all, when was the last time a total real life (but not virtual) stranger told you he or she was getting ready to enter the grocery store or turning in for the night?

On the food retailing front vis-a-vis Twitter, we've recently found a few additional retailers using the micro-blogging site in a significant way, in addition to those we named in our January 18 piece. These grocers include: New Seasons Market, a chain of nine natural foods markets in the Portland, Oregon region; Elwood Thompson's, an innovative natural foods grocer in Virginia; Locali Conscious Convenience, the new hybrid grocery-convenience store that just opened in Southern California, and which we wrote about here on Wednesday, January 21.

Other food and grocery retailers using Twitter include: Wal-Mart; Wegmans, the New York state-based supermarket which was just-named as the fifth best company to work fro in America by Fortune magazine in its annual "100 Best Places to Work" ranking; and the Meijer grocery and general merchandise chain.

The folks at the retail industry consulting firm RetailNet Group have compiled a spreadsheet directory in which they list the Twitter sites of various retailers and retail-related companies, publications and other entities. Click here to view the RetailNet Group Twitter spreadsheet.

Keith Anderson of RetailNet Group says users can add the names of retailers that have Twitter sites but aren't listed as of yet on the directory. In other words it's a user-generated list, which in fact is an additional form of social networking. Anderson and two other staffers at the retailing industry consulting firm have their own Twitter sites. They are:

They frequently post interesting information about the firm's research and other retailing topics, including in the food and grocery sector, at their Twitter sites. It's worth a look.

The vast majority of food and grocery chains, as well as independents, have yet to start using Twitter of other social media sites like Facebook, however. We think they are missing the consumer cyber-communications boat by not doing so. Of course, using Twitter and other sites is one thing -- using it well is another. Retailers and other businesses need to walk a fine line between using the sites too much for marketing, offering a blend of it along with useful and helpful consumer information. Also: making marketing-related communications useful and helpful, which they can be.

Twitter.com is only in its infancy. The site keeps getting deeper and richer -- and users keep finding new ways to communicate on it. In large part that's what makes the site so interesting -- that like the human organism and society it keeps evolving.

But then that's no accident. Fresh & Easy buzz believes that a major part of the popularity of social media and networking Internet sites is because they represent the latest stage of human evolution. Not to get too deep from an Anthropological standpoint but human and social development is all about groups: cultures, societies, voluntary and complex organizations and the like. Social media is evolving and in many cases redefining social organization.

It's no replacement for face-to-face interaction. But it is adding elements to social organization (both informal and formal) that were not dreamed of just a few years ago. And social media retains many aspects of the human experience, albeit via an electronic device and computer screen, which is why it attracts so many.

Social media also is starting to revolutionize the way business, politics and media is done. And it will do so even more. It will require businesses to be more transparent -- and already is -- and will allow businesses, if they use it right, to gain more and richer information and feedback from consumers than ever thought possible.

It's also starting to allow consumers to have far more influence over business, politics and media than has ever been the case. Bottom-up is becoming the new black. Top-down the new Edsel. These facets will only continue to increase as more people -- and companies -- use social media, and as new uses are discovered for sites like Twitter, Facebook and others. It's a brave -- but fun and productive -- new world.
Posted by Fresh & Easy Buzz at 3:25 PM