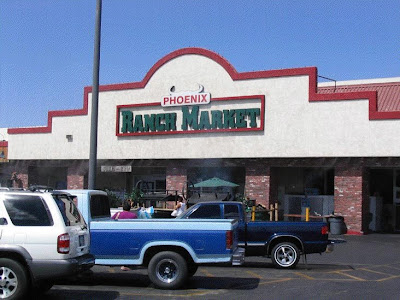 Metropolitan Phoenix, Arizona might be the most competitive food and grocery retailing market in the U.S.

The Phoenix market region might be close to becoming, or could already be, overstored when it comes to the number of stores that sell food and groceries relative to the region's consumer population. There's only so much "share of stomach," after all.

And the Phoenix Metropolitan region, along with the entire state of Arizona, is without a doubt hard hit by the current economic recession, housing foreclosure crisis and credit crisis. Additionally, for the first time in decades, according to the U.S. Census Bureau, Arizona isn't gaining residents but actually losing some.

But these circumstances aren't stopping family-owned Pro's Ranch Markets, which is headquartered in Ontario (Southern) California and has a regional office and a warehouse in Phoenix, Arizona, from opening another one of its Latino consumer-focused supermarkets in Arizona, specifically in the city of Mesa, in the Phoenix Metropolitan region. And like its current five supermarkets in and around Phoenix, Pro's Ranch Markets' new Mesa store will fly under the Phoenix Ranch Market banner, the retail brand it uses for its stores in Arizona.

The new Phoenix Ranch Market supermarket is located at 1118 E. Southern Avenue in Mesa. It's set to open at 10 a.m. on Wednesday, April 29, according to veteran grocer and Pro's Ranch CEO Mike Provenzano Sr, who heads up the family-owned chain that's run on a day-to-day basis by his four sons: Michael, Steve, Rick and Jeff. It's a family affair.

The new 61,320 square-foot Phoenix Ranch Market in Mesa is geared to Latino consumers. However, the store, like all of the grocer's other 11 supermarkets, also offers an ample selection of traditional "American" brands and products, and an abundance of fresh produce, meats, prepared foods and more, which appeal to consumers regardless of their ethnic background.

The Mesa Phoenix Ranch Market store will make 12 supermarkets in four states for the Provenzano clan and their extended family of employees to date.

A peek inside the new Mesa Phoenix Ranch Market

In addition to having aisles and shelves full of dry grocery, household and health and body care products geared to Latino shoppers, along with brands and items for shoppers of all ethnic backgrounds, the new Mesa store offers a wide-variety of in-store fresh foods and other specialty departments. Below is a peek inside the nearly-62,000 square foot Latino-focused Phoenix Ranch Market set to open on Wednesday, April 29, in Mesa, Arizona:

>The new Mesa store will have an in-store fresh bakery. The bakery will feature all varieties of authentic Mexican fresh-baked breads, desserts, pastries and more. It also will offer basic breads and items like donuts and the like.

Additionally, the in-store bakery will be staffed by cake decorating specialists who will prepare customized specialty cakes (birthdays, graduations, ect.) for customers. 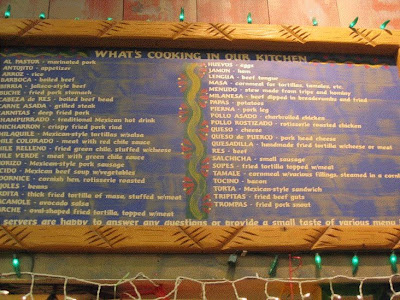 >The supermarket has a large in-store Cocina (fresh, prepared hot foods; cocina means kitchen in Spanish) and a homemade tortilla factory, delivering hot bread and piping hot tortillas throughout the day. The in-store Cocina (see its menu sign above) really amounts to having a number of Mexican and Latin American-style restaurants all rolled up into one in-store area, offering numerous hot foods and dishes from throughout the region.

About the store's centerpiece Cocina and in-store tortilla-making factory, Mike Provenzano Sr.(who's often called "Mike Pro" for short by many in the grocery industry; hence the Pro's Ranch name) says: "The smell of fresh baked bread will greet you at the door. We will be making over 100,000 stone ground tortillas every day. This is home cooking at its finest." 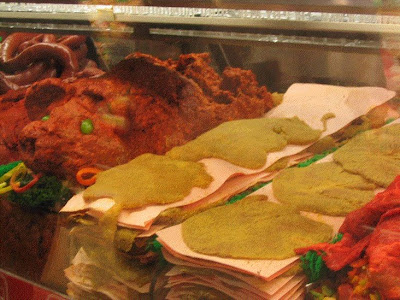 >The store will feature a large meat department -- with both self-service meat cases and a full-service meat counter staffed by butcher's like the one pictured above, in one of the grocer's supermarkets -- that specializes in offering all of the types and cuts of meat used in Hispanic cuisine. "The meat market will also prepare carne asada for BBQ's and hand cut customer orders," Mike Provenzano Sr. says.

There's also an in-store Cremeria where many varieties of fresh, homemade sausages will be made and displayed for sale.

>There's a fresh juice and Aguas Frescas section in the store (part of the Cocina) where the drinks are made daily, along with an in-store fresh fruit bar for grab-and-go refreshments.

>Two other in-store fresh, prepared foods departments are: a complete seafood taco bar and a taqueria and torta meal station.

>And to top it all off, the supermarket has its very own in-store ice cream shop or station. The ice cream station will feature regular flavors of ice cream but specialize in the types and flavors of ice cream popular with Hispanic consumers -- and of course enjoyed by most all consumers, particularly in Arizona where Latino culture and cuisine is eaten by pretty much every resident, be they Italian, Irish, Asian or Heinz-57 American. About forty percent of Arizona's total population is Hispanic.

>The store will also have a complete check-cashing kiosk where customers can cash their checks. Latino consumers often prefer to cash their paychecks and other types of checks at the supermarket, rather than at a bank. Hispanic consumer-focused grocers like Pro's Ranch know this all too well. Therefore they not only welcome check cashing in their stores, they encourage it, and create special stations in the stores to make it easier for shoppers (and for the store' staff) to do so.

The fresh produce department is the centerpiece of the store. It will offer pretty much every type of fruit and vegetable Latino shoppers desire, along with numerous basic produce items consumers of all ethnic backgrounds, as well as Hispanics, desire.

It should be noted that Latino consumers, particularly second and third generation, and first generation who've been in the U.S. for sometime, adopt culinary likes just like Americans of all ethnic backgrounds do, along with retaining a love of traditional Hispanic foods.

They also love and buy brands like Coke, Colgate, Wesson Oil and the like that consumers of all ethnic backgrounds do. As a result, Hispanic consumer-focused retailer's like Pro's Ranch merchandise far more than strictly Mexican and Latin American brands and items in their stores.

And as a result of that fact, Latino consumer-focused format supermarkets are increasingly drawing consumers of all ethnic backgrounds, although Latino shoppers remain the core focus, to them for a variety of reasons: low prices, lots of fresh foods, specialty produce, meats and seafood not available at mainstream supermarkets, and the Mexican and other Latin prepared foods offered. Mexican food is about as mainstream as food can get in the U.S. -- especially in the Western U.S.

The fresh meat and seafood department at the new Mesa store is huge by traditional standards, and offers an extensive variety of items. Fresh Meat, fish and seafood (like produce) are signature departments in any supermarket worth its salt that caters to Latino shoppers.

And when it comes to fresh fish and seafood, Mike Provenzano Sr. is making a major claim about his new store in Mesa. He says the supermarket's expanded fish department will carry the largest variety of fresh fish and seafood of any store in Phoenix. If that turns out to be the case, we suspect the selection will appeal to shoppers of all ethnic backgrounds.

The new Mesa Phoenix Ranch Market store also offers numerous local touches, according to Provenzano Sr. The signature feature of those local touches from a store design perspective is a large wall mural of the early years of Mesa, Arizona that faces the checkout stands in the store's front end.

The store, like the grocer's other five stores in the Phoenix area, will carry a strong selection of produced-in-Arizona fresh foods, groceries and other items.

Mike Provenzano calls the new Mesa supermarket and its format an "upscale" market for the Mesa consumer. While Latino consumers remain his primary target, he clearly wants to draw shoppers of all ethnic backgrounds into the new supermarket.

"My family puts their heart and soul into these stores. My sons and I are proud of the communities we are in and want to give back to the neighborhoods that we work with," he says. "We take great care in building each store, providing the best food and service anywhere." 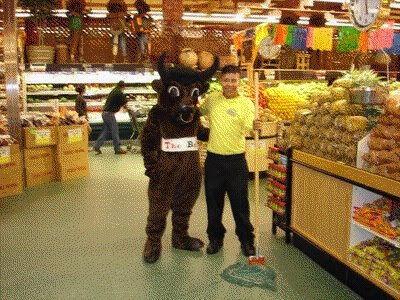 For example, the small chain has its own official mascot, "Ranchie the Bull." "Ranchie" (pictured above with a produce clerk posing for a photographer) visits each of the 11 (soon to be 12) stores regularly, putting a particular focus on and giving most of his attention to the little shoppers in each supermarket.

In fact, "Ranchie the Bull" even has his own "kids' club" for Pro's Ranch Markets' youngest shoppers. [You can learn more about the "kids' club" here.

Rumor has it that "Ranchie" will be front and center and trolling the aisles for new and existing little members of his "kids' club" when the new Mesa store's opening on Wednesday.

Love the pig sculpture made out of the ground pork. Reminds me of the corner butcher shop when I was growing up.