The UK Telegraph Reports on Tesco Fresh & Easy's Use of Twitter.Com; Since Fresh & Easy Buzz Was First to Report it, We Offer Some Added Value 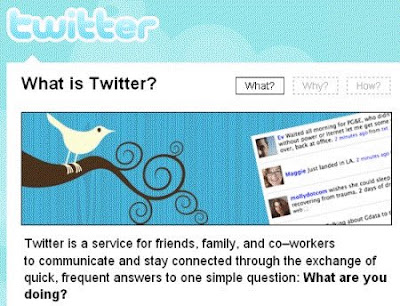 James Quinn, Wall Street Correspondent for the United Kingdom's Telegraph newspaper, has a story in today's edition of the paper's Web site about Tesco's Fresh & Easy Neighborhood Market "becoming one of the first British retailers to use the Twitter.com social networking site to communicate with consumers." [You can read the UK Telegraph story here.]
Fresh & Easy Buzz was the first publication to report in September, 2008 in this piece about Tesco's Fresh & Easy using Twitter. [Click here to view Tesco Fresh & Easy Neighborhood Market's Twitter.com site.]
Fresh & Easy Buzz also has a Twitter site, so we hang out a bit in the neighborhood. [Click here to view Fresh & Easy Buzz's Twitter.com site.]
We received links to the UK Telegraph story today from a couple of the followers of our Twitter.com feed. Therefore, since Fresh & Easy Buzz was the first publication to report on the development five months ago, we thought we would add some information to the Telegraph's report.
First, Fresh & Easy's presence on Twitter.com isn't being maintained by a Tesco Fresh & Easy company employee based out of its Southern California headquarters or by a Tesco PLC employee in the UK. Rather, the Fresh & Easy Neighborhood Market Twitter site is maintained on a regular basis by SallieB, who is a social marketing expert with Tesco Fresh & Easy Neighborhood Market's public relation's firm, ABCO Worldwide. She works out of the firm's Sacramento, California office. SallieB also has her own Twitter site here, where she describes herself as a "Social Media-ette, PR/PA, West Coaster, and self professed nerd."
Additionally, there's a bit of a "Tesco" corporate mystery regarding Twitter.com. The mystery has nothing to do with the Fresh & Easy twitter site and feed.
The mystery: Either United Kingdom-based Tesco, which owns and operates Fresh & Easy neighborhood Market USA, or someone using the "Tesco" name has had a site on Twitter.com for a much longer period of time than its Fresh & Easy USA division has maintained a Twitter site for. However the "Tesco" feed has never been active. No updates have ever been given. "Updates" is Twitter.com lingo for the brief posts (called "Tweets" by users) users make on their Twitter sites.
The "Tesco" site does currently have two followers though, the UK-based supermarket industry trade publication Retail Week and yours truly, Fresh & Easy Buzz. [Click here to view the "Tesco" Twitter site.]
We have no idea if it's the "real" Tesco or not that put up the Twitter.com site. It could be though because some companies will "lock-up" their company names on social media sites either for future use or to make sure others don't use the name. We first discovered the "Tesco" feed about mid-2008. But to date nothing has been posted on it.
Twitter and food-grocery retailers
A few U.S. food and grocery retailers are currently using Twitter. But far fewer are using it than should be. The site is free, other than the cost of whatever amount of time an employee spends each day maintaining it, which need not be more than an hour in total on any given day.
Some of the food and grocery retailers using Twitter.com include Whole Foods Market, Inc., which has 19,119 followers. A couple regional Whole Foods' divisions, such as the one in Los Angeles, California, also maintain their own individual Twitter feeds as well.
Mega-convenience store chain 7-Eleven also has a Twitter.com site.
A group of fans of the specialty grocery chain Trader Joe's also have set up a site on Twitter. This type of Twitter site can be much more powerful than a retailer-maintained site because it offers the potential of positive third-party (consumer) endorsement for Trader Joe's, something the grocer gets a significant amount of on the Twitter feed. Of course, a group of people could set up a similar feed about a retailer and offer mostly negative comments in general or on a particular aspect of that retailer's business practices, as well. So goes the double-edged power potential of social media and marketing.
A number of other retailers, including E-commerce retailers, also maintain sites on Twitter.
Growing power of social media and marketing
Nearly 60% of U.S. consumers say they interact with companies on a social media Web site, and one in four interact more than once per week, according to the results of the 2008 Cone Business in Social Media Study, according to an October, 2008 story in the Natural~Specialty Foods Memo Blog.
The results come form the 2008 Cone Business in Social Media study.
The Cone survey also found that a whopping 93% of Americans believe a company should have a presence in social media, while 85% believe a company should not only be present, but should also interact with consumers via social media.
Those are rather impressive percentages -- the kind of percentages that should convince those food and grocery retailers currently not using social media sites like Twitter, Facebook and others to do so.
Twitter user numbers growing fast, uses evolving
The number of people, businesses and organizations using Twitter is fast-growing. Additionally, the types of uses people, businesses and organizations are adopting Twitter for are becoming more varied as well. For example, the New York City-based U.S. Embassy of the government of Israel recently staged what it termed a "citizens" press conference regarding its invasion of the Gaza Strip using Twitter. This was the first time the government of a nation has done something like this. [You can learn more about the "citizens" press conference here.]
Meanwhile, we suggest if the "Tesco" site on Twitter.com belongs to the "real" Tesco, UK-based Tesco PLC, that perhaps the company hire SallieB to maintain the Twitter feed, along with her doing so for the Fresh & Easy Neighborhood Market Twitter site. After all, your two lonely followers -- if it's the "real" Tesco -- Retail Week and Fresh & Easy Buzz -- have been waiting many months for the first update.
Posted by Fresh & Easy Buzz at 3:49 PM

The innovative Virgina, that will soon open a new store in Washington, D.C. as well, natural foods retailer Elwood Thompson's also has a Twitter feed, if you want to add the retailer to your list. The grocer uses Twitter in an active manner.