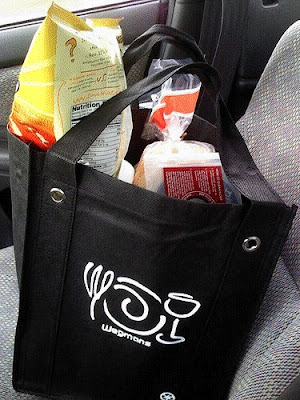 The award-winning supermarket chain invited shoppers to bring in a single-use plastic carrier bag filled with additional thin plastic bags, and in exchange receive a free Wegmans' reusable canvas shopping bag like the one pictured at the top, which sells for just 99-cents in the stores.

Wegmans' then had all of the single-use plastic grocery bags brought in by shoppers and collected by the stores recycled.

We think the Wegmans' Earth Day-Earth Week event is a creative example of how food retailers can encourage shoppers to use reusable bags, while at the same time doing another good -- collecting a bunch of single-use plastic carrier bags that would most likely have ended up in a landfill but instead were recycled.

The supermarket chain said it decided to hold the event on Saturday rather than on Wednesday, the actual Earth Day, so that it could reach more shoppers. Saturday's are generally the number one grocery shopping day in terms of the number of customers that go to the store.

And of course, the "green bag" promotion's creativity also serves as a smart marketing device for Wegmans, which recently was named the number one supermarket chain in the U.S. by Consumer Reports magazine, based on the non-profit group's extensive national survey of shoppers and their favorite food and grocery stores.

Wegmans' also was named for 2008, and has been for the last 11 years, as one of the top places to work in the U.S. in Fortune magazine's annual "Best Places to Work" survey. Wegmans' was rated by Fortune as the fifth best place to work in America for 2008. The 2008 rankings came out this year. The 2009 rankings come out in 2010.

According to Jason Wadsworth, Wegmans' sustainability specialist (yes, they have one of those), the Saturday, April 25 shopper bag exchange event was a big success. Wegmans' collected bags full of single-use plastic carrier bags and handed out numerous free reusable shopping bags in its 72 stores.

The Saturday bag exchange event was part of a nearly-day long (11 a.m -to- 3 p.m.) Earth Day celebration inall 72 of Wegmans' supermarkets, centered on the what Jason Wadsworth and Wegmans' call "the three R's of environmentalism": Reduce, Reuse and Recycle.

In addition to the bag exchange, the event included tastings of organic and locally-produced foods throughout the stores' aisles from 12 p.m -to- 3 p.m. Saturday, along with educational activities and other in-store "green" happenings stressing those three R's of environmentalism.

"In the nearly 40 years since Earth Day was proclaimed in 1970, many of us have become more aware of how our daily activities can have an impact on the planet – from the kinds of lights we use at home, to the bags we use to carry our purchases, to the kind of car we drive. Earth Day is an annual reminder for people, businesses, and communities to review where things stand and to explore better options," Wadsworth said in explaining the thinking behind Wegmans' Earth Day event on Saturday, April 25.

"Choosing organic foods is another shift toward greater sustainability, and customers were able to sample organic foods throughout the store, while learning about the practices that go into growing and producing these delicious foods. These include innovative technologies to lower energy use, reduce water used for irrigation, and reduce reliance on artificial fertilizers and pesticides," Wadsworth added about the Earth Day event.

Wegmans' first introduced reusable shopping bags into its stores in 2007.

Last year the privately-held supermarket chain, which had estimated 2008 gross sales of a whopping $4.8 billion for its just 72 supermarkets, according to various industry ranking sources, added a new, thicker, stronger plastic bag in its stores as part of its carrier bag offerings, according to Wegmans' sustainability specialist Wadsworth. The thinking behind the introduction being that by adding the stronger plastic carrier bags, more shoppers would ask for them and reuse them, unlike is normally the case with the thinner single-use bags, which generally get tossed in the garbage after consumers unpack their grocery purchases at home.

Wadsworth says that since introducing its various varieties of reusable bags (in 2007), offered at various price points, along with offering the stronger plastic bags last year, the supermarket chain has reduced the volume of the thin, single-use plastic carrier bags it uses in its 72 supermarkets by 30% thus far.

The retailer's goal is to encourage as many of its customers as possible to bring their own reusable bags to the stores, which is why it held the bag exchange event and regularly creates other promotions designed to encourage and increase shopper use of reusable bags.

We think Wegmans' model of offering the bag exchange -- bring a single-use plastic carrier bag full of more single-use plastic carrier bags to the store, get a reusable shopping bag in turn. -- is an excellent model for food and grocery retailers in California, Nevada and Arizona, the three states where Tesco currently has its 119 small-format grocery and fresh foods markets in. For that matter, the reusable bag promotion is a good one for grocery retailers throughout the U.S. and globally to adopt and offer in their stores a few times each year.

The promotion creates shopper awareness, keeps some single-use plastic bags out of landfills and waterways, puts reusable bags into the hands of consumers who likely aren't already using them, and overall increases awareness on the reusable bag use topic.

Additionally, for food and grocery retailers in California, the single-use plastic bag issue is heating up once again in a major way. Legislation that would put a 25-cent per bag tax on single-use plastic carrier bags and paper grocery sacks is working its way through the California State Assembly Natural Resources Committee at present. [See our April 16, 2009 report here: Virginia Congressman Jim Moran Introduces First-Ever Federal Single-Use Bag Fee Legislation Into U.S. House of Representatives on Earth Day 2009.]

Because they are in the direct line of fire as the retail format that uses the most plastic bags, food and grocery retailers often get a major part of the blame for the single-use plastic bag problem in the U.S., as well as elsewhere in the world.

Creative promotions like Wegmans' bag exchange therefore a good way for grocers to demonstrate their commitment to reducing plastic and paper bag use and in promoting reusable bags.

We think bag exchange programs modeled on Wegmans' April 25 event offer grocers in California, Nevada and Arizona (and elsewhere), such as Tesco's Fresh & Easy and its competitors, a great tool to promote and encourage greater shopper use of reusable bags. We hope to see bag exchange programs like Wegmans hitting stores in the three states soon.

April 23, 2009: Strategy Session: The In-Store Reusable Bag-Sharing Program -- A Way For Grocers to Significantly Increase Reusable Bag Use Among Shoppers

HEB does that in Texas on Earth Day, FYI

It's a good idea but I like the free bag giveaways as well. Hits those who don't bring plastic bags with them. You have to know about it before hand. Not always the case.

As a transplanted upstate New Yorker (to Southern California) I miss Wegmans. Think the stores would be perfect for California. For those not in the know, think a combination full supermarket and a Whole Foods Market under one roof.