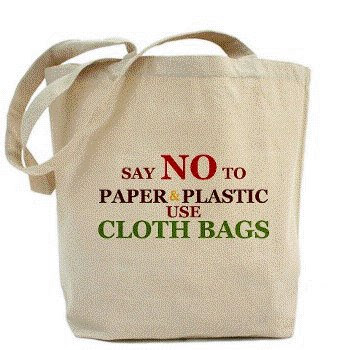 The authors of the bag-fee bills working there way through the California State Assembly in Sacramento hope if passed the legislation will make the message on the reusable bag above a reality in the Golden State. [The bag pictured above is available here.]

Two nearly identical bills that if passed would require supermarkets, large drug stores and convenience store chains to charge shoppers 25-cents for each single-use plastic carrier bag and paper grocery bag they request are currently working their way through the California State Assembly in Sacramento.

Both bills would if passed require the retailers to charge customers a fee of 25-cents for each single-use plastic carrier bag and paper grocery sack they request at checkout. That amount is subject to being modified as the bills work through the various Assembly committees.

The two bills are being discussed and debated this week in the Assembly Natural Resources Committee. Assembly Member Brownley is a member of that committee.

It's expected that the two bills will eventually be merged into a single bill, most probably AB 2058, then co-authored and supported by both Brownley and Davis, along with picking up additional co-authors. Both AB 2058 and AB 87 currently have co-authors.

A similar bill, AB 2050, which carried a 15-cent per bag charge as its central feature, was passed out of committee in 2008 and was set to be voted on by the full Assembly. [Read our reports here - April 20, 2008: Earth Day 2008: California Bag-Fee Bill AB 2058 Passes California State Assembly Natural Resource Committee; Next Stop Appropriations Committee; and here - April 13, 2008: April 13, 2008: California State Assembly Natural Resource Committee to Vote on Statewide 25-cent Single-Use Plastic Carrier Bag-Fee on Monday.]

However the bill, along with numerous others, was never voted on in the 2008 session because of the budget stalemate the California Assembly and Senate were in at the time. Because the legislature was so late in reaching a budget agreement, any bills that hadn't been voted on by the whole Assembly were shelved.

A key feature of the bills is that the fee applies to both plastic and paper bags. This is because a central feature of the legislation is to encourage shoppers to bring reusable shopping bags to the store with them.

Supermarkets and large drug chains in California are required by state law to sell reusable bags in the stores.

It's too early to tell for sure but our analysis is that the single-use plastic carrier bag fee legislation has a high probability of passing in the full Assembly. If that happens, the legislation would then go to the California State Senate for debate and eventual vote. In order to become law a bill must be passed by both bodies and signed by the Governor.

Many California retailers, particular chains that operate stores throughout many cities in the state, are supporting the legislation because they want a uniform law (as uniform as you can get since cities in California can still pass their own municipal bag fee laws or bans under what's called "home rule" in the Golden State) rather than having to deal with a patchwork quilt of different plastic bag fee laws and bans in cities throughout the state.

Many retailers also prefer the bag fee over outright bag ban laws which a have now passed in cities like San Francisco, Manhattan Beach and Palo Alto. Numerous other cities are discussing enacting either single-use plastic carrier ban laws or bag fee legislation.

There also appears from our research to be a majority consensus in both the Democrat majority Assembly and Democrat majority State Senate that a statewide bag fee law should be passed this year, despite the economic recession.

We expect either both AB 2058 and AB 87, or a combined bill, to be sent to the Assembly Appropriations Committee for debate and discussion as early as today or tomorrow. Appropriations decides when to discuss and debate bills sent to it from other committees.

Fresh & Easy Buzz will be follwing the bills as they work through the California Legislature, and will keep out readers informed of the status.

Tesco's Fresh & Easy Neighborhood Market offers only free single-use plastic carrier bags in its 118 grocery and fresh foods stores in California, Nevada and Arizona, unlike nearly all of its competitors, which offer a choice of free plastic or paper.

About half of Tesco's current 118 Fresh & Easy Neighborhood Market stores are in Southern California (and three in Bakersfield). The other about half are split between Metropolitan Pheonix, Arizona and southern Nevada.

Like all major food and grocery retailers in California, Fresh & Easy offers reusable carrier bags for sale in its stores.

The grocer offers an inexpensive reusable bag it calls "Bag for Life" for 20-cents each. The bags are made out of a clear, plastic-like material. Fresh & Easy offers to replace the bag for free whenever it wears out. The bags are popular in the United Kingdom, where Tesco is based.

Fresh & Easy also offers an inexpensive reusable canvas tote bag ,which it sells for 99-cents each, along with a couple other canvas bag offerings.

In Ireland, which passed a bag-fee law a few years ago, the government says that sense the legislation was passed, single-use plastic carrier bag use by retailers (and thus consumers) has decreased by a whopping 94%

Austin, Texas-based Whole Foods Market, which self-banned single-use plastic carrier bags in its stores a year ago on Earth Day 2008, says since doing so it's seen customer-use of reusable bags triple in its stores.

The natural grocery chain, which has 297 stores (over 50 in California) and $8 billion in annual revenue, also says in the year since eliminating the single-use plastic carrier bags it's diverted about 150 million of the bags from landfills but not offering the thin bags in its stores. Whole Foods Market still offers customers free paper grocery bags, which are made out of at least 50% post-consumer recycled paper and are 100% recyclable, in its stores. [Fresh & Easy Buzz - April 9, 2009: Competitor News: One Year Since Eliminating Plastic Bags in Stores Whole Foods Market Says Reusable Bag Use Tripled; 150 Million Bags Out of Landfills.]

Whole Foods' gives shoppers who bring their own bags at least 5-cents per bag credit off their grocery orders for each bag used as a way to offer an incentive for reusable bag use. West Sacramento-based Raley's supermarkets also does this, as do a growing number of other grocers.